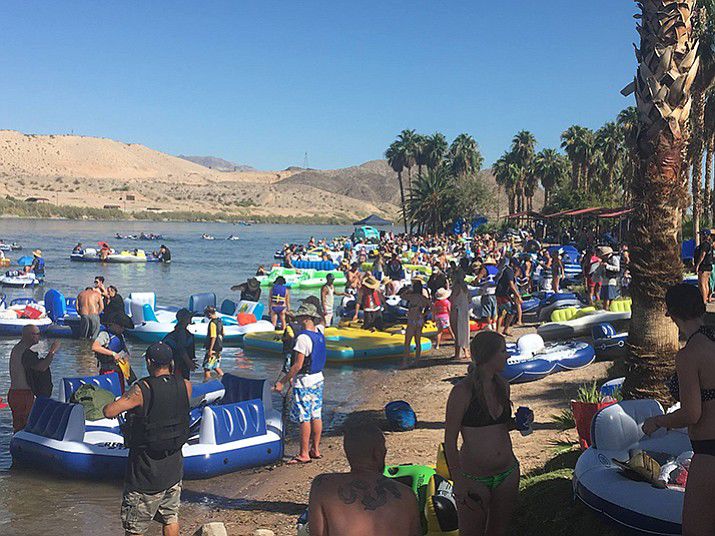 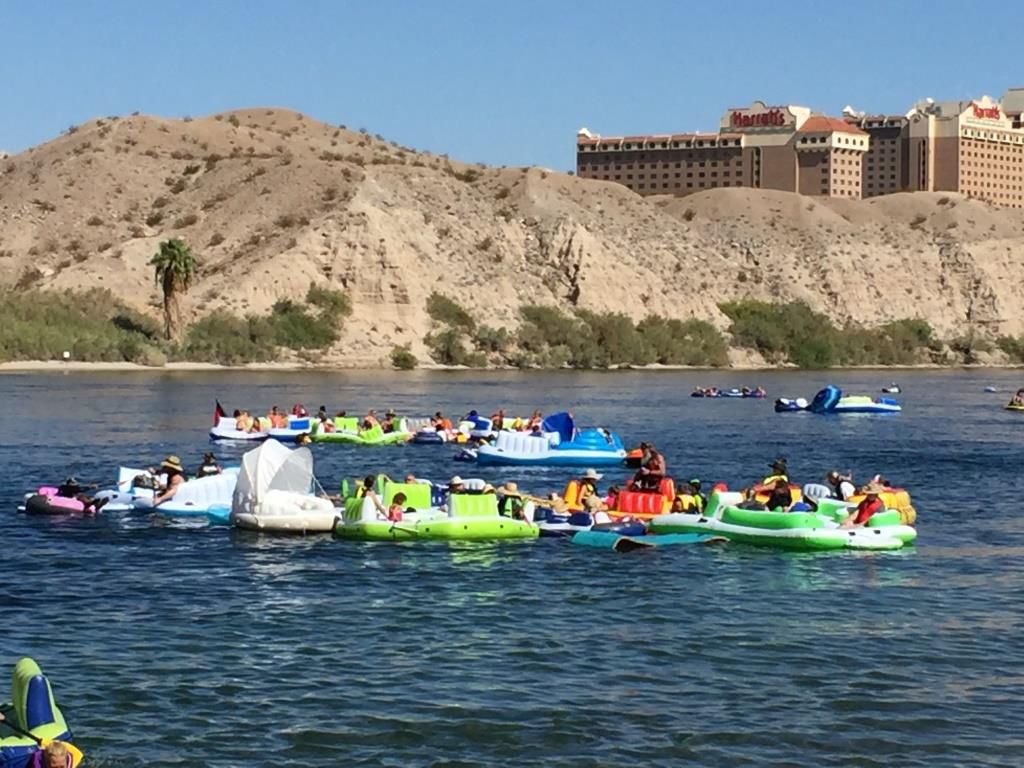 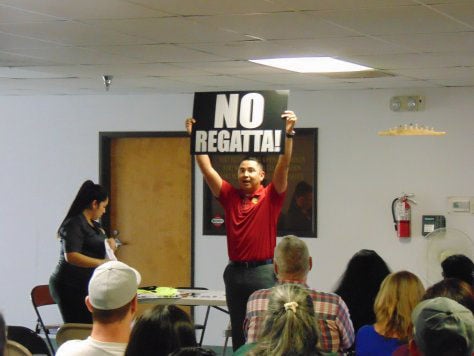 Fort Mojave Indian Tribe Chairman Tim Williams spoke during the meeting and let the people in attendance know what they can do to help make sure the Colorado River is protected and kept clean during and after the event. 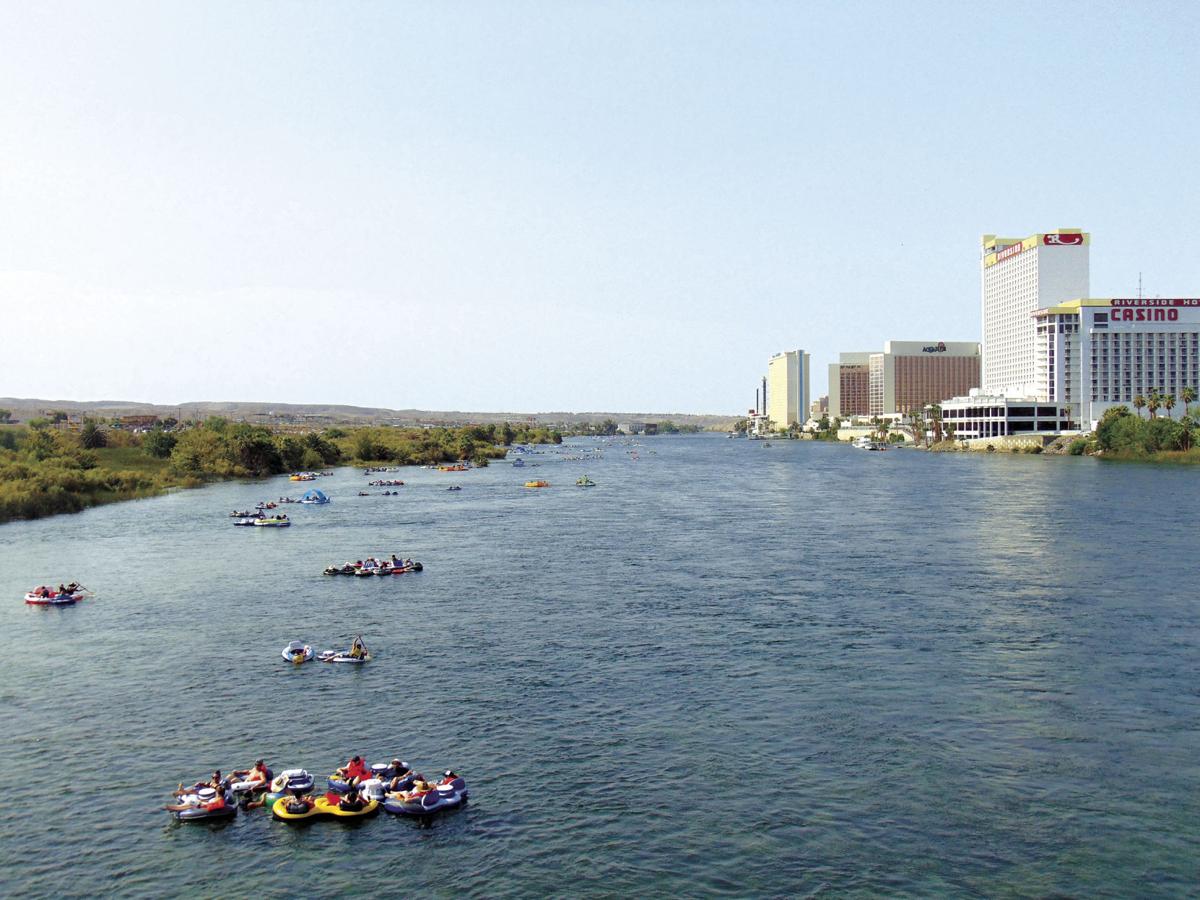 A group floats down the Colorado River near Laughlin, Nev., on Saturday.

Fort Mojave Indian Tribe Chairman Tim Williams spoke during the meeting and let the people in attendance know what they can do to help make sure the Colorado River is protected and kept clean during and after the event.

A group floats down the Colorado River near Laughlin, Nev., on Saturday.

The Laughlin River Regatta has been canceled for 2019.

Las Vegas-based Golden Entertainment, which bought the Colorado Belle and Edgewater casinos in a $190 million deal earlier this year, sent a letter to Mohave County announcing the end of the popular Colorado River tube float.

The event was scheduled for Aug. 10.

The Laughlin River Regatta, which has attracted up to 30,000 people, returned last year after a two-year absence. Critics of the event, including the Fort Mojave Indian Tribe, complained about bad behavior and litter. In 2016, Bullhead City Police arrested five people during the event.

Because of the complaints, it was shut down in 2016. It returned in 2018 after Marnell Gaming, the former owner of Edgewater and the Colorado Belle casinos, agreed to dedicate staff and money for river cleanup after the event.

KINGMAN – Anthony Marnell isn’t about to throw the baby out with the bathwater.

The Bullhead City River Regatta attracted more than 30,000 participants on Saturday and kept…

It’s still too early to determine what effect, if any, the cancellation of the 2019 Laughlin River Regatta will have on the Parker Tube Float.…

I think I might have come up with a solution. Why not have an event with girls in bikini's and be able to get as drunk as you want only have it at the dump.

Another typical case where a fun event is ruined because people can't respect the land. It like going to a bar or someones house party and think hmmmm what can I screw up tonight....D bags. No respect so good for them unfortunately they will just go piss on someone else's party.

Maybe the answer is too hold the event every three years or so this way the local economy sees a little bit of money. Maybe the park rangers should be involved as well as local law enforcement and fire departments. With a few changes it can be a good time for everyone.

[thumbdown] okay close the regatta down along with the entire river ,including lake Havasu..we don't want any trash or urine or feces in the water ! Make it so there is no boats no swimming no fishing,no camping. Put a fence around the entire length keep every one and every animal out including dogs. Not ! Just think the regatta generates millions of dollars for the trip state area.the taxes for gasoline ,food,camping,supplies or gambling.think restaurants stores mechanic shops ,,,,everyone prospers from the regatta just because you don't like to do it don't mean it shouldn't be done.go to Laughlin right now and walk down the river walk,there is tons of trash in the water look over the railing at the aquarious you will see.this is just the start of summer Everytime it gets windy trash blows into the river. Last year the regatta was very clean with trash bags handed out to everyone the rafts were not being abandoned but thrown into dumpsters if unwanted.you know I have seen lots of blowing through the streets of Havasu on windy days and along the shores of the lake where does all that go? The grates at Parker dam.so the Indians that complain so much they burn hay fields that drop tons of ash and bebri into the river along with pesticides that are sprayed that eventually end up in our water.. so this regatta is not so bad after all is it? It gets blamed for a lot of things it is not responsible for. Yes regatta......'Some people are just beyond stupid and feel they have the right to interfere in the very personal and private decision '....that's a take out from the guy complaining so much on here about the regatta

Wow! You really have a litany of problems with living here don't you? And sorry to say "everyone" does not (did not) profit from the regatta - BHC to be specific. I don't know what the "trip state" is, but I guess it's important to you. I haven't been to Laughlin in quite awhile but if there are now literally "tons of trash' just over the railing at the Aquarius (I assume that is the place you were talking about) there is something seriously wrong and God knows we don't what even more trash from a bunch of drunks being added to that and pushed down river. Effective use of the river and the lake does not include having thousands of drunks trashing upstream.

Ahhh, heck! You mean we won't be treated to the mass of trash and effluent pumped into the river by thousands of drunks? Ahhhhhhhhhh.

Might I ask how many times you volunteered to clean the beaches of the trash tossed in our river by the thousands of drunks upriver each August, year after year? Did you ever check out the trash racks at Parker Dam clogged to the point it endangered power production because of garbage thrown in our river by the thousands of drunks Bullhead City set adrift on our river to poop, pee and toss overboard everything from cans to coolers to lawn chairs? I realize clean water is not something you are interested in, but the majority of us who live along the river want it clean!

Hello there, HR. I could not agree with you more! The health and condition of the Colorado River should be primary. If this event is an annual trash festival, and adults cannot use this resource in a responsible and ethical way, the event should be cancelled!! I am pretty much fed up with the actions of stupid, irresponsible adults!