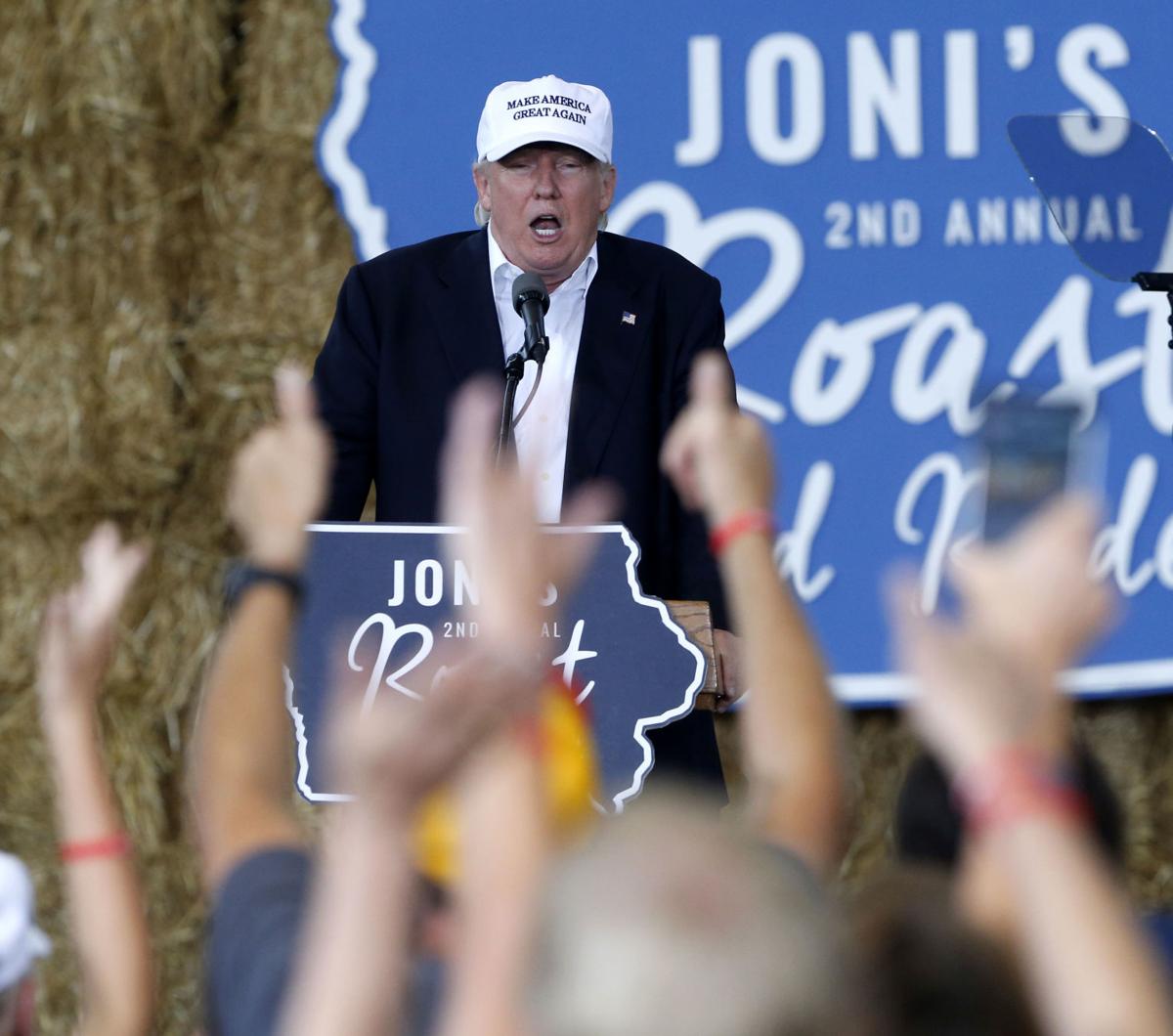 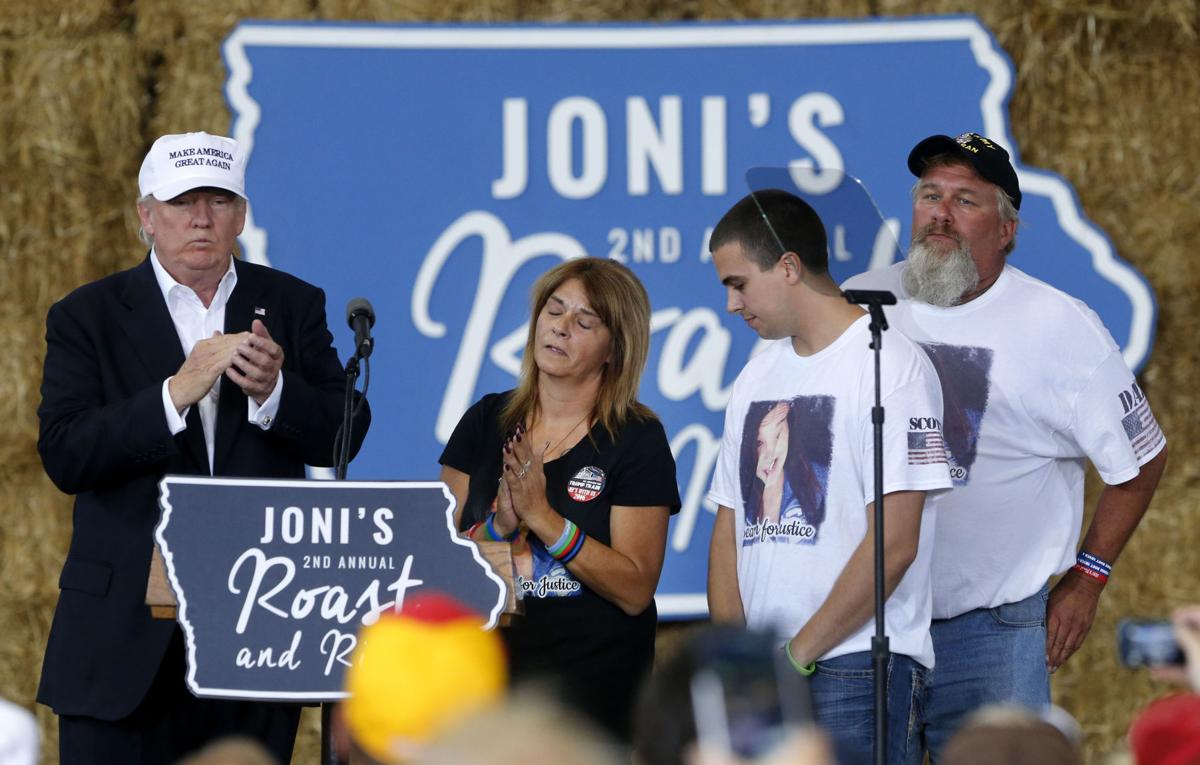 Republican presidential candidate Donald Trump shares the stage with the family of Sarah Root at Joni's Roast and Ride at the Iowa State Fairgrounds, in Des Moines, Iowa, Saturday, Aug. 27, 2016. Second left is Sarah's mother, Michelle Root, brother Scott Root, and father Scott Bernhardt. Sarah Root was killed earlier this year after her car was hit by another. The driver, who was drunk, was a reportedly Honduran immigrant living in the country illegally. (AP Photo/Gerald Herbert) 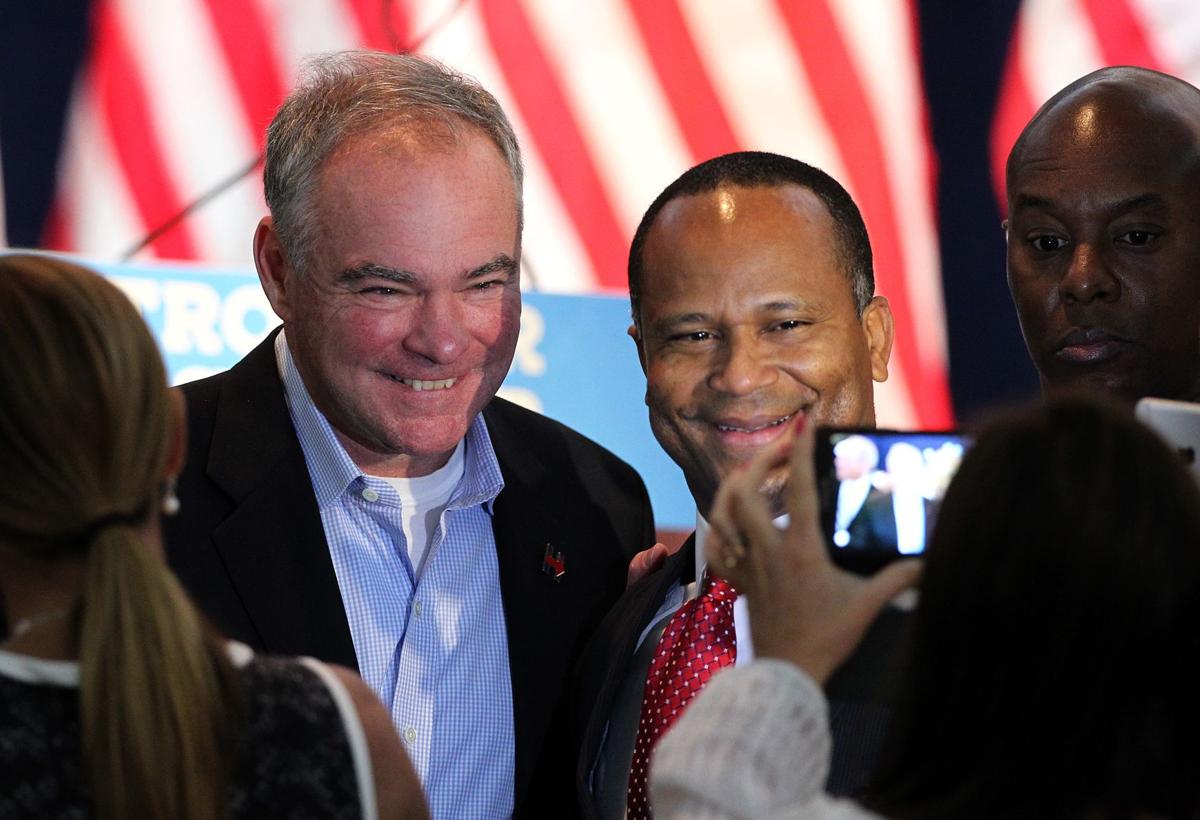 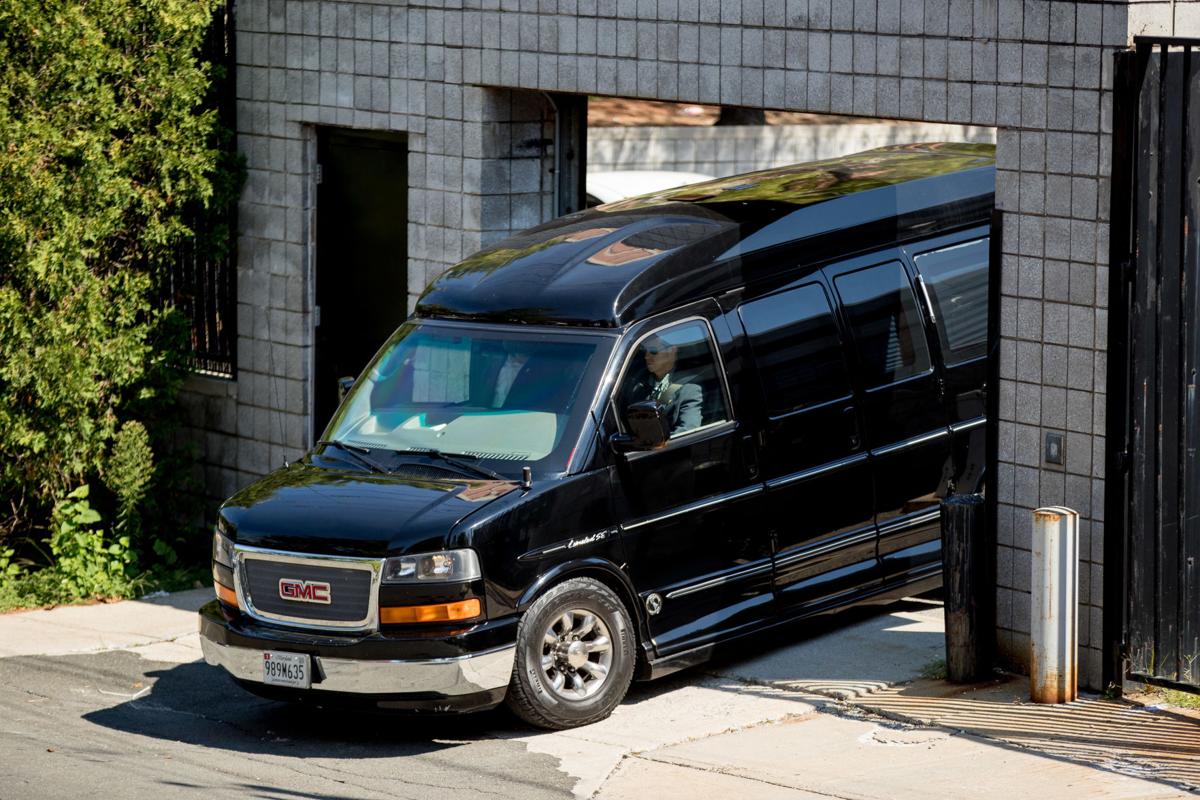 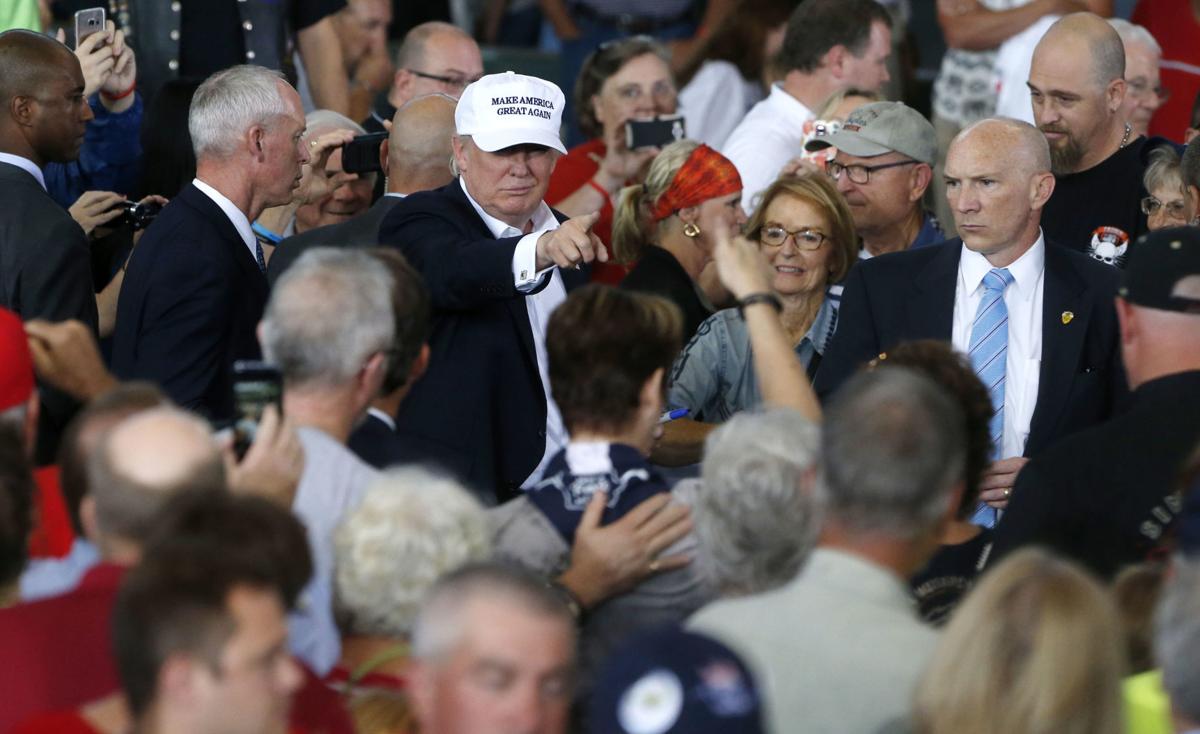 Republican presidential candidate Donald Trump shares the stage with the family of Sarah Root at Joni's Roast and Ride at the Iowa State Fairgrounds, in Des Moines, Iowa, Saturday, Aug. 27, 2016. Second left is Sarah's mother, Michelle Root, brother Scott Root, and father Scott Bernhardt. Sarah Root was killed earlier this year after her car was hit by another. The driver, who was drunk, was a reportedly Honduran immigrant living in the country illegally. (AP Photo/Gerald Herbert)

DES MOINES, Iowa  — Donald Trump warned Saturday of a "war on the American farmer," telling a crowd in Iowa that rival Hillary Clinton "wants to shut down family farms" and implement anti-agriculture policies.

Trump skipped the 42-mile motorcycle ride that preceded the event in a state where polls show a tight contest, a rare bright spot for Trump amid a sea of challenging battleground states. Joining him on stage were top Iowa Republicans — among them Ernst, Gov. Terry Branstad, Sen. Chuck Grassley and Rep. Steve King — in a rare show of support for a candidate who has struggled to unite his party.

In a hat tip to Iowa's agriculture industry, Trump renewed his commitment to continuing a requirement that all gasoline sold contain an ethanol-based additive, an issue important to corn growers. He also promised to cut taxes on family farms, which he called the "backbone" of the country.

Branstad, in an interview with The Associated Press prior to the speech, said he felt that Trump could score points against Clinton by focusing on agricultural issues. Branstad, whose son runs Trump's campaign in the state, said he also hopes Trump would launch campaign ads there and that he sees the race as "about even."

"I don't like that but, hopefully, that's going to change," Branstad said.

Speaking to an overwhelmingly white crowd, he again pledged that as president he would help African-Americans living in cities with high crime and low employment. He offered no specifics for how he would achieve that goal. He also continued to criticize Clinton for branding young criminals as "super-predators" in comments more than 20 years ago.

"Remember that? 'Super-predators,'" he said. "And they were very, very insulted. But now people have forgotten." Clinton's primary opponent, Sen. Bernie Sanders, had criticized her for the remark, and she has since apologized for it.

Amid his ongoing appeal to black voters, Trump drew an online backlash Saturday for a tweet he sent in response to the shooting death of NBA star Dwyane Wade's cousin, who was gunned down near the Chicago school where she had planned to register her children.

"Just what I have been saying. African-Americans will VOTE TRUMP!" Trump tweeted. He later sent a tweet offering his "condolences to Dwyane Wade and his family."

Campaigning in Florida, Clinton running mate Tim Kaine said, "We just ought to be extending our sympathy to the family," and added, "That's the only reaction that's appropriate right now."

Clinton met Saturday for more than two hours with intelligence officials at the FBI office in White Plains, New York, for her first overview of the major threats facing the nation around the globe since becoming the Democratic nominee. Trump received his briefing earlier this month, a customary move for major party nominees but one that has been the subject of a political tussle during the campaign.

Trump also previewed his immigration plans at the Iowa event, saying that he was developing an "exit-entry tracking system to ensure those who overstay their visas, that they're quickly removed." The proposal echoed the language of Trump's former primary rival, New Jersey Gov. Chris Christie, who is now advising him.

What political news is the world searching for on Google and talking about on Twitter? Find out via AP's Election Buzz interactive. http://elections.ap.org/buzz

Trump says he plans to give immigration speech in Arizona

US shoppers find some groceries scarce due to virus, weather

Benjamin Whitely headed to a Safeway supermarket in Washington D.C. on Tuesday to …

Biden all but concedes defeat on voting, election bills