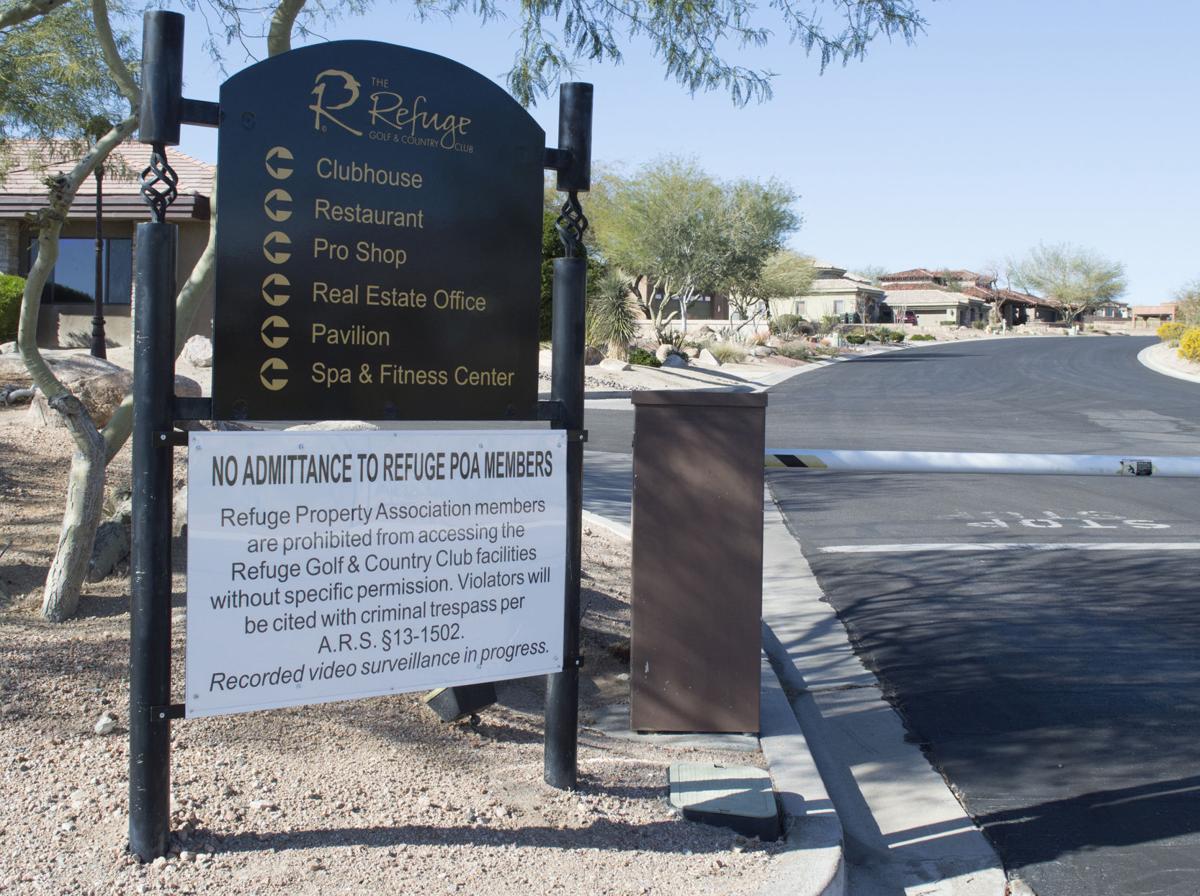 A sign displayed at the clubhouse entrance says Refuge POA members will not be admitted to the club, citing an Arizona state statute.

Although the Refuge Golf and Country Club recently notified some Refuge Property Owners Association members they were no longer allowed on the property, the course still remains open to Lake Havasu City residents.

A sign displayed at the clubhouse entrance says Refuge POA members will not be admitted to the club, citing an Arizona state statute.

Although the Refuge Golf and Country Club recently notified some Refuge Property Owners Association members they were no longer allowed on the property, the course still remains open to Lake Havasu City residents.

The legal battle between Refuge Golf and Country Club and property owners won’t be heading to the Arizona Supreme Court, but drama could be unfolding elsewhere if the Refuge is selected as a location for a Bravo TV show.

On Tuesday, the court declined a petition submitted on behalf of Refuge Country Club owners Jerry and Cindy Aldridge requesting the court reverse previous rulings that, among other decisions, blocked plans for an RV park on the property. The possible TV show would have nothing to do with the current legal proceedings, Jennifer Geisser of NBCUniversal said in an email Wednesday.

As TV producers consider the Refuge, a trial court will decide how attorney’s fees will be handled. According to the appeal’s court 2016 decision, a trial court ruled in March 2014 to award more than $2.35 million in attorneys’ fees plus taxable costs against Refuge Owners, which was then appealed.

On Jan. 5 of this year, the appeals court granted the plaintiff’s application for attorneys’ fees and awarded $130,000 in fees and $262 in costs to Thienes Appellees against the Refuge owners.

Since then, some Refuge Community Association members were banned from the country club and remained unwelcome after the Supreme Court decision.

“The Supreme Court has decided not to hear our case regarding the nuisance claim injunction that closed the RV Park four years ago. The injunction may be modified by a simple agreement between the Refuge POA and the Golf Club however, the Refuge POA Board has refused to have any meaningful discussion regarding mitigation of the nuisance. Accordingly, the Club is still off-limits to the non-equity members of the Refuge Community Association,” Jerry Aldridge said.

In a Dec. 7 letter responding to a previous settlement offer from the RGCC owners, attorneys representing homeowners said negotiations would be tricky and could require board approval and other member-approved amendments.

Attorneys representing the homeowners did not immediately return calls for comment on Wednesday.

The Refuge Golf and Country Club has apparently closed its doors ­­­­­­­­­— and a sale to the nearby property owners could be pending.

Good lord- millions in fees? Seriously- absolutely ridiculous- people should be ashamed of themselves. Each and every one of you spoiled brats deserve what you get. Greed unlike anything ever witnessed in the history of this community. Meanwhile- you're employees struggle to survive. I'm disgusted.

Whether it be boats, UTVs, RVs, or even a hot air balloon - Lake Havasu City resid…

Shortages are on the menu.