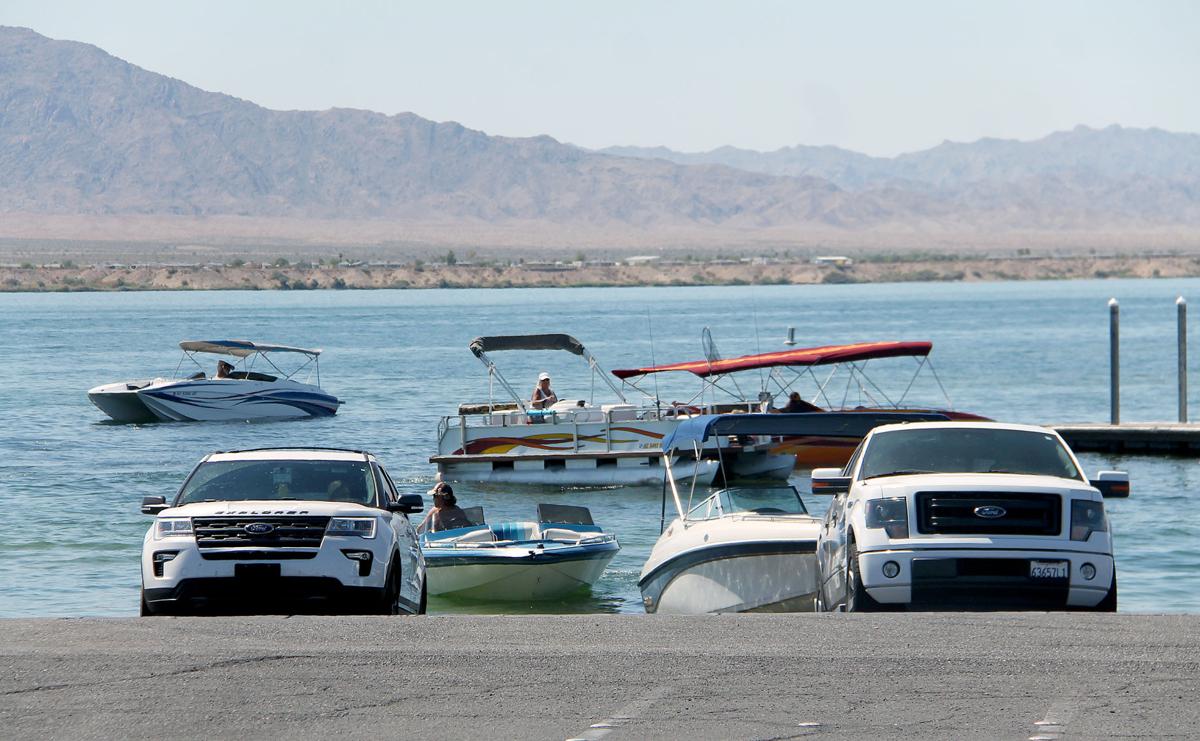 Boaters are expected to visit the launch ramps at Lake Havasu State Park in force during the Fourth of July festivities. With a reduced park capacity due to the ongoing coronavirus pandemic, park officials are advising patrons to come as early as possible, plan to stay all day once inside the park, and have a backup plan in place to kill some time if park reaches capacity and has to close its entrance for a few hours. 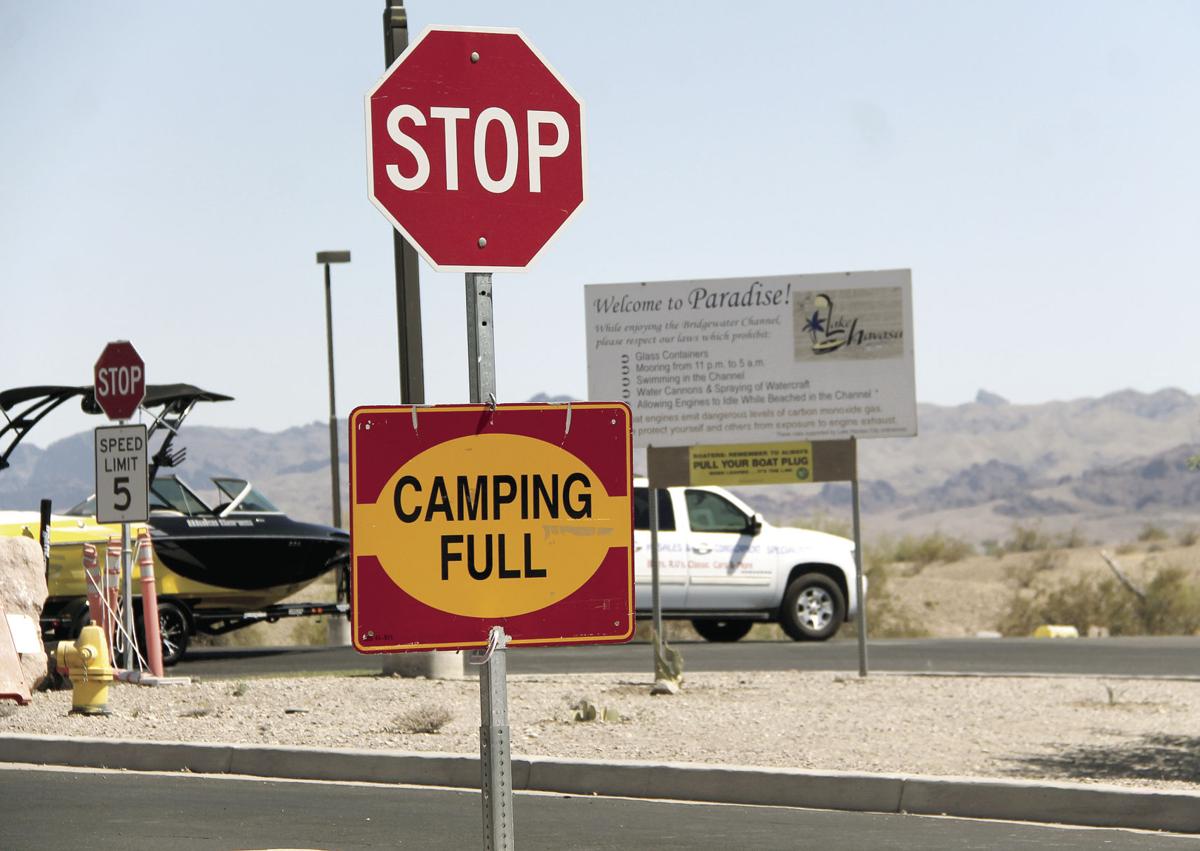 The campground at Lake Havasu State Park is booked to its current capacity, not only through the Fourth of July weekend, but through the entire month of July.

Boaters are expected to visit the launch ramps at Lake Havasu State Park in force during the Fourth of July festivities. With a reduced park capacity due to the ongoing coronavirus pandemic, park officials are advising patrons to come as early as possible, plan to stay all day once inside the park, and have a backup plan in place to kill some time if park reaches capacity and has to close its entrance for a few hours.

The campground at Lake Havasu State Park is booked to its current capacity, not only through the Fourth of July weekend, but through the entire month of July.

Guests are already starting to show up in town for what Lake Havasu State Park officials are expecting to be another busy holiday weekend in Havasu.

The Fourth of July is one of the busiest times of year in Lake Havasu City.

The year 2020 has been anything but a normal year as the coronavirus pandemic has disrupted regular business and travel, but Roddy said the state park has actually been significantly busier over the last couple of months than in previous years and Havasu seems to have an unseasonably large influx of visitors as well.

Even during the health crisis, this Memorial Day weekend was about as busy as it has ever been, and Independence Day seems to be shaping up the same way.

Hotel rooms and short-term rental units are hard to find online for Lake Havasu City for the weekend, and those that are still available are at a greatly inflated price.

“We have been so busy over the last two months — that hasn’t changed,” Roddy said. “If you ask anybody right now they will probably tell you that everything is booked up for the Fourth of July. We are too. We have had people arriving already. We have had a lot of phone calls leading up to it. So we anticipate everything is going to be active and at capacity throughout the weekend. It might start as early as Thursday, but for sure Friday, Saturday and going into Sunday it will be important to please plan ahead, please get here early, please be patient, and be kind to your neighbor.”

Although the park has seen an influx of visitors over the past couple months, Roddy said the park has also reduced its capacity to encourage social distancing and safety measures.

That has led to several temporary closures of the park, especially on Saturdays. On Memorial Day weekend, the park entrance was closed for a few hours on both Friday and Saturday once the park was determined to be full.

“We can see 500 or 600 people an hour coming into the park,” Roddy said. “If that is sustained over a couple hours that really makes a difference. On Friday, Saturday and Sunday that is what you are dealing with. If that sustains for two or three hours that is when the capacity issues start coming in.”

Although Roddy said most of the parks policies and procedures are the same as they were on Memorial Day, there is a larger emphasis on limiting group sizes and encouraging social distancing.

“Those have been a real point of emphasis where we may not have been as stringent with people coming in having more than 10 people,” Roddy said. “I can tell you today and throughout this week if somebody comes to our door and they have more than 10 people they have been turned away. We are trying to be sure that we are following what the CDC tells us. That and the social distancing are big focus points right now just like the mask has been more important over the last couple weeks to us here.

“We recognize the changing dynamic and we try to adjust accordingly. That has always been our practice, all the protocols we have had in place are still in place. Some of them are just getting a little more focus than others.”

As for social distancing, Roddy said they don’t want to separate families or groups of less than 10 that come together. But they will be watching for areas where several groups, or boats are combining and mingling together. Roddy said if groups aren’t maintaining space and being “good neighbors,” that will likely cause the park to close the entrance earlier than it otherwise might have.

Roddy said social distancing issues haven’t been very common in the park yet.

“We have been fortunate in that is has been a very limited number of people we have had to go re-educate and intervene, but we do it when we need to,” he said.

Roddy said the goal is to keep the park shut until employees are confident that they can reopen without closing again for the rest of the day. That means once the entrance shuts its doors, they will likely stay closed for at least a couple hours. Roddy noted that every time the park has closed it has been able to reopen its doors that same day to resume entry into the park.

Open on the 4th of July,Thanks Cal..Lake Havasu City's new motto is coming.."Die like you mean it!!!"

I thought they were going with, "Profits over People"?

Havasu will be on National news soon with sick sick people. Sad

"They're baaaaaa-aaaack!" One of those holidays that falls on a weekend and this year it could not happen at a worse time as the 'play like you mean it" crowd is here early for their 4th celebration. We were the last to close, early to reopen and now in the face of a surge in numbers of those infected we reclose, but limit the closures so as not to upset our visitors. Why did we not reclose the channel to boaters? Why did we not close the park Ramada's and our beaches? Our Mayor is missing in action, too busy managing his resort instead of taking on the responsibility of his office. Many visitors and residents are being put in harms way as the numbers shall dictate after this 4th of July weekend. Covidfornia, where a majority of the revelers come from, is now at #2, with 230,891 infected, while Arizona, 79,215 infected, blew by Michigan to take the #10 spot on the Wordometer website. https://www.worldometers.info/ In our small community we were at 45 infected before Memorial Day, today, 7/1, 255 infected are reported with another surge guaranteed following this coming weekend. “The only thing that we learn from history is that we learn nothing from history.”

The City Elected officials have really set us up. Once again, it will be a free for all, and then in a couple of weeks, the numbers will spike again. Seriously, Can the Mayor and Supervisors do something? Anything? At all? Stay home, Mask up, and don't be kissing on anyone you don't know.....#HAVEASAFE4TH

They are doing their part, they are educating not mandating to slow the spread of the virus. Want an education, take a gander at the results of their actions this weekend in the channel. In a past life our Mayor had to have captained the Titanic on its maiden voyage!

They need to mandate but educating isn’t working.

As COVID-19 worsens, AZ is the first state to enact ‘crisis care’ standards

Arizona’s failure to contain COVID-19 means the state has the dubious distinction of being the first in the nation’s history to activate crisis standards of care for hospitals, according to a top administrator at the state’s largest hospital system.

The post As COVID-19 worsens, AZ is the first state to enact ‘crisis care’ standards appeared first on Arizona Mirror.

For environmental organizations throughout the Southwest, getting federal protecti…