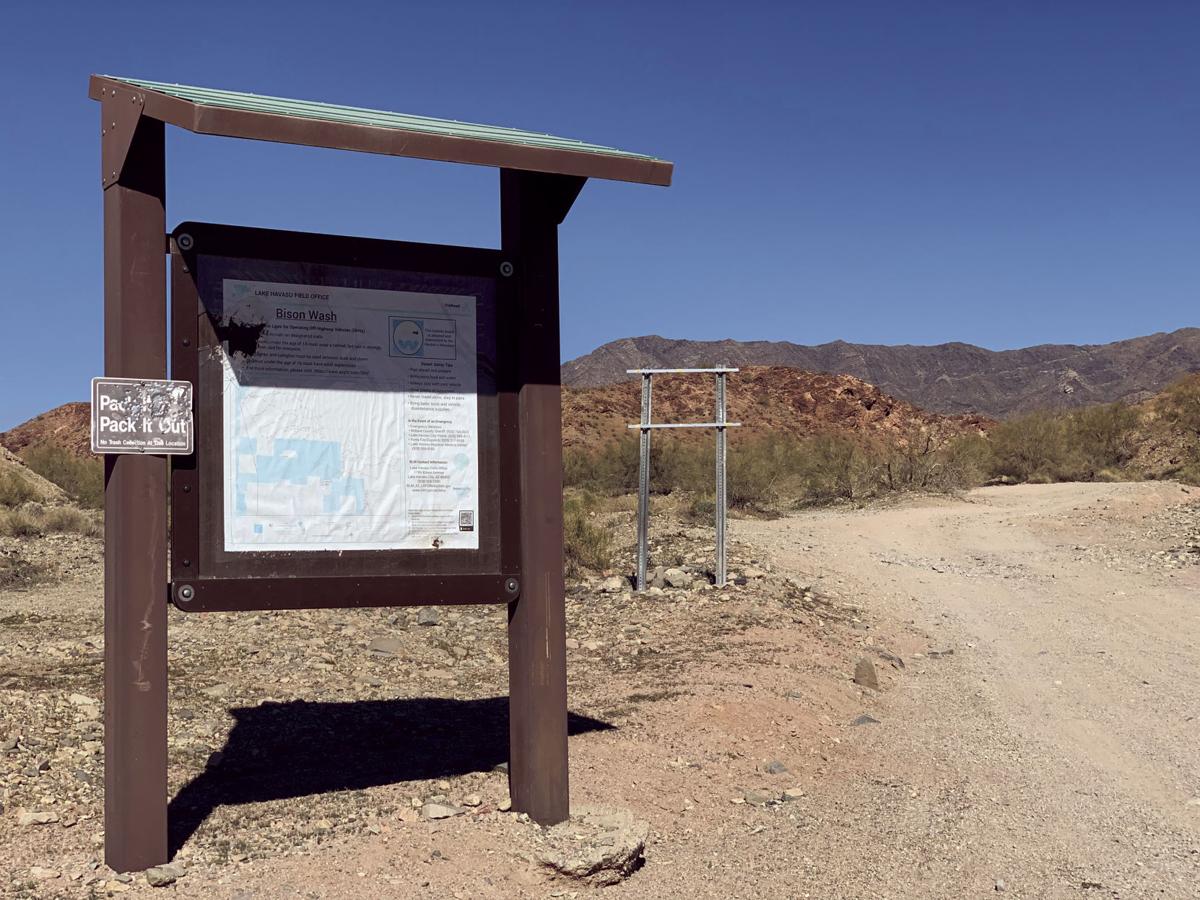 The entrance to the Bison Wash recreational area informs visitors about the landscape. A brand new sign explaining that explosions are prohibited used to stand behind the kiosk. It was shot down in two days, according to nearby residents. 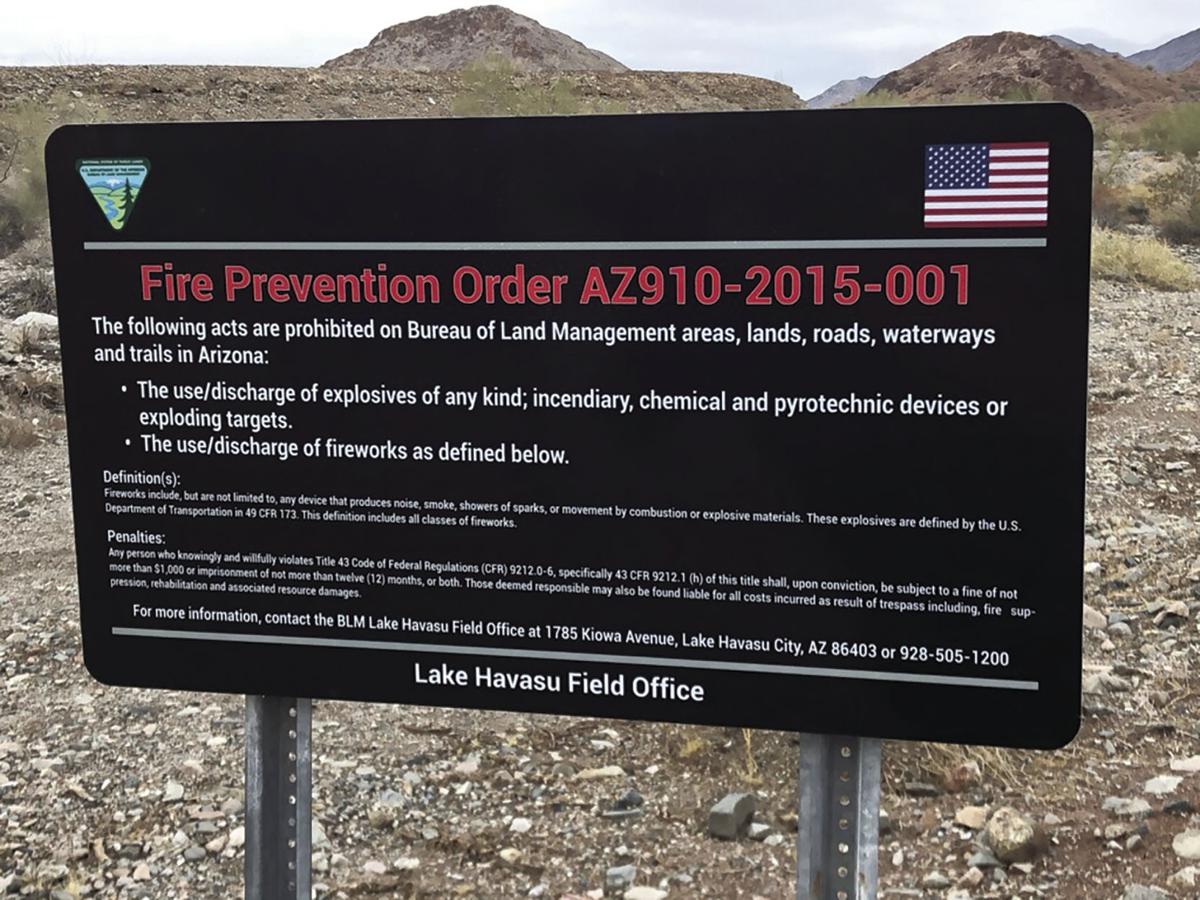 These brand new signs will stand at the entrance of the BLM’s Bison Wash area to warn residents that explosions and fireworks are not allowed.

The entrance to the Bison Wash recreational area informs visitors about the landscape. A brand new sign explaining that explosions are prohibited used to stand behind the kiosk. It was shot down in two days, according to nearby residents.

These brand new signs will stand at the entrance of the BLM’s Bison Wash area to warn residents that explosions and fireworks are not allowed.

Explosions and bullets too close for comfort continue to be an issue for residents along the city’s northeastern border near Bison Wash, an area that is maintained by the Bureau of Land Management.

But the BLM is working to mediate the problem through new signage and increased patrols.

“Our law enforcement rangers spend their days out on patrol of local public lands,” Valerie Gohlke of BLM said. “Just in the Lake Havasu Field Office area, they patrol about 1.2 million acres. Because of the amount of area to be covered, they are absolutely doing their best to protect the public lands and resources.”

Patrolling the desert has been a solution suggested by concerned residents along Havasu’s border, but most of the wilderness that surrounds the city to the north and east is state land. The Arizona State Land Department does not hold any law enforcement authority, so that job falls to local jurisdictions.

But there is a small strip of BLM-managed land that follows the Bison Wash area and leads out to the mountains that guard Havasu to the northeast — and that land is being patrolled by rangers.

In addition to the BLM rangers already out in the field, the Lake Havasu Field Office just filled a vacant position.

“The new law enforcement ranger is working diligently learning the area, getting to know the community and meeting residents,” Gohlke said.

New signs were also placed by BLM at the entrance to the Bison Wash area, where the trails meet Paso De Oro Drive. The signs explain Fire Prevention Order AZ910-2015-001, which outlines what acts are prohibited on BLM “areas, lands, roads, waterways and trails in Arizona’’ — and the penalties for violating the restrictions.

The signs explain that the use of explosives and pyrotechnic devices, including exploding targets, are not allowed on BLM lands. Those who violate the rules can face fines of $1,000 and up to 12 months in prison. They can also be held liable for costs stemming from damage they cause.

Cat Szymaczak, who lives on nearby Colt Drive, said the signs were shot down within two days.

Syzmaczak said that shooting was never really a problem since they purchased their home seven years ago, and she enjoys the sport herself so it didn’t bother her.

But explosions are a different story.

“Within the last two years, the explosions — whether Tannerite or something much more severe — have increased a lot,” she said. “I have a 90-pound Rottweiler. When these explosions happen, he shakes uncontrollably and looks for somewhere to hide.”

Residents like Szymaczak have also described explosions so close and loud that their homes shake and windows rattle.

Close off the area east of Bison Blvd. and Falls Spring Wash to motorized vehicles and more damage. SARA Park is far too crowded with hikers---the city needs another area where residents and visitors can get away from noise, dust, and destroyed desert.

Adding to the problem is the trash that some leave behind. This is a great area and fun for target practice with a lake view! Last week we went there and found a small fire with pallets still burning from the night before along with blown up tv's, furniture, and scrap metal. I don't have a truck, but will help load one up and cover the dump fees...

Start making examples of the ones you do catch like confiscating their $30,000.00 ATV's. By doing so it won't take long to curb the problem.

Simon, your lost. People with 30,000 toys aren't the trash. I see local young trash from here and people from trashy CA. I have a truck and am willing to help clean up the Desert that me and my family love and enjoy as off roaders. Young locals and out of towners are the cause

No more events on the London Bridge

City officials have decided to heed the warning “better safe than sorry.” After Fe…

Bill could launch study for toxicity in sport fish

Lake Havasu has produced some world-record sport fish, but an effort in the Arizon…