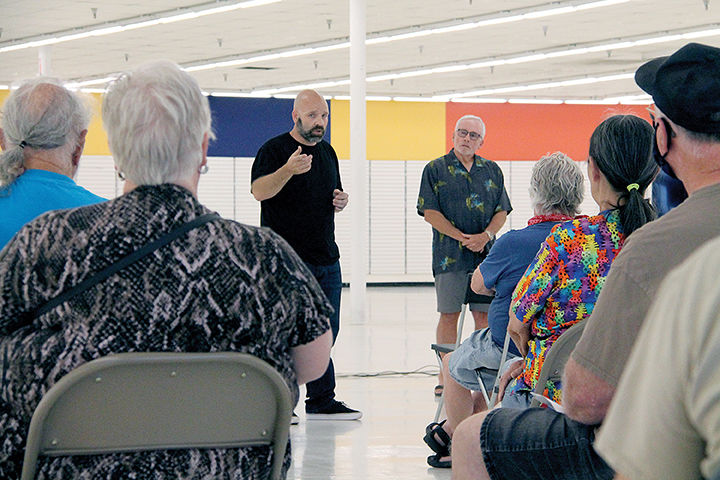 PMG Companies CEO Ryan Busnardo answers questions from those gathered during the public applicant meeting on Monday at the former Kmart building as the building owner Rich Heine looks on. Premier Manufacturing Inc. is working on a rezoning planned development for the property which would allow it to set up an advanced manufacturing facility. 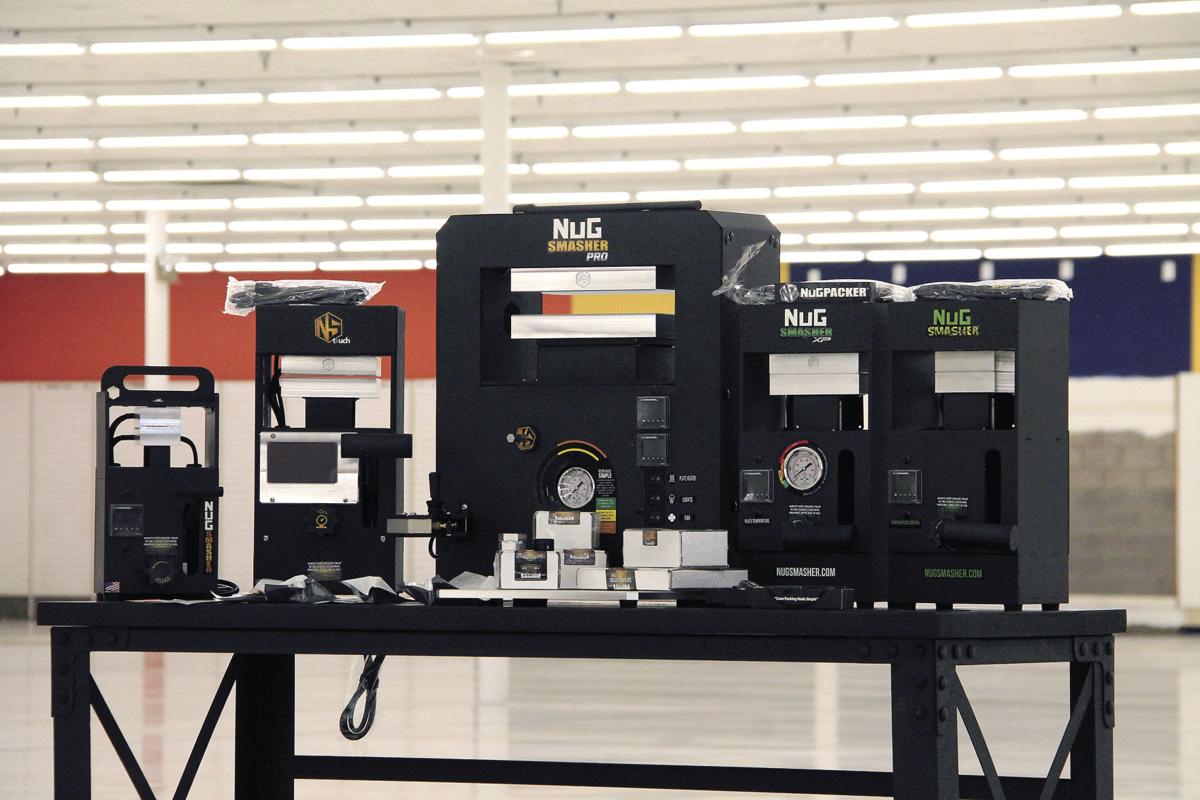 The primary product produced by Premiere Manufacturing is the Nug Smasher, which can be used to extract THC from cannabis, CBD from hemp, as well as extracts from food or essential oils.

PMG Companies CEO Ryan Busnardo answers questions from those gathered during the public applicant meeting on Monday at the former Kmart building as the building owner Rich Heine looks on. Premier Manufacturing Inc. is working on a rezoning planned development for the property which would allow it to set up an advanced manufacturing facility.

The primary product produced by Premiere Manufacturing is the Nug Smasher, which can be used to extract THC from cannabis, CBD from hemp, as well as extracts from food or essential oils.

The owners of the former Kmart building have found a new tenant for the  facility left vacant when the large retailer closed down its operation in February. But a rezoned planned development is needed in order to make that vision a reality.

Premiere Manufacturing Inc. is looking to open up an advanced manufacturing plant in Lake Havasu City and in the process relocate its base of operations from its current location in Corona, California. The company’s main product is called the Nug Smasher, which was originally designed to extract THC from cannabis using heat as pressure. CEO Ryan Busnardo said since it was created about 5.5 years ago they have also discovered that it also is efficient in extracting CBC from hemp, and other essential oils.

The machines would be built almost entirely from scratch using raw materials with the assistance of CNC robotic assisted machines to create the templates of production. Busnardo said the process is very quiet, and there shouldn’t be any extra noise created outside of the building. He also said that the company will not store any of its materials or completed products outside due to the cost and nature of the products.

Rich Heine, co-owner of the shopping center, and James Gray, CEO of the Partnership for Economic Development, said they visited Premier Manufacturing’s facility in Corona and confirmed Busnardo’s claims about his manufacturing process.

Busnardo said the company would eventually ramp up to 250 jobs, which he said average $1,600 per week company-wide, with the lowest paid employees making about $16 per hour.

Gray told those gathered at the meeting that 250 jobs would make them a top 10 employer in Havasu. Busnardo said he hopes to have about 60 to 80 employees in Havasu in about 12 months, then as many as 120 in two years. He said it will likely take about four years to ramp up to full capacity with 250 workers.

In order for Premiere Manufacturing to be able to operate out of the old Kmart building, a zoning change is required. Currently the property is zoned Commercial Healthcare District but they have submitted a request with Lake Havasu City to go through the planned development process to allow for their planned use of the facility.

The informal citizens meeting on Monday was for property owners within 300 feet of the proposed zoning change, and is the first step in the required process to rezone a property. The request is currently before city staff, and is scheduled to go before the Planning and Zoning Commission on July 22, and to the City Council for a final vote at the Aug. 25 meeting.

About 27 people showed up at the meeting on Monday and asked questions about the proposal. Many of the citizens were nearby business owners who voiced some concerns about what the proposal would mean for their business. The business owners didn’t seem to be outright opposed to the proposal. Questions included how manufacturing would affect business, parking in the shopping center, and what the company’s plans for the outside of the building and the parking lot where.

Heine said he has looked at lots of other potential retail tenants for the building but hasn’t been able to find any takers for that large of a space. He said they also looked at dividing the building up into thirds, but still struggled to find any tenants.

Gray said retailers are closing, not just in Lake Havasu City but throughout the state and the country and it looks like they are not coming back, at least in the same form. Gray also stressed the importance of having an occupied and healthy business in the large building on McCulloch Boulevard as a major key to the shopping center’s viability as a whole.

The way people shop is changing and has been for years. With the rise of online shopping and…

Lake Havasu City could see its last “Blue Light Special” next month, after an announcement t…

A manufacturing company with eyes on the old Kmart building would become a top 10 employer in Lake Havasu City, according to Partnership for E…

An industrial tenant wasn’t the first choice to replace Kmart in the shopping center on North McCulloch Boulevard, but it was the most realist…

Premiere Manufacturing, Inc is the latest of CEO Ryan Busnardo’s companies. He said his facility in Corona, California started out as a car de…

‘Nug Smasher’ will build machines to serve pot industry, others

I do not think that the Kmart building and area are zoned for a mfg facility........It is a retail area, always has been, not MFG...

Think about it,, 250 jobs with zero investment from the city. $6 million investment created only 20 jobs. I would say this is a better deal for havasu.

The owners of the former Kmart building have found a new tenant for the 1,002 square foot facility. Fake news

Saying "fake news" just proves ignorance unless actual details are provided. Now tell exactly who the new tenant is - otherwise you are the purveyor of "fake news."

Coming from California would automatically give the company a tax break.

Just be sure it is safe. I know they had a big fire at this type of plant(I believe) in downtown L.A. last month due to storing chemicals

This company builds extractor machines for purchase. The company in LA that caught fire was a distributor of CBD and THC oils. Totally different kinds of businesses. https://nugsmasher.com/

It is also true that if they are building pressure vessels they must comply with the American Society of Mechanical Engineers Code which is a law and not some type of recommendation. The same laws that have prevented boiler explosions in the U.S. for generations.

Well I don't know but it doesn't sound too bad considering a starting teachers salary is about $18.40 per hour and that is for someone with a Bachelor's degree in education. We are a bunch of cheapskates in Havasu when it comes to paying people what they can easily make twice as much for in some other community. Here is a link to the Bureau of Labor Statistics for our area. You can easily see why so many of our young people are leaving Havasu for greener pastures.

Sounds reasonable and the rezone should go ahead. However, if they want tax breaks - NO!

Could care less what kind of smasher they make, just as long as somebody actually follows through with the jobs.

28 new virus cases reported in Mohave County, including 16 in Havasu

Restaurants adjusting to new spike in coronavirus cases in Havasu