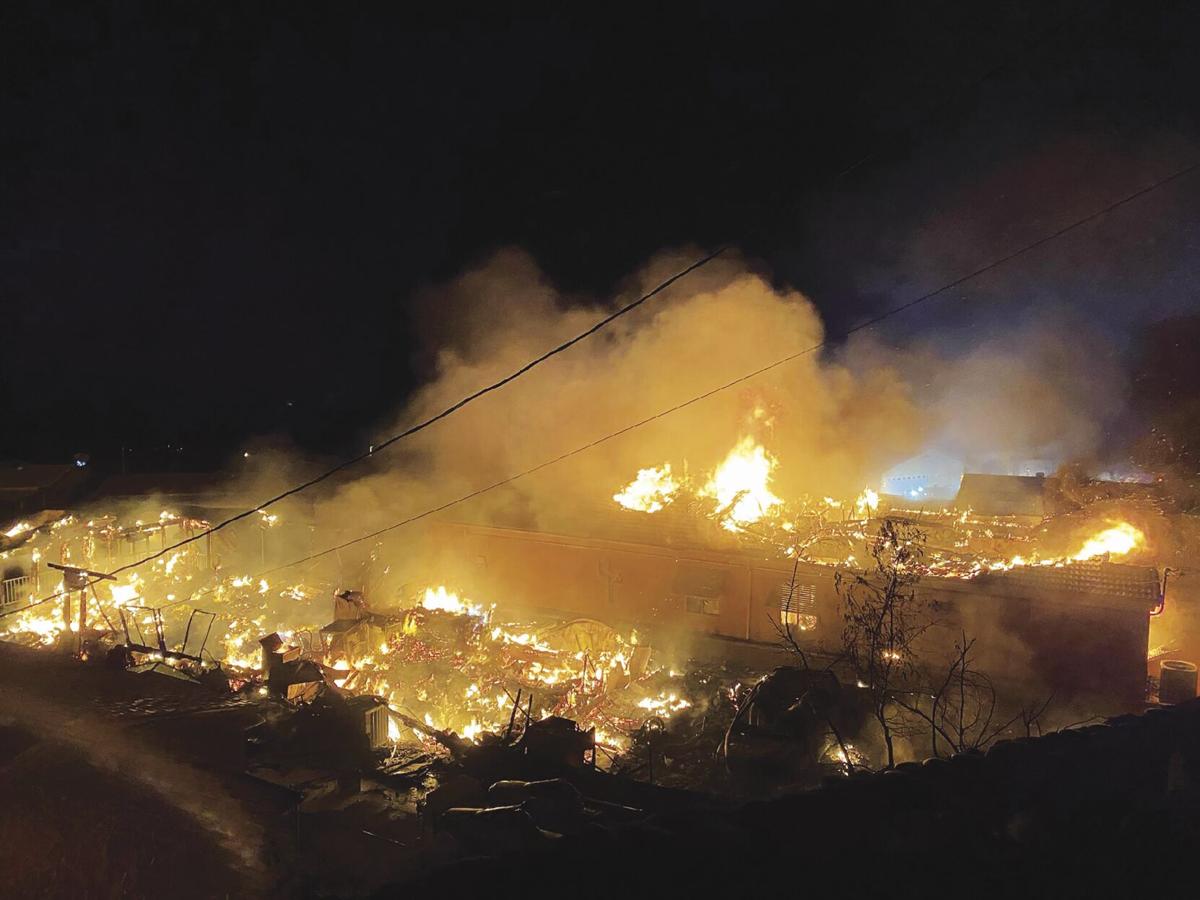 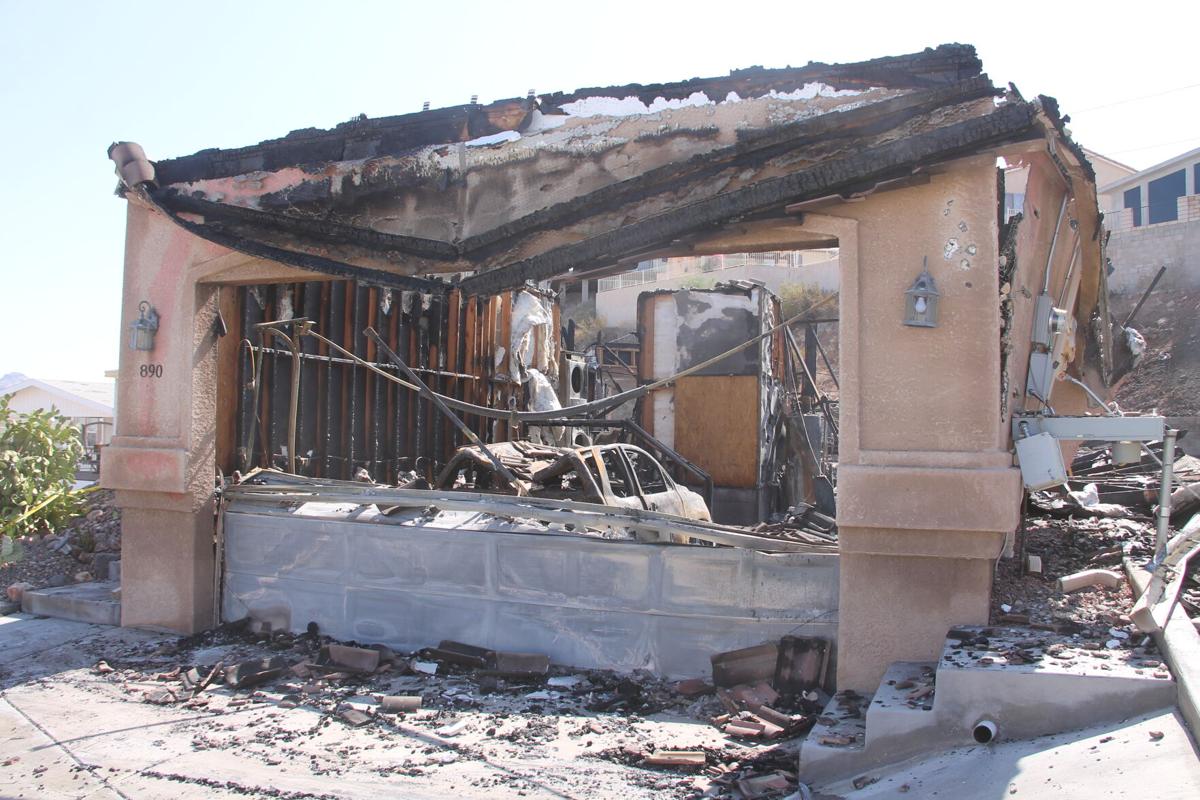 One of the homes destroyed Wednesday night on Linger Drive in the Hillcrest Bay is seen here. 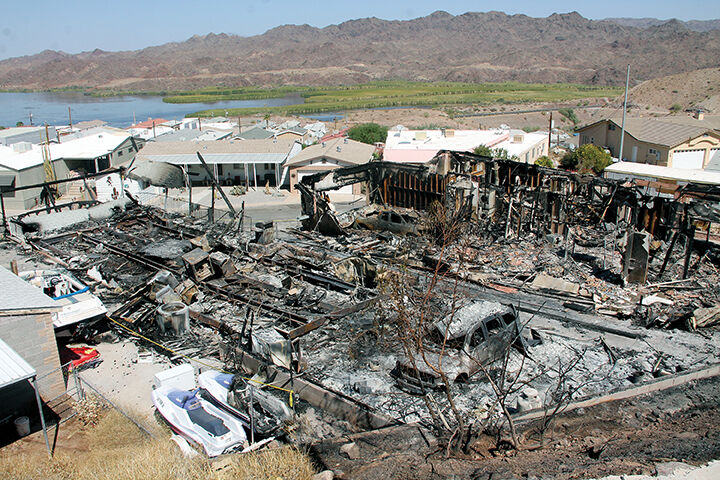 A fire destroyed two homes Wednesday night on Linger Drive in the Hillcrest Bay. The fire started with an accidental explosion that left a man with severe burns.

One of the homes destroyed Wednesday night on Linger Drive in the Hillcrest Bay is seen here.

A fire destroyed two homes Wednesday night on Linger Drive in the Hillcrest Bay. The fire started with an accidental explosion that left a man with severe burns.

A fire that destroyed two homes on Linger Drive in Hillcrest Bay was caused by an accidental explosion that left a man with severe burns, but there were no other injuries reported and residents and firefighters say the damage could have been much worse.

Buckskin Fire Chief Troy Maloney said the man was working on a motor vehicle in the garage of the residence when the gas explosion occurred. He was later flown to the Maricopa Burn Center to receive treatment with burns on his hands and legs.

According to the fire incident report, Buckskin Fire Department was notified of a brush fire at 6:10 p.m. Trudy Warren, who lives across the street from the fire, said she had just gotten home when she heard a loud bang. She went to check her oxygen tanks outside her front door to see if they had exploded, when she saw the house in flames and called the fire department.

When firefighters arrived on scene, the residence where the fire began was 75% involved in fire, and it had already spread to a neighboring house downwind, which was about 25% involved.

“We had only 10 feet between the houses because there are five-foot setbacks,” Maloney said. “So there were flames burning up against the house, which got up into the eves and ignited a propane line also. The crews made a valiant effort and an aggressive interior attack to save that home, but it was so heavily involved that we had a roof collapse and we had to pull everybody out. At that time we focused on protecting the surrounding structures.”

The second home that caught fire was unoccupied at the time. Maloney said it is a vacation home.

Maloney said that Hillcrest Bay, just south of the Bill Williams Bridge, is a non-hydrant community. So Buckskin Fire Department had to fill up at a hydrant in Havasu Springs Resort.

“We had to truck water with our water tenders from the scene, back to the hydrant to fill, and truck it back,” Maloney said. “So there is a time delay.”

Maloney said the fire department used two water tenders and a total of about 45,000 gallons of water to fight the fire.

In addition to limited access to water, Maloney said the tightly packed houses and the wind all made things more difficult.

“We were able to contain it with enough manpower and the correct use of water,” he said. “If we had used all the water we had to put on the original house on fire we wouldn’t not have gotten ahead of it. We basically have to pick a point where we are going to make a stand – it’s a lot like the California wildland fires. As an incident commander we have to make a decision about what we can save, and what we are going to write off in order to save more.”

“We really want to thank our mutual aid partners that all helped us – Parker, Desert Hills, and especially Lake Havasu City,” he said. “We really appreciate the city coming down to help us in the fire district.”

Marianna Benner, who also lives on Linger Drive, said she is on the HOA board and was unaware of the emergency water issues in the community prior to Wednesday.

“I’m on the horn this morning,” she said. “We need to get it figured out today, if not yesterday. I’m an advocate for fire safety and I even didn’t know this was going on. We are going to have to solve this problem immediately.”

Several other residents agreed that access to water for the fire department needs to be a top priority for the neighborhood.

Jeannette Horn said this was the first fire that she can remember since she moved to the neighborhood 18 years ago. Maloney said there have been other smaller fires, but this is certainly the largest and most destructive in the neighborhood in “modern history.”

But all things considered, Horn and Jan Powers both said they thought the firefighters did an incredible job working with what they had to get the fire under control.

“I was impressed by how fast the fire department responded, and they came from all over,” Horn said. “They were on top of it. They did a really good job, considering where we are at in the middle of nowhere.”

Six months without rain in Havasu

Lake Havasu City is in the midst of its second longest drought on record.

White Fire is burning in Cerbat Mountains north of Kingman

KINGMAN — A wildland fire, named the White Fire, is burning in the Cerbat Mountain…