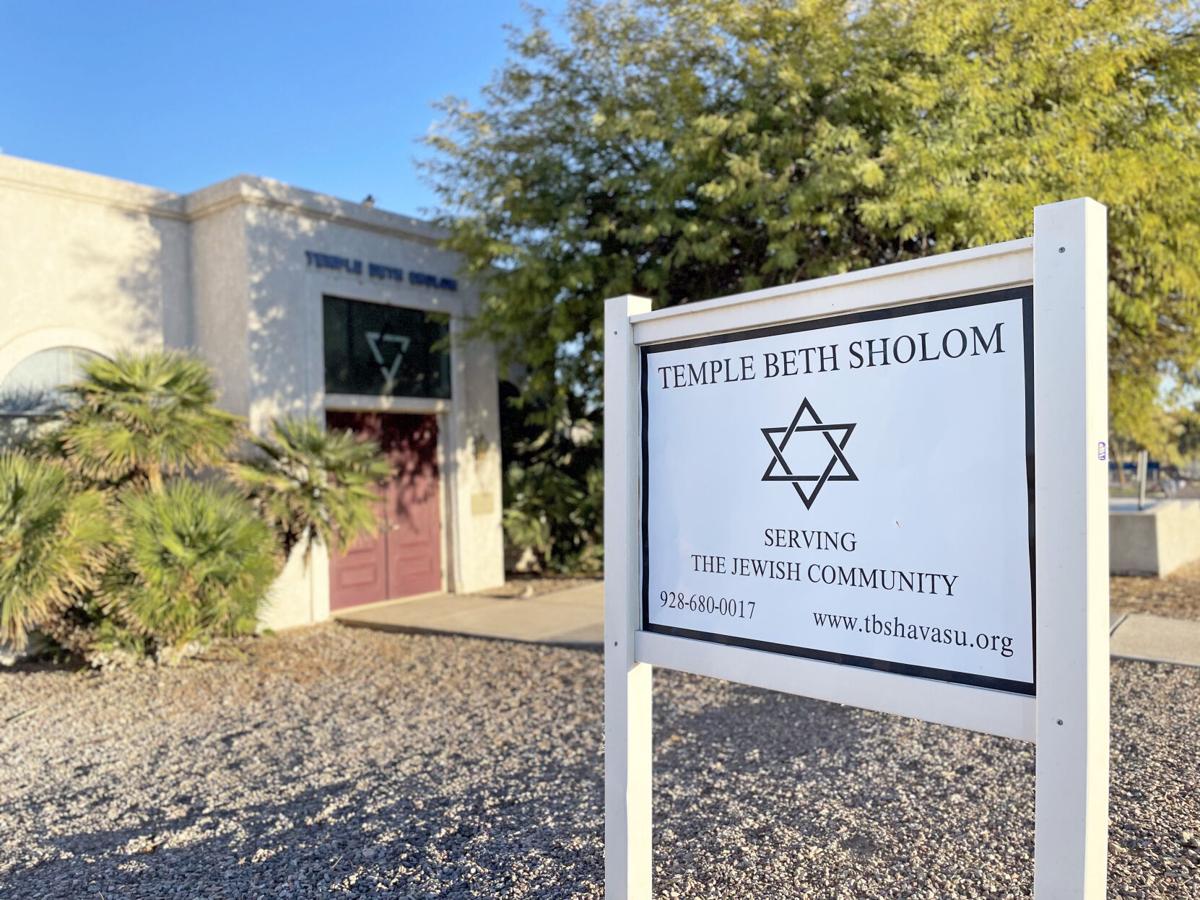 Temple Beth Sholom is the only synagogue in all of Mohave County. 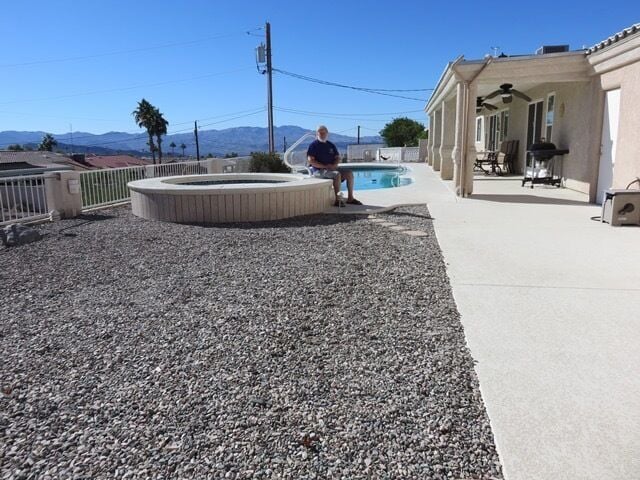 Stan Coffield enjoys the views from his backyard in Lake Havasu City.

EDITOR'S NOTE: This story originally published in the Jewish News of Greater Phoenix.

Stan Coffield and his wife were pretty open-minded when deciding where they would retire. “I wanted someplace that was lower cost of living (than New York) — warm, dry, near a body of water that I could water-ski on — and had some manner of Jewish presence,” Coffield said.

In 2010, they moved into their house in Lake Havasu City. He hasn’t looked back since.

“When my wife and I first moved out here, you would turn a street corner and really be tempted to just pull over to the side of the road and stare; it looks like a picture postcard,” he said. “And you go three blocks, and it’s another picture postcard.”

He and his wife are two of Lake Havasu City’s 60,000 residents and part of the roughly 30 members of the area’s only synagogue: Temple Beth Sholom.

“Given that we’re the only congregation and synagogue within all of Mohave County, we have the full gamut (of members),” he said. “We’ve got people in Havasu, God bless them, who manage to be Orthodox and keep kosher, all the way out to the fringes of Reform.”

Coffield has been president of the congregation for about six years and does his best to provide regular services, Torah study and grow the congregation. Jewish life takes a different shape in rural areas than it does in the city — and often comes with great dedication.

A rabbi travels to Lake Havasu from Los Angeles about once a month to provide a Shabbat service on Friday and a Saturday Torah study. The congregation tries to coordinate his travel with Jewish holidays.

The synagogue strives to have a schedule posted three months in advance to ensure members and those interested have ample time to plan.

“We get congregants from Laughlin, Bullhead City, Blythe, California, Needles — I mean, we’re it.”

Coffield said he’d love to have the rabbi visit more often, “but that’s more a function of finances than anything else.”

In the ‘90s, the congregation bought the synagogue building outright, which Coffield describes as “very utilitarian.” He estimates the sanctuary is about 2,000 square feet, with another 2,000 square feet for the rabbi’s office, two bathrooms, two classrooms and a kitchen.

Two to three dozen congregants paying dues “is enough to get by,” he said. Annual dues are $350 for individuals and $700 for families.

Coffield suggested that there are many more Jews living in the area whom he doesn’t know — or see at synagogue.

“The vast majority of Jews affiliate with a temple to get their children educated,” he said. “That’s a sorry fact. And once you’ve retired, that job’s done.” Lake Havasu is “almost exclusively retirees and service personnel,” Coffield said. According to the U.S. Census Bureau, the median age in the city is 54.2.

As president of the congregation, he gets “sorrowful phone calls” from people he’s never seen at Temple but who are suddenly in need of end-of-life services or spiritual support due to an illness. Coffield does his best to accommodate those requests, “but it’s just hard from so many different perspectives.”

Yuma, about 200 miles Southwest of Phoenix, also has a small but dedicated Jewish community. With a population of nearly 100,000 people, the city’s only synagogue has about 20 family units.

“Those range from people that are single, to couples, to people who have kids,” said Leone Neegan, president of Congregation Beth Hamidbar, which meets in a rented space from a church.

“I am not sure that anyone for whom their Jewish religion is the most important part of their life would move to a place with so few Jewish institutions,” she said. “We don’t know how many, but there are Jews here who don’t belong to the congregation, who just aren’t religious at all.”

Rabbi Stephen J. Einstein has driven from Orange County to Yuma to lead High Holiday services for the past seven years.

“The rest of the time, he gave us a class in doing lay-led services, so we take turns leading Shabbat services, and we pool our knowledge,” she said.

Members meet for services twice a month most of the year — in the summer, that’s halved.

Some of the congregants also meet in a weekly Torah study group.

“We just read and talk among ourselves,” she said.

Neegan was born and raised in Phoenix but moved to Yuma in 1975 after graduating from the University of Arizona with a degree in Library Science and taking a job on a whim.

She went to Yuma to visit a friend just before graduating. Upon Neegan’s arrival, her friend said, “I hope you brought some clothes that you could wear to an interview.” A librarian position in the public library had suddenly become available.

She ended up getting a library job, but didn’t think she’d stay in Yuma long. “I couldn’t imagine anyone living here. It was just, to me, a very small, dusty town.”

For a few months, she thought she was the only Jew in town. But one day, she saw an article in the local newspaper about High Holiday services. “I went to services, and found that there was a small Jewish community here, and the people were very welcoming,” she said.

At the time, the congregation wasn’t affiliated with any branch of Judaism, since the people who attended had a variety of Jewish backgrounds and observance. Eventually, though, it affiliated with the Union for Reform Judaism.

Neegan found herself getting more involved and active in the Jewish and Greater Yuma community.

“If I had remained in either Phoenix or Tucson, or some other large city with a larger population, I might not have become as involved with either the religion or the congregation, as I ended up being,” she said.

Neegan’s fellow congregants have become “a giant, extended family,” she said. “It’s like being on an island with people. If you get angry, there isn’t another synagogue to go to. You have to work it out somehow.”

Rabbi Nina Perlmutter said, in many cases, the further a Jewish person lives from Jewish life the more dedicated they are to seek it out.

Perlmutter is the rabbi emerita of Congregation Lev Shalom in Flagstaff and the designated Jewish contact for the Grand Canyon South Rim.

Many Jews who live in the Grand Canyon, or other remote and rural areas around Arizona moved for the beauty of the landscape, she said, and Jewish life wasn’t necessarily a priority.

“But then they often find that they miss having Jewish connections,” she said. “I know people who have commuted a long time, like the Grand Canyon folks, to Flagstaff. That’s not easy. You gotta really want to do it.”

People who want to stay both Jewish and rural, might have to learn more so they can lead their own services, and other rituals.

Perlmutter went through all of this firsthand, having moved from New York to Tempe in 1970 for graduate school. “I thought I’d stay two years,” she said. But she “fell in love with the land”: Arizona’s vistas, desert, mountains and ecological diversity. It took her a while to connect with her “Jewishnes.” She became a rabbi in 2009.

She found a way to combine her passion for Judaism and the environment soon after. The license plate on Perlmutter’s Prius reads “ECO RABBI.” Today she officiates weddings on the North Rim, and b’nai mitzvah on the South Rim.

“Doing a morning service, watching the sunrise at the North Rim is my favorite thing.”

By the end of the first day of the 2022 State Legislative Session, Republicans hav…

A potential challenger has signaled their interest in running for Lake Havasu City Mayor.