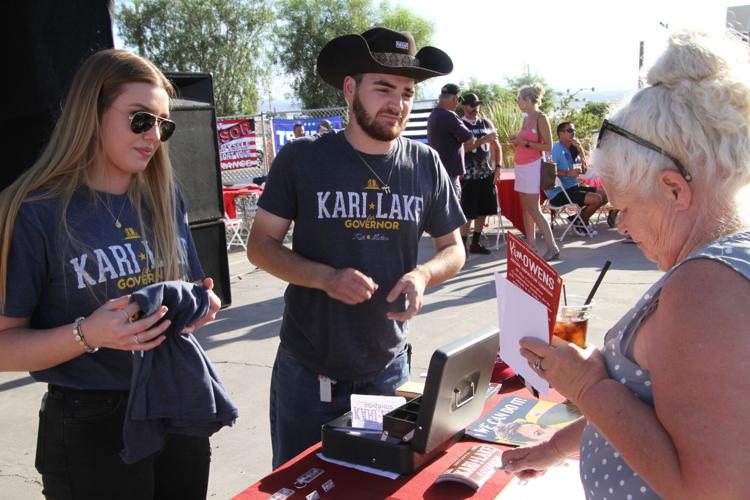 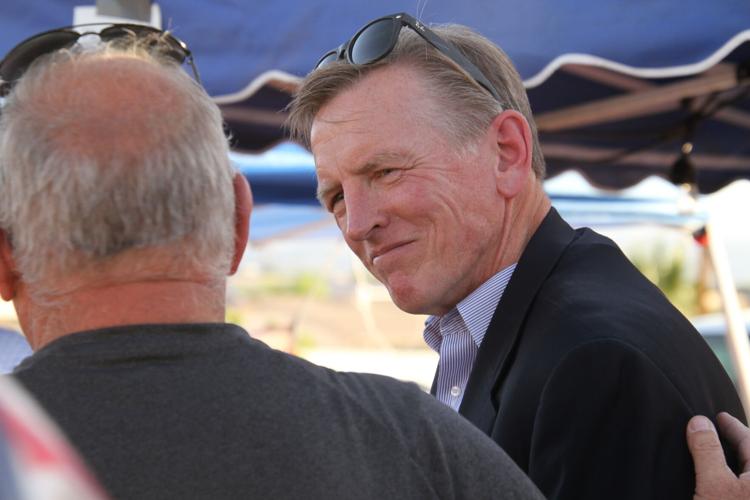 Hundreds of Mohave County conservatives gathered this week at a Lake Havasu City business to celebrate recent victories in this year’s Republican Primary Election, and to show their support for candidates who will be placed on the ballot this August.

Sheehy this year will be opposed on the ballot by local nonprofit founder Frankie Lyons, of Veterans United AZ. Lyons was glad to see Republicans showing their interest in the democratic process as they gathered to meet their candidates on Wednesday. And according to Lyons, recent frustration with the Biden Administration has enhanced conservatives’ fervor this year.

“Our administration is not doing what the people need for it to do,” Lyons said. “It’s great to be able to communicate with the voters one-on-one. It’s very important that the people here have freedom of speech, or to express their believes without being punished for it.”

Gosar: Candidates’ real work lies ahead of them

Gosar greeted Mohave County residents in one-on-one conversations at the event, and saw no small amount of support from local conservatives. The congressman has represented Havasu and Arizona’s 4th congressional district since 2013, and has long been a rallying force for Mohave County Republicans. He is now running for Arizona’s 9th congressional district, which was created after the 2020 census.

“It’s great to be able to hear from citizens, and have a chance to talk with them,” Gosar said Wednesday. “Republicans have done a great job in turning over congress, but they haven’t been held accountable. People need to know what they’re doing it for, how they’re going to do it, and when they’re going to deliver.”

According to Gosar, the purpose of Wednesday’s gathering was to answer those questions, and consolidate conservative political efforts throughout the state.

“We’re going to have to work with our governors, our secretaries of state, and our elected legislators to get this country back on track for the people,” Gosar said.

Ward: Republicans are ‘fed up’

Arizona GOP Chairwoman Kelli Ward appeared at Wednesday’s event to show her support for all Republican candidates this year, and to hear concerns from local constituents.

“A lot of people have asked me (to run for governor), but I don’t want to be governor,” Ward said. “I’m here to help all Republicans … and any Republican on the ballot is much better than the Democratic candidates who are running.”

“People are fed up,” Ward said. “They saw with their own eyes that there was funny business in the last election. Citizens want to elect people who will bring integrity back to the voting process … People want economic freedom. Gas is about $5 per gallon at the pump. The working class cannot survive under the liberal administration’s foolishness.”

Wow, a whole bunch of nasty attacks on here today! I will not be voting for Paul Gosar, Biden, and Ward needs to go. Pretty simple stuff. No sense in all the hateful rhetoric.

Sorry about the cape

Fortunately Gosar and Ward will be gone soon, we’ll have to wait until 2024 to see about Biden.

Next month the Jan 6th committee congressional hearings will begin. I’m sure Paul Gosar and Kelly Ward will get a mention along with other fine Arizona insurrectionists like Biggs and Finchem. Can’t wait!

BIGOTS, THEY ARE WORST THAN THAT, MARGERIE TAYLOR AND MATT AND SHAMUCK GOSAR ARE FOOLS ON A HILL, ONLY STUPID PEOPLE WOULD VOTE FOR SCUMB OF THE EARTH

Your caps lock is on.

You've been reported. Ready the rules.

A rather “antisemitic” comment, what happened to “no racism” as in rule #4 at the bottom of this page. Looks like the words Republican and Patriot have “triggered”some of the local “snowflake’s”they’re out in force and very angry! The only one missing is [batman] calling everyone fascists and digging up long dead NAZIS? [thumbup][huh][tongue][smile][wink] Deaton

He hangs with Hateful Racists.

That Gosar Idiot makes the Republican Party look like Fools.. Get rid of that Shamuck once and for all.

Biden calls for 3-month suspension of gas and diesel taxes

President Joe Biden is calling on Congress to suspend federal gasoline and diesel taxes for three months — an election-year move meant to ease financial pressures. But it's not clear Biden has the votes to suspend the taxes. Many lawmakers in his own party have expressed reservations. Biden says he knows the move wouldn't reduce “all the pain but it will be a big help.” If the gas tax savings were fully passed along to consumers, people would save roughly 3.6% at the pump. Prices average about $5 a gallon nationwide. Biden also wants states to suspend their own gas taxes or provide similar relief.