The announcement story of the first general membership meeting of the Chamber of Commerce in 1971 is seen here. 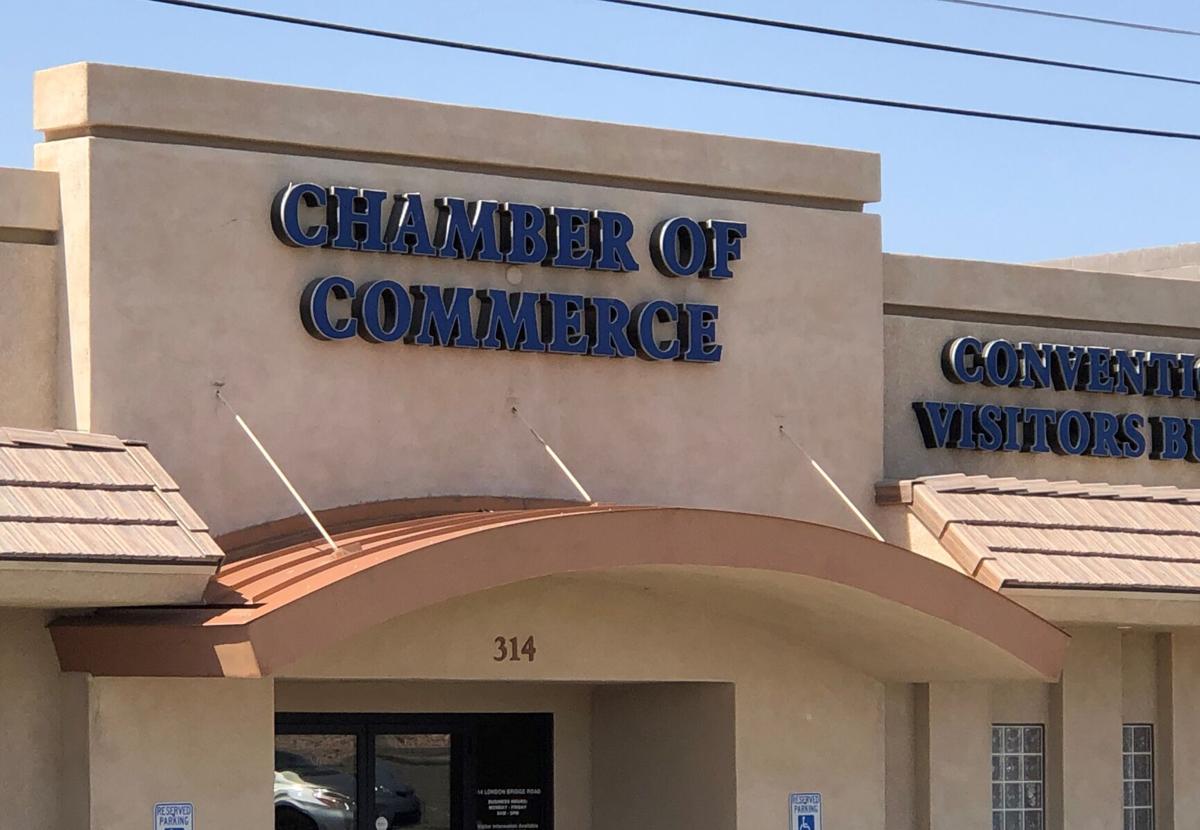 The current home of the Lake Havasu Area Chamber of Commerce.

The announcement story of the first general membership meeting of the Chamber of Commerce in 1971 is seen here.

The current home of the Lake Havasu Area Chamber of Commerce.

The London Bridge isn’t the only thing that is turning 50 this year in Lake Havasu City.

This week the Lake Havasu Area Chamber of Commerce is celebrating its 50th anniversary with its annual meeting this Friday. More than 200 Chamber members will gather at the Realtors Convention Center where the main event of the night will be the annual awards for businesses and volunteers.

Havasu’s Chamber got its start on June 19, 1970, during the first meeting of its temporary board of directors. At that meeting Havasu originals like Chas. Hershenson, Lester R. Galst and Mary Peters discussed the drafting of chamber by-laws, the collection of members dues and the need to find an office space.

At that time the Chamber represented 162 charter members, including companies still in business today such as Campbell D.D Construction, Farmers Insurance Group and the Lake Havasu Marina.

The new organization was an important place for Havasu’s early business owners to network and grow in the fledgling community. Later, the Chamber embraced its role as an advocate for the business community in the political world.

The Chamber started dipping its toes into the political world in the 1980s under the leadership of John Parrott.

“It was important to speak up for businesses if a law was going to be good or bad for their operation,” Parrott said.

One issue that Parrott remembers the chamber helped resolve involved confusion over how to handle sales tax on out-of-state purchases. A law passed by the state conflicted with a Havasu city law regarding out of state sales tax and the city wanted some local chamber members to pay back taxes on out state sales.

“I think it was a very large disagreement because it represented a lot of money to a small number of our members,” Parrott said. “Eventually the city agreed that the companies didn’t have malicious intent not paying the tax, there was just confusion.

Parrott also oversaw the organization’s transition to a full-service operation that offered assistance to businesses and organized its own community events.

That’s still the mission of the Chamber today, now under the tutelage of President and CEO Lisa Krueger. She says the Chamber serves as a hub of support for local businesses, providing referral services and connection opportunities.

The Chamber continues its work in the political arena. It also holds monthly mixers that allow business owners and professionals to meet and socialize to build local networking connections.

It also organizes and hosts several popular annual events, including the Winterfest street fair in February and the Desert Bash, an off-road gathering in Standard Wash, held each December.

“I think my favorite memories are mostly the different annual celebrations like we are doing on Friday night because for the past few years we have themed them,” Krueger said. “... I think it is just around those events where we kind of get to get out our regular character and celebrate all the things we do.”

However all these events had to take a back seat in 2020 thanks to the covid-19 pandemic. It is only in the past couple of months that the Chamber has restarted its monthly mixer events and Friday’s 50th Anniversary celebration is its first major event in over a year.

While the Havasu economy didn’t get hit as hard as other economies around the world the Chamber still relied on the support of their members, some of whom threw in a little extra with their yearly dues to help support the Chamber.

However, other than working from home more than usual, it was business as usual for the Chamber during 2020.

“We really didn’t take a day off,” Krueger said. “...our staff did work from home but we did find ourselves coming back to the office on a regular basis...we would come back in to run reports or to get specific information or to provide people with one on one help.”

While driving through the desert on the way out of town, it’s common for a passeng…

Arizona AG fires back at feds on election audit