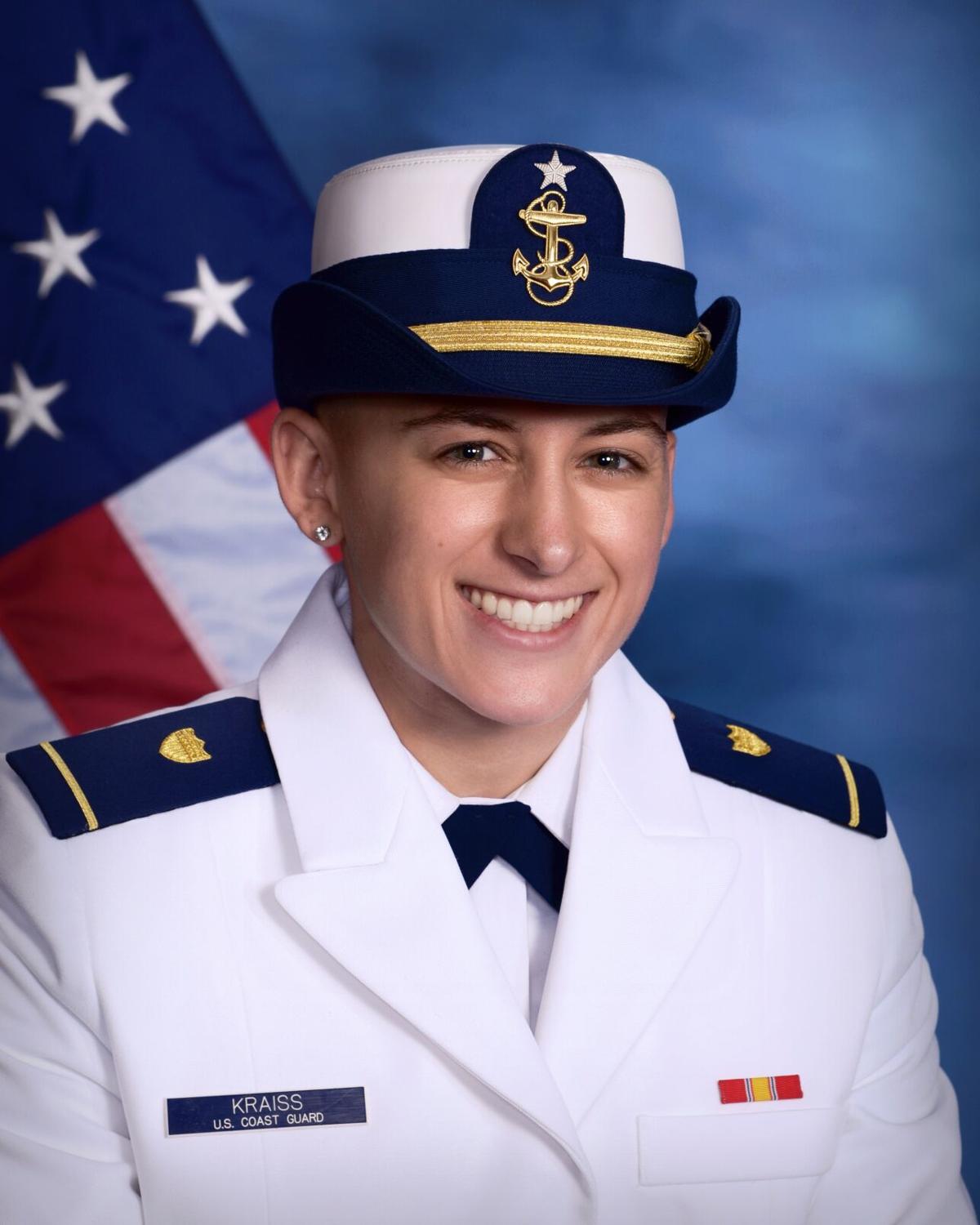 Charlee Kraiss, 21, will graduate from the Coast Guard Academy this month. 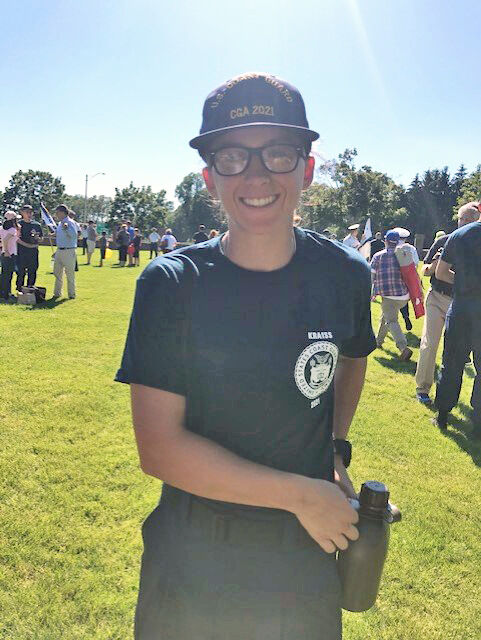 Charlee Kraiss poses for a photo on her first day of bootcamp at the U.S. Coast Guard Academy.

Charlee Kraiss, 21, will graduate from the Coast Guard Academy this month.

Charlee Kraiss poses for a photo on her first day of bootcamp at the U.S. Coast Guard Academy.

On June 26, 2017, the Kraiss family watched their daughter Charlee take an oath to protect and defend America before heading off to bootcamp. Now, Charlee is preparing to graduate from the U.S. Coast Guard Academy at the top of her class.

Charlee is 21 years old. She was born in Valencia, California and moved to Lake Havasu City when she was six years old. Her parents describe her as “an extremely intelligent, bright, confident, passionate young woman with a fierce drive academically and physically.”

For Charlee, applying to the academy was a no-brainer.

“I honestly thought the opportunities afforded were too valuable to pass up,” she said. “The summer experiences in the fleet coupled with graduating from a military service academy, debt free, with a well-paying guaranteed job at the age of 21 — all while serving my country — was everything I could have wanted.”

Her father’s prior enlistment in the Marine Corps always inspired her to join the military in some capacity, and the smaller, “family-oriented” feel of the Coast Guard was “incredibly appealing,” she said.

“All it took was one tour and an overnight stay at the Coast Guard Academy for me to know I would immediately accept my appointment if offered,” she said.

And accepted, she was. Charlee was one of the first in her class to receive the good news, during her senior year at Lake Havasu High School in October 2016.

“When I received the phone call, I distinctly remember holding myself together long enough to make it through the phone call, only to break down immediately after hanging up,” Charlee said. “I was so sure about accepting my appointment that I didn’t apply for any other universities after getting accepted.”

Her parents remember that first day of bootcamp well.

“We watched Charlee place her one bag on the ground, stand on that ‘X’ and leave that gymnasium, and six hours later we were outside watching the 2021 Class take the Oath to protect and defend their country,” her mom, Anna Kraiss, said. “We had 10 minutes after to say our goodbyes. The first thing she said to us when she found us was, ‘Mom, Dad, this is so hard. I don’t know if I can do this.’ We told her to take it one meal at a time and you’ll get through it.”

Only four weeks later, they returned to the academy to watch Charlee give a speech. She was chosen as “Super Swab” for her entire class.

“‘Super Swab’ was a title given to the highest performing recruit during bootcamp,” Charlee said. “My memory from bootcamp as a whole is fairly foggy, but that day is still distinctly clear.”

The chief of her company pulled her out during drill practice and sent her to his office. Unaware of why she was singled out, she became “very worried.”

She was then informed she’d been selected as the Class of 2021’s “Super Swab,” and Charlee was granted a phone call with her mom.

“That is something I couldn’t have been more grateful for,” Charlee said. “My parents flew up last minute for the ceremony, just to spend six hours of liberty with me, and that is something I will always cherish. It is just what I needed to make it through the remaining of those seven weeks of basic training.”

Charlee was presented with her fair share of challenges, even after bootcamp.

“The academy tends to make you feel isolated at times, especially as an incoming 4/c cadet (freshman),” she said. “With the high stress environment, overloaded academic schedule, athletics, and military obligations, it separates you from the outside world. Additionally, the atmosphere is highly competitive, as your class rank directly affects what your first tour will be. It is a constant training environment, and the barracks are never really your ‘home.’”

It also forced her to mature quickly and stay on top of things. With high-ranking military officers serving as her professors and mentors — with whom she interacted with nearly every single day for four years — and a rigorous schedule, she began to “develop a greater sense of self and professional composure” and her own “autonomy” in order to avoid falling behind in her training and studies.

Clearly, her dedication and drive paid off. On May 19, Charlee will graduate eighth in her class of almost 300 members. When she began, she didn’t expect top even break the top 100.

“I wholeheartedly was prepared to adopt the ‘C’s gets Commissions’ mindset, and just cruise through to graduation, because I was aware of the academic statistics of service academies,” Charlee said. “At the Coast Guard Academy, I averaged 18 credits each semester throughout my time as a cadet, on top of military and athletic obligations. However, after my first year, I entered my major, Operations Research and Computer Analysis, and completely fell in love with learning again.”

Her passion for mathematics and computer science motivated her to do the best she could, and because she truly enjoyed it, she succeeded.

“What kept me focused was honestly taking each day, each course, and each assignment one at a time in order to prevent myself from becoming too overwhelmed,” Charlee said. “I have become a big proponent of ‘sticky note objective lists’ and the Pomodoro Timer Method for studying.”

That passion was sparked by Mrs. Christie Locatis at LHHS, who taught Charlee in Algebra, College Trigonometry, and College Algebra. Locatis suddenly passed away in July 2020, and her loss was grieved by hundreds of students and fellow staff members.

“I more than likely never would have pursued the course of studies I did without her, and I will forever cherish the time I had with her in class growing up,” Charlee said. “She shaped me into the academic I am today. I will miss her always.”

On May 19, Charlee’s parents plan on being the loudest ones there, and Charlee couldn’t have made it graduation day without them.

To her family, Charlee said, “Thank you for always believing in me, even when I did not believe in myself. I am counting down the days until you can put on my Ensign shoulder boards and help me finally commission as an officer in the United States Coast Guard.”

After she’s done at the academy, Charlee will be moving down to Miami, Florida, where she’s been assigned as a Marine Inspector at Sector Miami Beach.

“This was my first-choice billet, and the career path I wanted to pursue in the Coast Guard,” she said. “I am very excited as I will be stationed at a land-based unit, which will allow me to dedicate time to my fiancé, and to my hobbies, like CrossFit.”

She met her fiancé while at the academy. One of Charlee’s most cherished memories was having the opportunity to be her first salute as a commissioned officer in the Coast Guard.

Her next goal is to pursue her Masters and PhD in a field of Mathematics or Computer Science at Harvard University.

“We are and always have been extremely proud of all her accomplishments, and there have been quite a few,” Anna said. “From getting her black belt in Taekwondo, to being on principal’s honor roll from elementary to high school, playing softball for the Coast Guard, and her new passion Crossfit where she competed with a team of four in Miami at the Wodapalooza where they came in 2nd place out of 120 teams, and of course, her biggest accomplishment to date — graduating in the top 10 of her 2021 class at the academy. We feel Charlee can accomplish anything that comes her way.”

Good job! Mom you did a great job taking her to all the softball practice and games hundreds of miles away. Charlee keep the smile.

Community Colleges in Arizona one step away from 4-year degrees

New funding to curb wildfires pushed in Congress, as another fire season looms

WASHINGTON — As wildfires across the United States grow in size, intensity and dur…