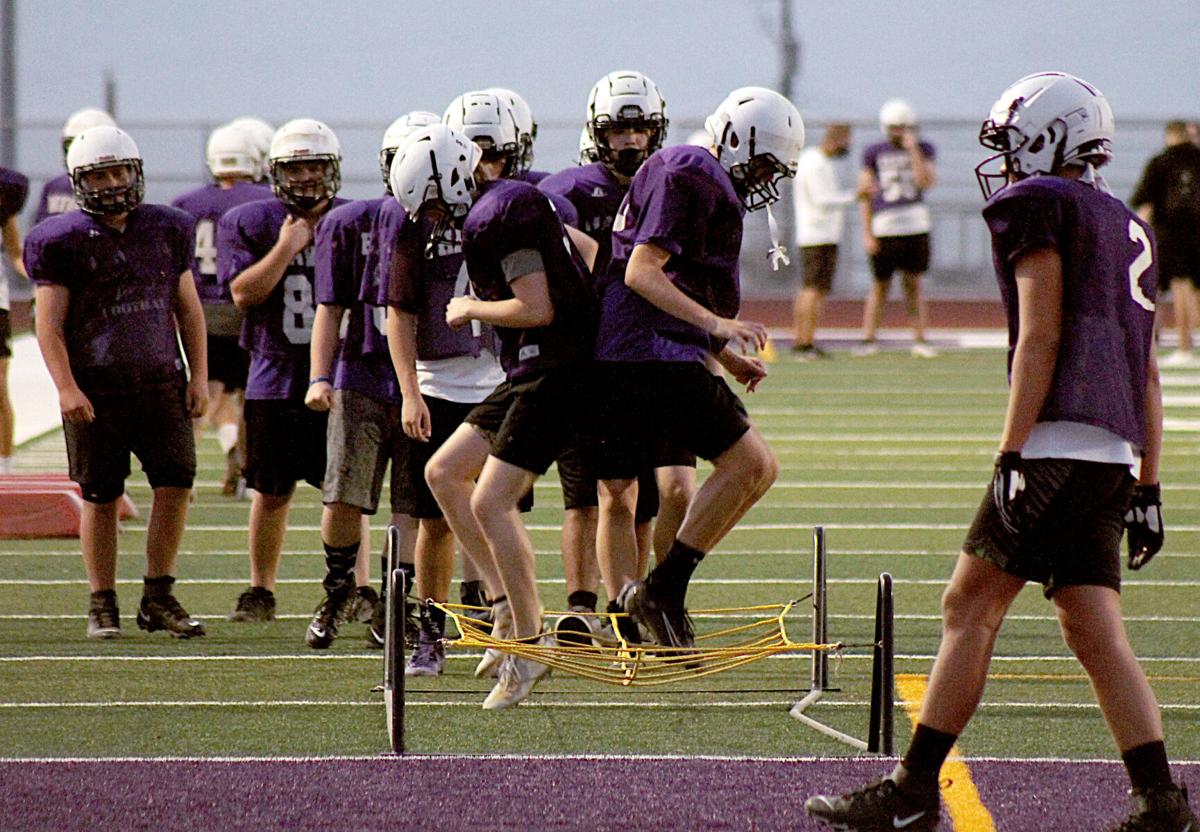 The Lake Havasu football team goes through some agility drills during practice on Monday. 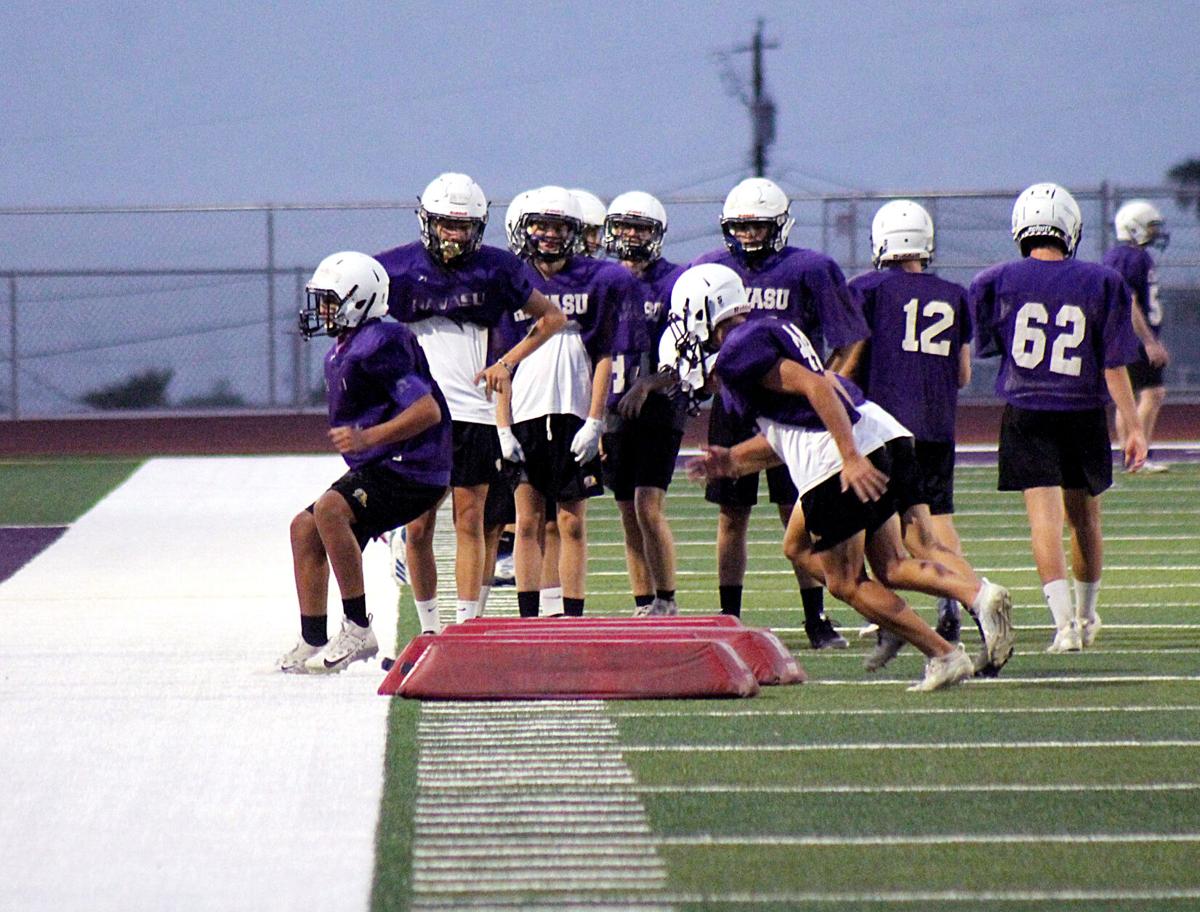 The Lake Havasu football team goes through some agility drills during practice on Monday.

Most fall sports at Lake Havasu High School now have the green light to go forward, but the football team will need to wait for some better community metrics before they can take the field on Fridays.

The Arizona Interscholastic Association has more or less finalized schedules for the fall sports seasons and sport-specific covid-19 guidelines are in place for all practices and competitions. Now that Mohave County has reached the “moderate transmission” metrics from the Arizona Department of Health Services all non-contact sports can proceed under the new guidelines. Contact sports can practice with some restrictions in the moderate phase, but games will not be allowed until the county reaches “minimal transmission.”

The only contact sport during the fall is football. Although AIA has scheduled football as the last sport to get going with games starting in early October, 13 of the 15 counties in the state still have work to do before they will be able to kickoff.

The Knights first football game is scheduled for Oct. 2, at home against Glendale.

“At this time only two counties, which equals three schools, qualify to play their first game,” said Havasu Athletic Director Dustin Zampogna. “They are the only ones who meet the metrics that the AIA has put on football at this time. So the schedule is finalized, but whether we actually get to play a game come Oct. 2 is still up in the air. If we don’t meet those guidelines then our hands are somewhat tied.”

ADHS has identified three metrics to determine how widespread covid is in each county. To be considered minimal transmission the number of cases per 100,000 population must be below 10, the percent positivity rate of tests must be below 5%, and hospital visits for covid-like illness in the region must be below 5%.

According to the numbers, Mohave County has met the minimal spread threshold in hospital visits since Aug. 2, but numbers released last week show Mohave County with 41 cases per 100,000 population and an 8.1% positivity rate. The state updates the numbers every Thursday. If Mohave County reaches the metrics in time to play on Oct. 2 the Knights would still need Maricopa County to achieve minimal spread in order for Glendale to make the trip to Havasu. Maricopa is also meeting the threshold in hospital visits but as of last week had 51 cases per 100,000 population and a positivity rate of 5.2%.

“With everything that we do with football and other sports, you can never air on the side of caution enough,” said head coach Carl Thompson said. “It is the guidelines that are recommended and we will continue to follow them and take the direction of our athletic department and school district. We will work around the parameters that we are given to make sure that we meet them and are keeping kids as safe as possible.”

While in moderate transmission, the football team has still been able to practice with some modifications.

“We are still not allowed person-to-person contact, so we are using bags, hand shields and different things like that in drills to simulate what would be contact,” Thompson said. “That is the only big change so far.”

Thompson said that the team purchased a tackle wheel and other practice equipment a couple years ago that is paying big dividends during the pandemic.

On Monday the team was still in helmets and shoulder pads, but today will be the first day for a practice with full pads. Thompson said as the week goes on the team’s preseason practice schedule will increasingly diverge from normal as long as the county remains in the moderate level.

“As we start getting further into this week when we are in our full padded practice that will be the first time we will see any major change,” Thompson said. “We would usually be able to do a live session or scenarios where we are making physical contact. At the end of the week we would be wrapping up players but you just don’t take them to the ground. All of those things are restricted now.”

Currently only high schools in La Paz and Greenlee are cleared to start playing football games, though several other counties are getting close.

While contact sports have additional restrictions, all the other fall sports at Lake Havasu are able to practice and compete as things currently stand. The Knights boys and girls golf teams have already been competing for a couple weeks and the cross country teams are scheduled for their first competition on Wednesday.

“That tiered start is starting to roll into full effect and we are getting into the thick of things here with sports,” Zampogna said. “Hopefully we can get football started as close to on time as possible.”

Zampogna said the athletic department and coaches have been going through all the additional guidelines that were released by the AIA on Sept. 4 and have worked out how to meet all the guidelines.

“Other sports are moving along great,” he said. “Our coaches are doing a great job of ensuring social distancing, wearing masks, and all the guidelines that the AIA and our school district have put into place.”

Zampogna said the school district is still deciding how to handle spectators at sporting events this year and no specifics have been decided yet.

“What I can say is spectators are going to be able to attend, but it is going to be in a limited fashion,” he said. “It isn’t going to be sports like usual - much like a lot of things right now.”

The 2020 Census will come to a close in less than a week, and Lake Havasu City is …