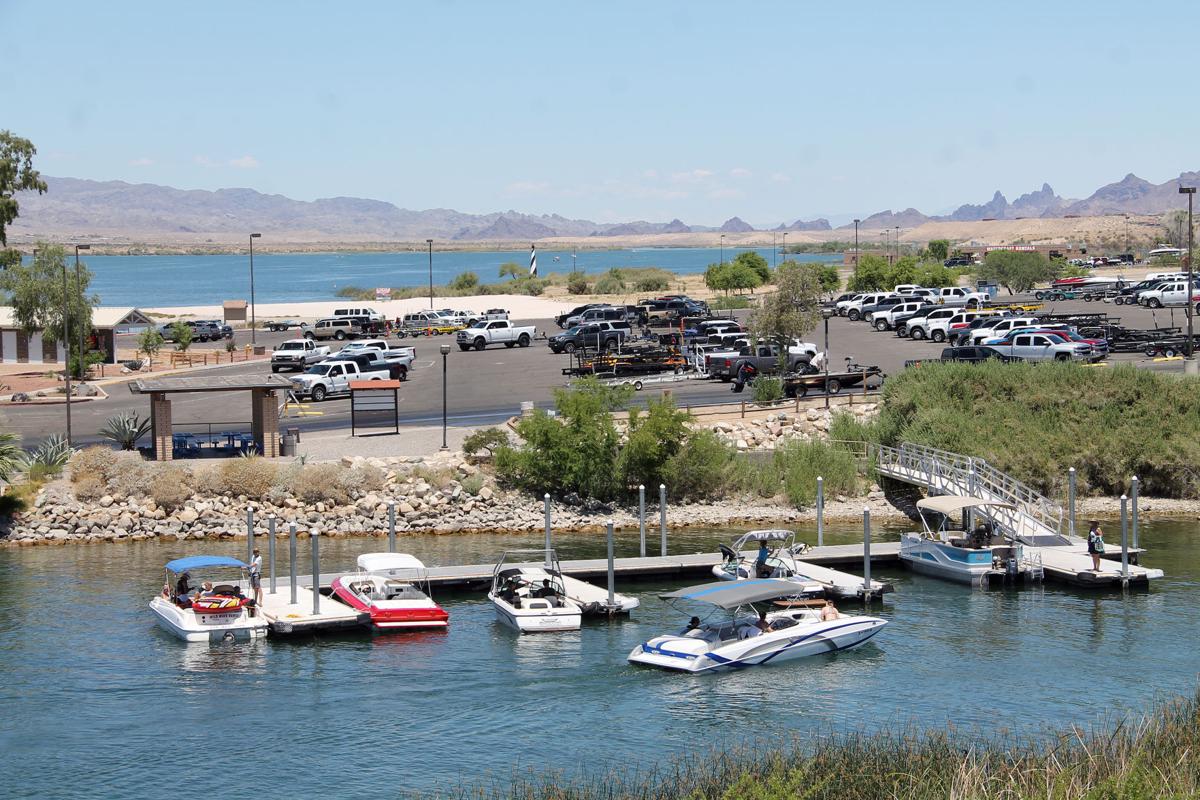 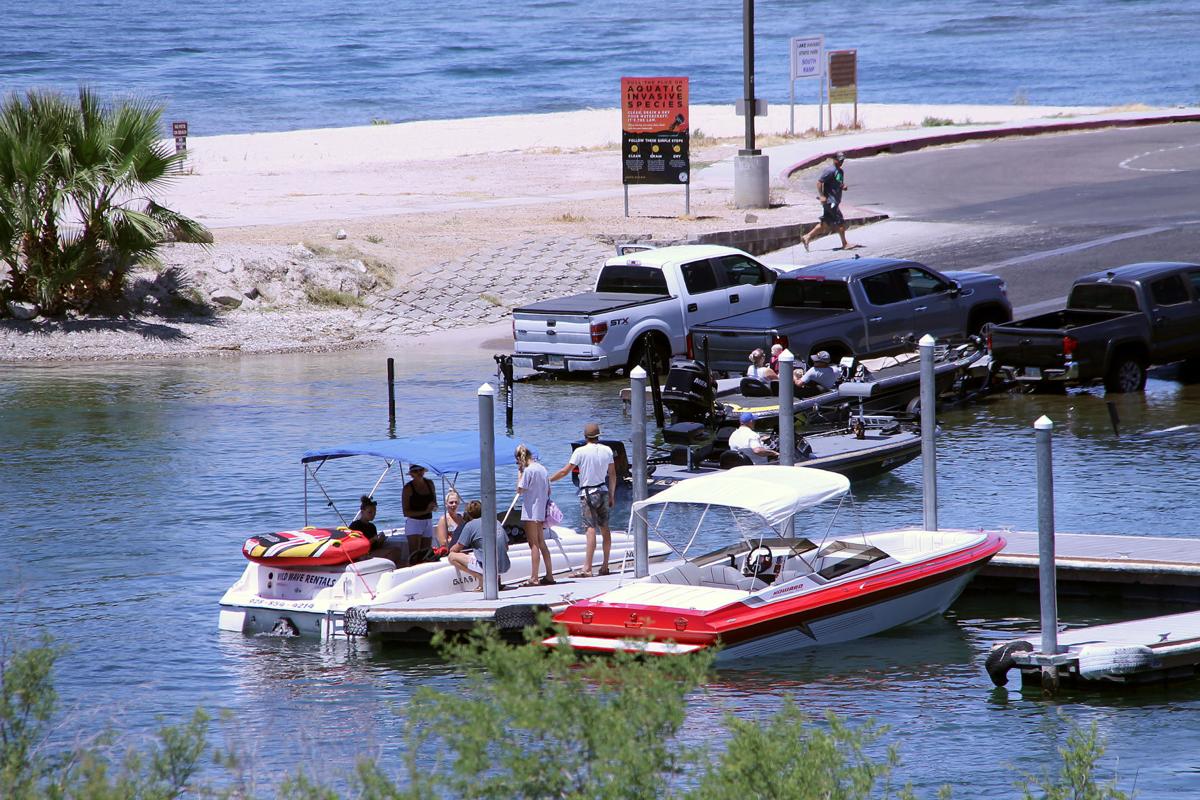 Boaters load up a vessel near the launch ramps at Lake Havasu State Park. The lake is expected to see a surge of visitors for the Memorial Day weekend.

Boaters load up a vessel near the launch ramps at Lake Havasu State Park. The lake is expected to see a surge of visitors for the Memorial Day weekend.

If you’re hoping to head out to Lake Havasu State Park during Memorial Day weekend your best bet is to get there early, and don’t forget to pack plenty of patience and a positive attitude.

That is Lake Havasu State Park Manager Daniel Roddy’s advice to potential guests on a weekend that traditionally brings the largest crowds to Lake Havasu City but this year meets reduced capacity as a precaution during the coronavirus pandemic.

“Memorial Day has always been beyond capacity,” Roddy said. “Now our capacity is lower, and we are still expecting that beyond capacity crowd. It is going to be a delicate balance to try to offer what we do and do it safely. We are going to do our best to keep everybody happy over the weekend, but there are going to be people that are not able to access the park at the time that they hope to access the park.”

Arizona State Parks Public Information Officer Michelle Thompson said Lake Havasu State Park saw 13,000 visitors, including campers and day use, over the three-day Memorial Day weekend in 2019. If recent trends continue, even more people could be looking to get into the park this year. Thompson said the number of visitors to Lake Havasu State Park on May 9 and 10 was a 73 percent increase over 2019 while last weekend saw a 105 percent increase in visitors.

“With the Stay Home, Stay Healthy and Stay Connected order expired, we are anticipating that many people will want to get out and enjoy the parks over this holiday weekend,” Thompson said in an email. “Because visitation has been increasing over the past several weekends, we do expect to see crowds during Memorial Day.”

But accommodating crowds during social distancing will be tricky, and will require restrictions that have never been in place during Havasu’s busiest weekend.

In the past when the park has gotten busy, Roddy said the park has employed a launch and leave program that allows guests to pay the fee and launch their boat, but they must then leave their vehicle elsewhere. Roddy said they have had more than 200 boats take advantage of that option at any given time, but it will not be on the table this year due to the health crisis.

“Right there are 200 guests that we welcomed in last Memorial Day weekend that we don’t have room at the inn for,” Roddy said.

The park has also restricted the amount of available parking during the pandemic. Roddy said the largest lot still closed is about 13 acres – enough room to park about 140 vehicles and boat trailers.

Thompson said each state park’s capacity is determined by the park manager and park staff based on several factors including how many people are camping, how many people are coming in per vehicle, and the current conditions in the park. Roddy said Lake Havasu State Park also keeps in contact with patrols on the lake and takes boat traffic and accidents into consideration as well.

But once the park makes the determination to temporarily close access, Roddy said it will likely stay closed for at least an hour or two.

“Because it is such a vast property we can’t really adhere to one-in-one-out. So when that kicks in, it will be restricted for a duration of time,” Roddy said. “When there is enough capacity available then it will reopen. We don’t want to be in a spot where we are open for 10 minutes and then have to close again. We want to be able to say that when we open we are not going to close again during that day, though we would do it if we had to. That has worked well for us over the past few weeks.”

Prior to coronavirus, Lake Havasu State Park had only had to temporarily close its entrance once – on July 5, 2019. Since the start of the health crisis the parks capacity has been reduced and Roddy said the park has instituted about eight to 10 temporary closures as a result.

But the state park has also been slowly increasing its capacity over the course of the last month. Roddy noted that about 40 parking spaces in lot two that were closed last week have been reopened, and the park plans to reopen a dirt lot on the south side of the park in time for the weekend.

“We will be able to accommodate more people this weekend than we have at any point over the last several months,” Roddy said. “The question is at what point does the demand outpace the availability? We anticipate that coming.”

Roddy said every time the park has been temporarily closed staff has been able to reopen it again that day, but there are no guarantees on how long that will take.

“What we have experienced is on a Friday we will see more people coming and going. On a Saturday people aren’t leaving as much – they are here all day,” Roddy said. “So that restriction might be in place longer on a Saturday than you would see on a Friday. I believe for Memorial Day weekend most people are planning to be out for the day. So if we don’t see that pressure release of people exiting, that restriction is going to last longer.”

Roddy said boaters who have experienced previous temporary closures at the park during the pandemic should note that Memorial Day will be handled a little differently. Boaters who enter the park early will not be guaranteed reentry if they leave the park.

“We are trying to do the best we can to accommodate as many people as we can,” Roddy said. “Unfortunately because of the pandemic we have limits that have never been in place before. We are asking for people’s patience and smiles, because that is what we are asking of our staff too. Be patient, smile, and do the best you can.”

Hopefully the State is sending down additional sworn Park Rangers to deal with the insanity happening there this weekend!

I seriously hope that everyone has a safe and fun weekend. Special prayers for our first responders and law enforcement individuals!

Going to be a real sh#t show this weekend ![tongue]

More than a year after starting the process, the Lake Havasu City Council got its …

Arizona Gov. Doug Ducey has announced an 8 p.m. curfew throughout the state for th…