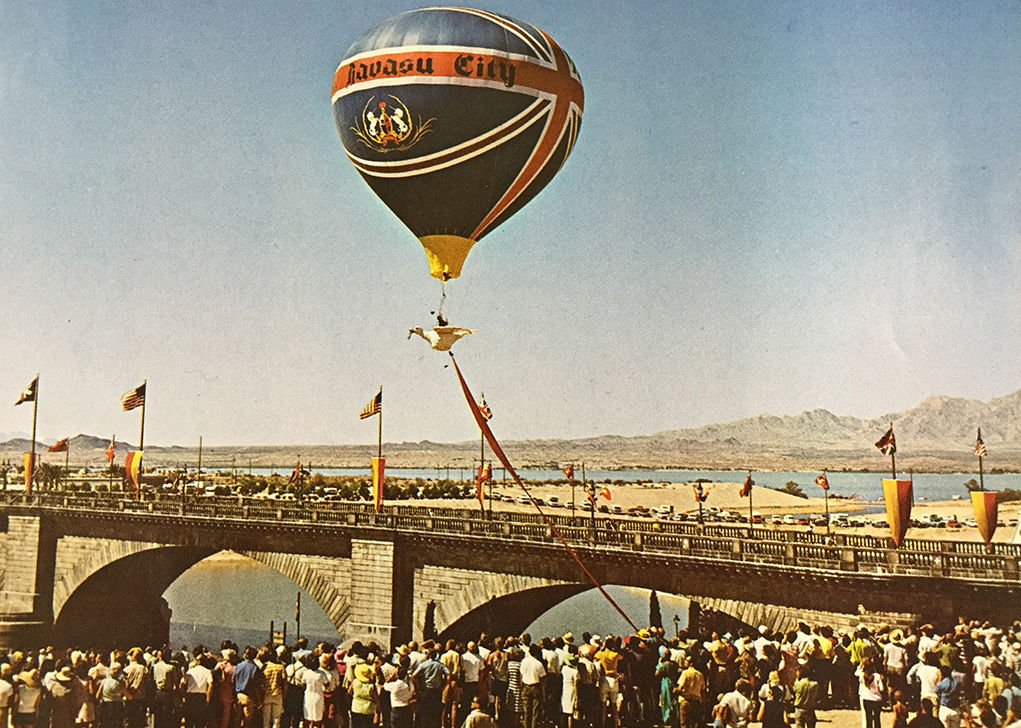 The hot air balloon commissioned by Robert McCulloch rises over the London Bridge during its 1971 dedication. Balloon owner Dean Baker says the balloon will make a reappearance at the bridge during the 50th anniversary activities on Saturday. 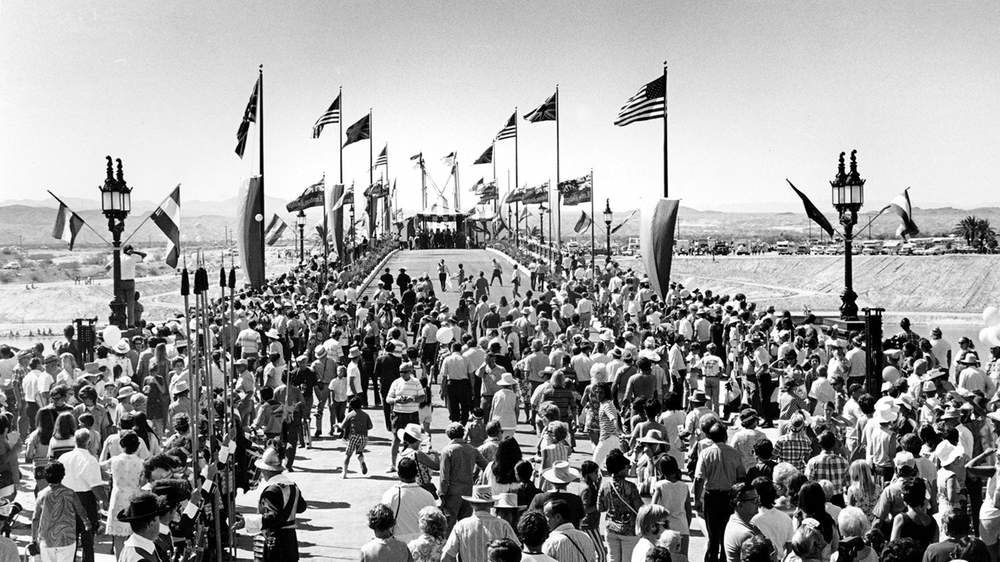 The hot air balloon commissioned by Robert McCulloch rises over the London Bridge during its 1971 dedication. Balloon owner Dean Baker says the balloon will make a reappearance at the bridge during the 50th anniversary activities on Saturday.

In 1968, Lake Havasu City founder Robert P. McCulloch began one of the grandest – and possibly the most absurd – feats in American history. This weekend, Havasu celebrated 49 years since the final stone was set in the bridge that crossed an ocean.

But the novelty can at times be lost on Havasu locals, according to Lake Havasu Museum of History Communications Director Jillian Usher. Today, the bridge occupies an entire wing of the museum, and one of the most frequent questions asked by visitors is where to find it. Its purchase from the city of London still holds the world record for the largest artifact ever purchased. But in her youth, Usher remembers becoming numb to the bridge’s presence in Havasu, as well as the grand undertaking of its arrival.

“I was born and raised in Havasu,” Usher said. “For me, the London Bridge has always just been a part of the Channel. From a historical point of view, I can see the value of it, and how much of an oddity it is – but I didn’t understand when I was growing up.”

It was when Usher traveled away from Havasu several years ago that she came to appreciate the city’s most unique landmark. The London Bridge, the surrounding desert mountains, the water and people are all features that she has since seen with a newfound appreciation, as well as a part of her own identity as a Havasu resident.

“It’s kind of a ‘hometown’ mentality – you don’t really see the value of it until you see it with fresh eyes,” Usher said. “When people know about the London Bridge, and they hear about Havasu, it’s a big part of the cultural identity of this place. The more you learn about it, the more value it has. The numbers on every brick, scratches from bullets that struck it during World War 2 … those little quirks make it interesting.”

Dan Delasantos was a teenager when the bridge was shipped from the United Kingdom to Arizona, block-by-block, to be rebuilt in the Arizona desert. But according to Delasantos, residents weren’t always supportive of McCulloch’s vision. At the time, the size of the undertaking was dwarfed only by its sheer audacity.

“There was no Internet back then, and little was known about it except the local gossip,” Delasantos said. “The whole time it was being shipped in, nobody could figure it out. It seemed simple-minded because nobody had ever done something like this before. They were putting this bridge right in the middle of the desert.”

Early Havasu residents watched with confusion, or occasionally frustration as work crews slowly erected the structure, which had once spanned the Thames River, over barren desert.

“We needed shops, restaurants and jobs,” Delasantos said. “What good was a bridge going to do us in the middle of the desert?”

Information was limited in Havasu, and the bridge was weeks from opening when construction workers began to carve what would become the Bridgewater Channel. That, Delasantos said, was when residents began to see the project’s scope.

“All of a sudden, it was like pulling back a curtain,” Delasantos said. “We could finally see (McCulloch’s) vision.”

Almost 50 years later, the Bridgewater Channel and its surrounding parks are among the city’s most popular tourist attractions, drawing thousands of boaters, residents, families and holiday travelers each year. And above the channel, the London Bridge stands as the city’s most recognizable landmark.

Adorned with lampposts crafted from the melted cannons of Napoleon Bonaparte, it spans almost 300 meters, with most of its original façade still intact.

“If you put it in a local perspective, it’s a part of you,” Delasantos said. “Havasu is so community-oriented. When you think of the bridge you think, ‘This is ours’. It’s a part of the community, and it’s part of the experience of growing up here.”

And for Delasantos, the London Bridge formed lasting memories for himself and many other longtime Havasu residents.

“It was the epicenter for events in Havasu for decades,” Delasantos said. “If you lived in Havasu, it was your everything. It was where you went to meet people for social events. And for people who come back to Havasu, or have never been to Havasu … those people are hungry for stories and history about the London Bridge. It signifies Havasu and the community that grew up around it.”

Originally from the Netherlands, Jan Kassies now serves as Director of Visitor Services for the Lake Havasu Visitor Center. Kassies has led thousands of tours across the London Bridge since 2003, but the bridge was a mystery to him when he first arrived in Havasu.

“I thought it was ridiculous,” Kassies said. “When I came here I was shocked that anyone would buy a bridge and then bring it to the desert. It intrigued me … it still intrigues me that McCulloch did it.”

Kassies studied the bridge for years, as well as its marketing appeal around the globe. Every year, visitors from Canada, Europe, Asia and throughout the U.S. stop at the visitor center to inquire about the bridge and its origins in Lake Havasu City.

“It’s an amazing thing,” Kassies said. “When I lead walking tours across the bridge, I tell the story about how it came here. Every time I tell that story I think that this is the same bridge crossed by the Beatles, the Rolling Stones, Queen Elizabeth and Eisenhower. Every time, I feel kind of amazed.”

15 things you probably didn’t know about the London Bridge

When I was posted to London in 1965 many days I walked across the bridge between my flat and work. When I moved here it was like seeing an old friend. Yes, for a 50th Anniversary celebration!

Something big for the 50th? (And hopefully with something easily accessible for handicapped/disabled).

The Mohave County Board of Supervisors on Monday, Oct. 5 voted 5-0 to adopt a new …