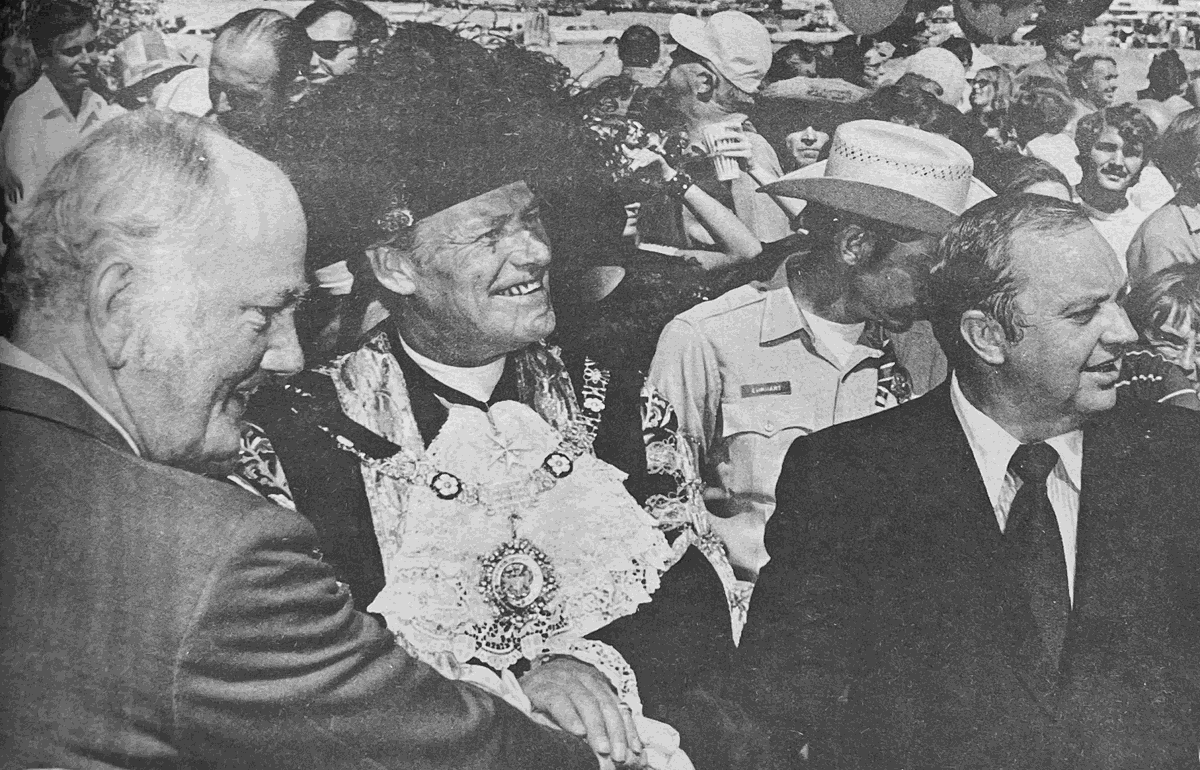 (From left) Robert McCulloch, Sir Peter Studd, Lord Mayor of London, and C.V. Wood clasp hands as they watch the release of the hot air balloon and doves in celebration of the London Bridge's dedication. This photo was published in the Oct. 14, 1971 issue of the Lake Havasu City Herald. 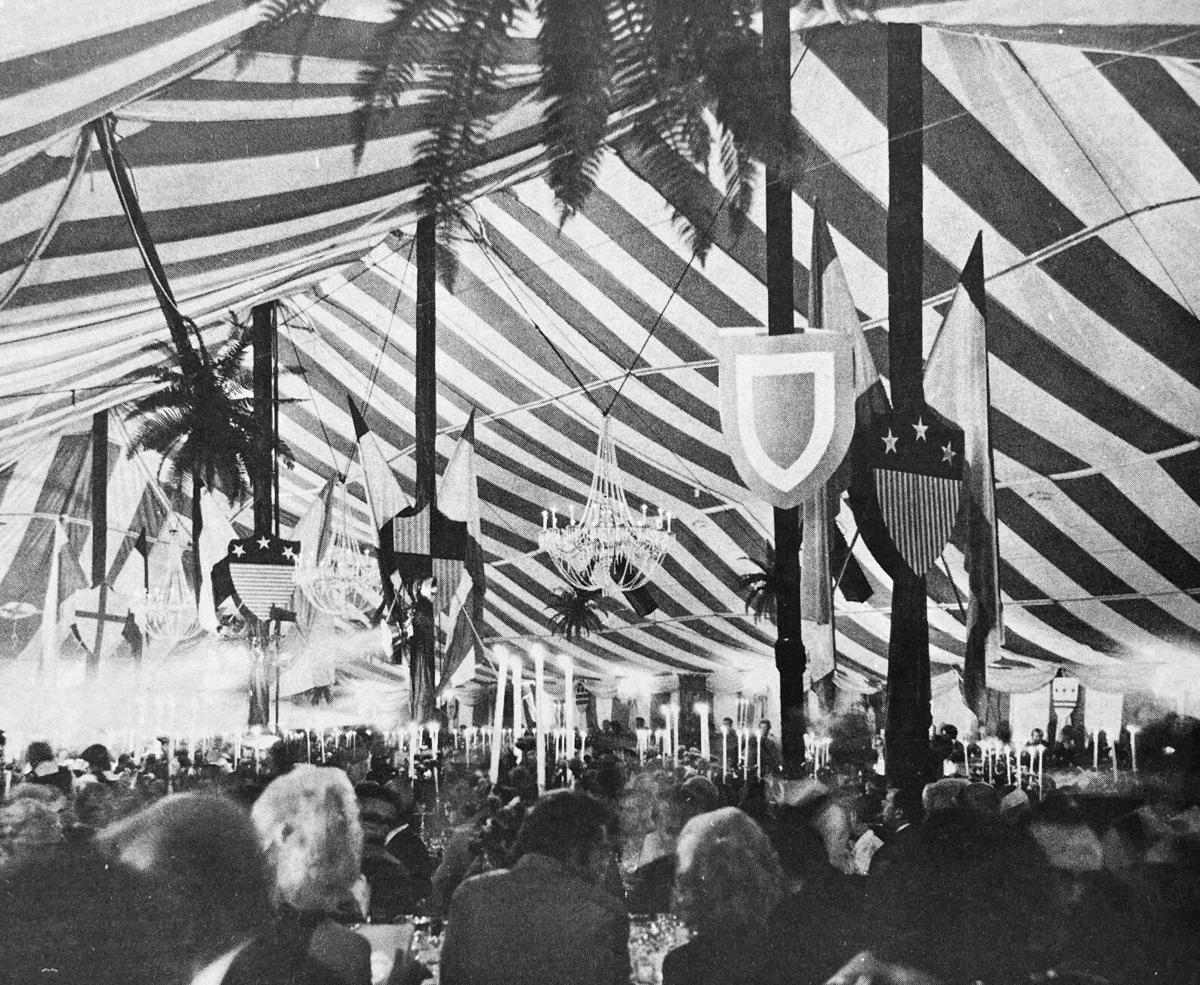 The dedication feast was held in a large tent, similar to the bridge’s original dedication in the 1800s.

The excitement around the world’s largest antique was palpable in Lake Havasu City and, with the reconstruction of the bridge complete, the world famous London Bridge was ready to be rededicated in its new home over Bridgewater Channel.

The gravity of the moment was not lost of those early Havasu residents, and they put together celebrations meant to rival the pomp and pageantry of the bridge’s original dedication 140 years prior.

Although there were lots of events and celebrations surrounding the bridge throughout the month of October in 1971, Oct. 9 and Oct. 10 were the epicenter.

A royal feast was the grand finale of the original dedication in London, but it kicked off the official festivities in Lake Havasu City. The extravagant dinner affair in Havasu on Oct. 9 was a benefit for the Colorado River Indian Tribes’ cultural heritage museum project.

Harkening back to the royal tent provided by the City of London for King William IV, a pair of massive gaily-striped red and white tents were set up on the Island side of the bridge in Havasu for the dedication feast.

After about half an hour of eating, drinking, and mingling in the cocktail tent amidst strolling musicians, singers and entertainers, a blast of fanfare trumpets beckoned the roughly 800 guests outside at about 7 p.m. There they watched as a parade of lighted and decorated boats cruised slowly up Bridgewater Channel and beneath the bridge. Fireworks followed the parade before more fanfare trumpets signaled for the guests to make their way into the larger 80 foot by 160 foot dinner tent that reportedly weighed between 18 and 20 tons.

According to the Havasu Herald, the dinner tent was decorated to the nines complete with three crystal chandeliers, great coats-of-arms, red shields, sconces, urns of flowers, and suits of armor flanking the main entrance, according to coverage of the event in the Oct. 14, 1971 edition of the Herald. The head table in the tent was reportedly 112 feet long while 79 smaller tables were spread throughout the floor of the tent, “each surrounded by ten red-and-gold chairs gleaming with linen, fine china, wine-glasses and silver.”

An 18-by-24 foot stage was set up near the main entrance for the entertainment planned for later than night.

At about 8 p.m. all the guests were seated in the dinner tent, and bag pipes began to play. Then master of ceremonies Lorne Greene – the Canadian actor, radio personality and singer most famous for his role as Ben Cartwright on the Western TV show “Bonanza” - walked to the center of the head table to announce the dignitaries in attendance which included the Lord Mayor of London Sir Peter Studd and Lady Studd, Arizona Governor Jack Williams and Mrs. Williams, Mr. and Mrs. Robert McCulloch, and Lake Havasu City master planner C.V. Wood Jr. along with other British officials and federal, state, and local officials from the United States.

Then the feast began.

According to the Herald, the scope of the festivities required more than 200 tons of food, dishes, cutlery, glassware and utensils to be trucked 300 miles from Los Angeles along with a caravan of 125 cooks, waitresses and kitchen help that stayed in trailers near the tents.

Dinner was a four-course meal prepared by a Los Angeles catering firm. According to the Herald the feast started with lobster Bellevue (a half lobster, removed from the shell, glazed and served with a guacamole sauce) followed by jellied consommé Madrilene a la Russe (with caviar topping), prime sirloin of roast beef, Cornish pasties (small meat-and-vegetable filled turnovers commonly eaten by Cornish miners who came to Arizona in the late 19th century), Canneloni Florentine, and champagne-glazed baby Belgian carrots.

The wine list for the dinner was Charles Krug Chardonnay, Robert Mondavi Cabernet Sauvignon, and B.V. Private Reserve champagne. Guests were given a choice of French vanilla ice cream with Tina Maria liqueur or apricot sherbet with crème de menthe for dessert, along with a piece of large cake shaped like the London Bridge that was served aflame with brandy at each table.

After dinner Gov. Williams kicked off the nights’ speeches, followed by Wood Jr., John Artichoker Jr. (a Sioux Native American who was serving as the Area Director for the U.S. Bureau of Indian Affairs, and represented the Colorado River Indian Tribes), then McCulloch and finally the Lord Mayor of London.

After the speeches concluded, the night’s entertainment began with the Ding-a-Lings, a quartet of singers and dancers that got their start on the Dean Martin Show. They were followed by colorful English comedian Vic Perry who reportedly began his portion of the show by returning various items he had picked from different dignitaries’ pockets during cocktail hour to their rightful owners. After Perry came singer Nancy Ames, followed by comedian Johnathan Winters.

The dance began at 11:15 p.m. with music provided by Les Brown and His Band of Renown until 1 a.m.

Just nine hours later on the morning of Oct. 10, crowds started to gather along the banks of the Bridgewater Channel where they watched stunt flyer Skip Volk’s aerobatic show which ended with 20 parachutists free-falling with streamers of colored smoke trailing them from hand-held flares.

By 10:30 a.m. an estimated 50,000 people were gathered in the town of 8,000 for the dedication ceremony and the first ever London Bridge parade that was to follow.

Set up on the mainland side of the bridge, Lorne Greene once again announced the distinguished guests who arrived to the dedication ceremony by limousines. Dignitaries included Gov. Williams and his wife, McCulloch, Wood, and others. But the Lord Mayor of London took a little bit different route to the ceremony.

Like King William IV and Queen Adelaide before him, Lord Mayor Studd and his entourage arrived at the London Bridge by boat. They climbed aboard a miniature paddlewheel called “Miller’s Folly,” which set out from the Nautical Inn and transported them through Bridgewater Channel to the English Village – which was actually owned by the City of London at the time.

“The official party was escorted by a dozen 17th-century pikemen, each with a sword and 12-ft lance, wearing steel morions (pot helmets), breastplates, back and thigh armour over their brass-buttoned, scarlet-sashed red tunics and knee breeches,” according to an article in the Oct. 14, 1971 edition of the Herald.

Leading the Lord Mayor in the procession were Brigadier Robert Home Stewart Popham and Common Cryer and Serjeant-at-Arms Lt. Col. St. John Carslake Brooke-Johnson walking side by side in their full ceremonial dress and bearing the sword and mace associated with their respective offices. Behind Lord Mayor Studd, who was also in the ceremonial dress of his office, were the High Sheriff of London – Alderman Henry Murray Fox – and the Chief Commoner, Deputy Leslie Barnett Prince.

Upon the arrival of the delegation from London, the Lord Mayor and Governor exchanged greetings which kicked off a 19-gun salute, a heralding by fanfare trumpets, and the playing of both “Good Save the Queen” and “The Star-Spangled Banner.”

Following an invocation and speeches by Williams and Studd, the two statesmen pulled a cord that signaled the rise of a 70-foot hot-air balloon with a 12-foot dove-shaped basket. As the balloon ascended it unveiled the plaque on the London Bridge opposite the cornerstone on the mainland side. Then 30,000 helium filled balloons were released along with 3,000 pigeons.

As the balloons and birds flew off into the desert sky, the first band started playing a triumphant march. The parade was led by a Native American honor guard with costumed musicians and dancers. They marched through the tent that was still set up from the night before, across the London Bridge, through the grandstand area along Bridgewater Channel, before heading up McCulloch Boulevard.

The Native American honor guard was followed by a group of 150 Boy Scouts, carrying the flags of all 50 states. Then came a series of about 10 floats depicting the history of the bridge from Roman soldiers who likely built the first bridge to London over the Thames River in about 44 A.D., a float portraying the Vikings who literally pulled down the London Bridge with their ships in 1014, a float about the builders of the first stone bridge completed in 1209, another float portraying a water-spouting whale, referencing a while that was stuck under the Old London Bridge in 1252, and much more.

According to the Herald it was the largest parade held in Mohave County at the time. It reportedly included 3,500 participants and stretched for nearly a mile. It included a total of 15 bands from all over the western United States.

Bringing up the caboose were McCulloch and Studd seated in a carriage. They were escorted by 18 members of the Westminster (Calif.) High School Guardsmen Band who were dressed as “beefeaters,” the common name for the Tower of London’s Yeoman of the Guard.

When the parade ended, a group of Texas businessmen called the Odessa Chuck Wagon Gang held a huge barbecue open to all comers. A water ski show was scheduled for the afternoon, which the Herald reported was meant to include an attempt by Australian skier Bill Bennet to break the world ski kite flying altitude record of 2,890 feet. It was not clear from the Herald’s reporting whether the world record attempt was made, or if it was successful.

Meanwhile, the grandstands along the channel turned into a carnival-like atmosphere throughout the afternoon and into the evening.

At dusk, the two-day long dedication celebration came to a close with a sunset religious services and rally held at the London Bridge and led by American actress, singer, and songwriter Dale Evans Rogers and Evangelist Carl Winters.