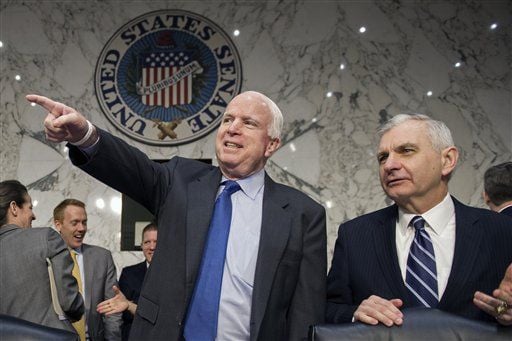 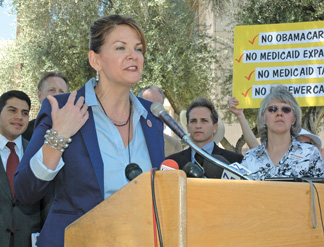 PHOENIX — Sen. John McCain announced Tuesday that he will run for re-election in 2016, making official a move that has been widely expected for the Republican as he looks to extend his nearly three-decade career in the Senate.

Ward said she is still "testing the waters" but knows she'll have to raise between $5 million and $10 million to beat McCain, who already has more than $3.5 million in cash on hand and the ability to raise much more. "Being able to raise money is going to be very important. I think that's very important in a David and Goliath situation," Ward said.

Ward said she has started to put together a “bare bones team” to help her explore whether mounting a challenge would be possible. Ward said she had talked about a possible run with her husband and three kids, preparing them for “the attacks that are bound to come, whether they are true or just made up.” But the major challenge Ward would face in a possible challenge is financial. She plans on traveling throughout the state over the coming weeks and months and measuring whether she can muster the financial wherewithal to take on McCain and his multi-million dollar war chest. “I’ve been hearing from a lot of people all over the state and all over the country that might be ready for something different, a new voice…” Ward said. “People are looking for a bold new voice, someone not afraid of Washington insiders, not afraid of the establishment.” When asked if McCain represented “Washington insiders” and “the establishment,” she responded with a simple, “Yes.” “After 30 years, it’s hard not to be,” she added.

McCain described his plans to run before an Arizona Chamber of Commerce and Industry luncheon in Phoenix, receiving a loud applause when he told the crowd: "With a full heart, I ask Arizonans again for their support as I seek re-election to the United States Senate. I'm as determined as ever to deserve your trust and grateful as ever for the privilege." His appearance before a pro-business crowd put him in friendly territory ahead of a race in which he will likely face a challenge from the right amid tea party dissatisfaction over his record in the Senate. McCain will be 80 by Election Day, but says he is in great shape and has much work to do in the Senate. "I work 16-hour days. Look at what I've done for Arizona and America," he told The Associated Press. "Make your own judgment." McCain is a former prisoner of war during the Vietnam War who was first elected to the Senate in 1986, replacing longtime conservative stalwart Barry Goldwater. He ran for president in 2000 and secured the Republican Party's nomination in 2008, losing to Barack Obama. He coasted to re-election to the Senate in 2010 and has signaled on several occasions in recent months that he was planning to seek a sixth term. McCain said he will emphasize local issues during his campaign, such as the drought, his work to benefit a copper mine and legislation to reform the Department of Veterans Affairs. The VA was thrown into turmoil last year amid allegations of misconduct and cover-ups at the VA hospital in Phoenix. The state Republican party's leaders, dominated by conservatives, censured McCain last year for not being sufficiently conservative, but he's brushed off the criticism. A spokeswoman for the Arizona Democratic Party called McCain an "angry man who pontificates on pretty much anything. "McCain's not going to do anything to help working families in Arizona," party spokeswoman Barbara Lubin said. "He lives for the media interviews. He certainly is not a statesman, and I think that he's just publicly differing with the president just to get himself press. That's all he lives for these days." Glenn Hamer, president of the Arizona Chamber, said McCain never takes anything for granted in a political race and has a deep reservoir of support in Arizona. That combined with his national security credentials should easily overcome any primary challenge in 2016, Hamer said. "I would expect that he would be overwhelmingly re-elected," he said. McCain was elevated to chairman of the Senate Armed Services Committee this year after his party reclaimed the Senate. He has repeatedly used his prominence on the committee to attack Obama on foreign policy, ridiculing what he called a "feckless policy of leading from behind."

U.S. Sen. John McCain has announced he will run for re-election in 2016.

Man accused of sexual assault against minor released on bond

The Parker Town Council has rescinded its declaration of March 20, 2020 of a local…