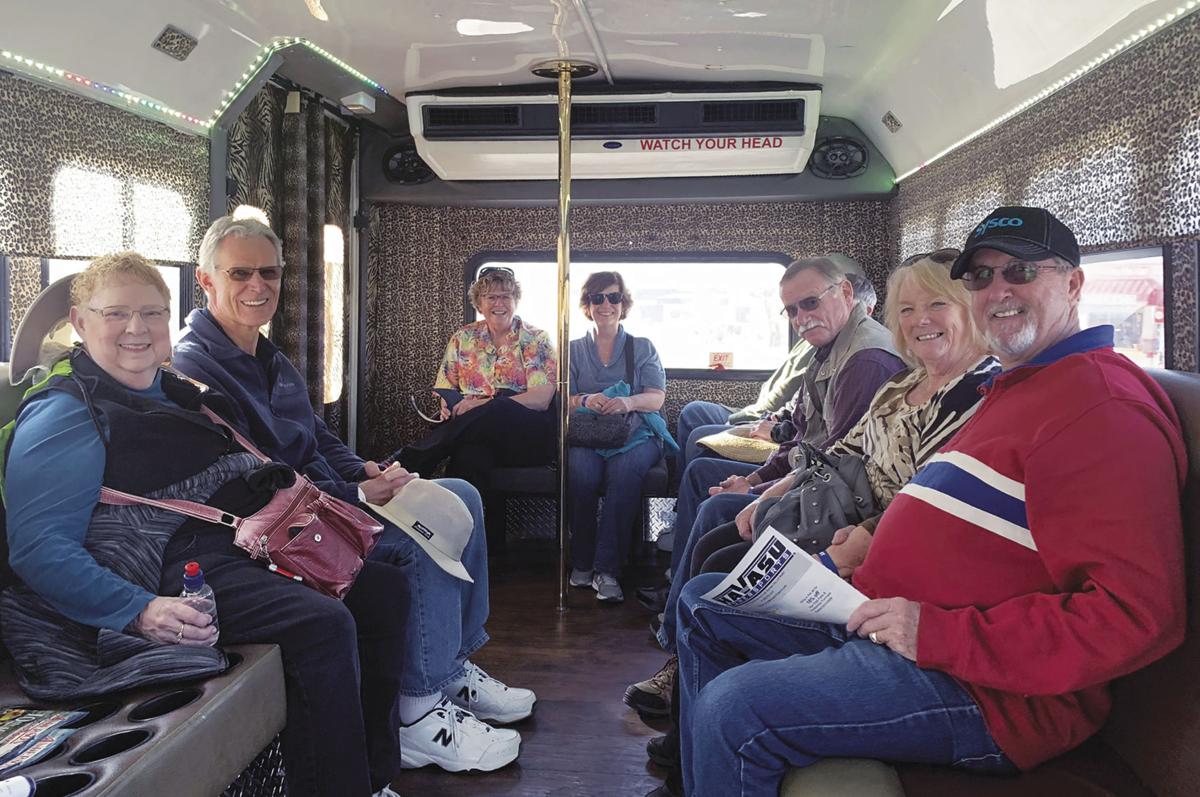 Havasu Balloon Festival & Fair attendees smiled for the camera and cracked jokes about the gold pole and numerous cup holders as they caught a ride on the Havasu Party Bus on their way back from the event. 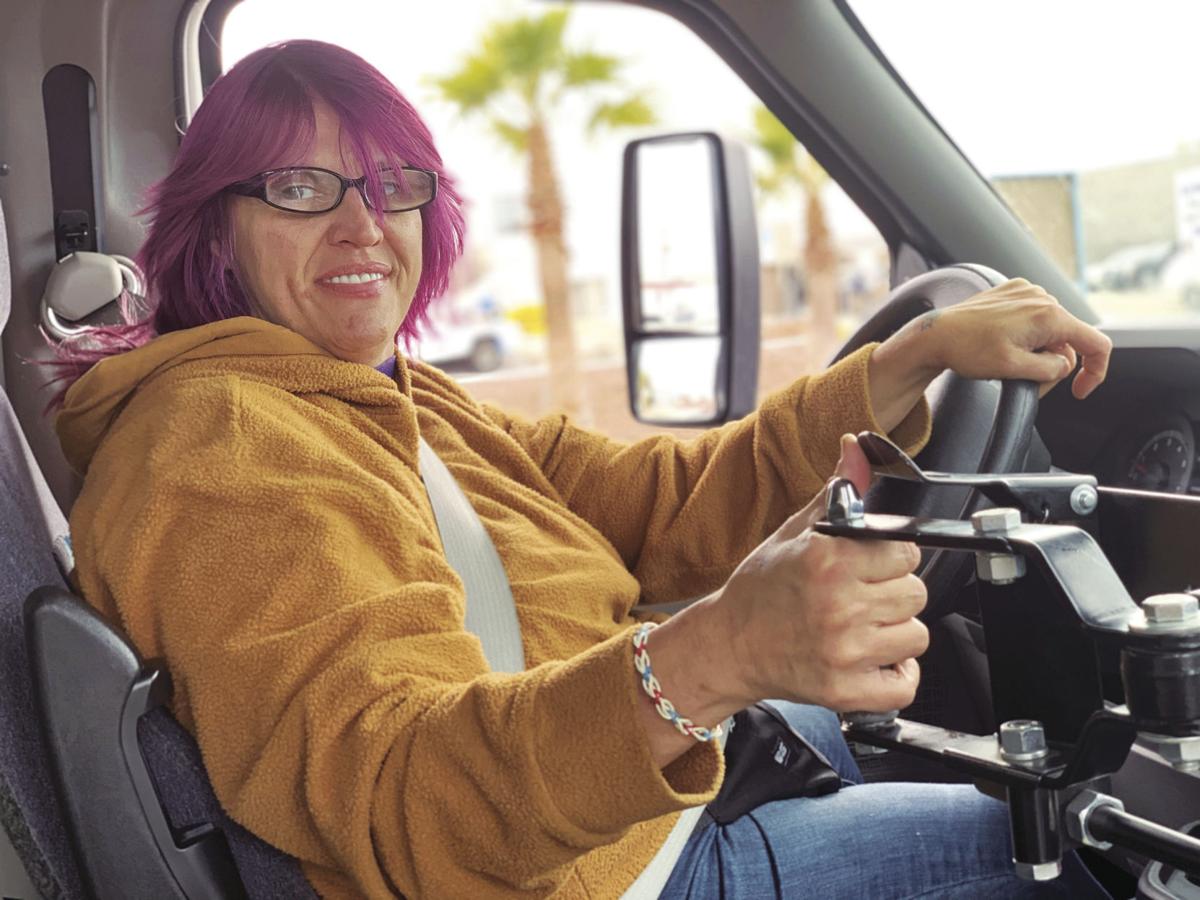 Cheryl Vollmann has been living in Havasu with her husband and pets for 13 years now. She drives a bus for New Horizons Center, and she helped shuttle people to and from this weekend’s event.

Havasu Balloon Festival & Fair attendees smiled for the camera and cracked jokes about the gold pole and numerous cup holders as they caught a ride on the Havasu Party Bus on their way back from the event.

Cheryl Vollmann has been living in Havasu with her husband and pets for 13 years now. She drives a bus for New Horizons Center, and she helped shuttle people to and from this weekend’s event.

A year ago, Cheryl Vollmann was towing illegally parked cars away from the Havasu Balloon Festival & Fair. This year, she’s doing quite the opposite.

With her small white bus from New Horizons Center, Vollmann is spending the weekend buzzing — or busing, rather — all over town. She’s part of a team of drivers that shuttle eager Balloon Festival attendees and volunteers to the event grounds.

With five different offsite parking locations, it takes a lot of wheels and manpower to make sure that people make it to and from the event in a timely and safe manner. The lots are located at Mohave Community College, Pima Wash, Lake Havasu High School, the transfer station (behind Desert Rose) and the Aquatic Center.

Vollmann has long shifts ahead of her, working until close and all day on Saturday. She’ll start well before sunrise at 6 a.m. and take a final busload at 10 p.m. The buses rotate their stops and shifts to make sure that each lot is visited by a bus about every 15 minutes.

But Vollmann chuckled as she said, “At least doing this, I make people happy instead of angry.”

She also sees it as the perfect opportunity to give back to the community that she has lived in and loved for 13 years.

“I figured I would volunteer because you’ve gotta give back somehow,” Vollmann said. “I’m sure someone has volunteered their time and services for me somewhere down the line.”

With the windows rolled down, a cool breeze blew through the bus as it roared on down the road. Vollmann is from Chicago, so she has a true appreciation for the warmer climate. The prices, events and weather are “unbeatable,” she said. Her husband and their pets “wouldn’t give it up for the world,” she said.

Solomon “Too Tall” Olson is another driver that might happen to give you a ride this weekend. Standing at 6 feet and 5 inches — hence the nickname — Olson originally hails from Minnesota, where he grew up on a game farm and helped take care of about 2,000 animals, no matter the weather. Havasu’s climate is also what he’s enjoyed the most since moving here in 2005.

His bus also is white and compact, but it has a different vibe altogether. The sides boast the Havasu Party Bus name, and inside, you’ll find cheetah print wall fabric, long leather benches, plenty of cup holders, neon lights, and a floor-to-ceiling gold pole that shines brightly in the back.

As Elvis played over the speakers and festival goers sat quietly and politely along the benches, Olson cut in and said, “This is way too quiet for a party bus. I’m going to have to start playing Kenny G pretty soon.”

That really kicked off the mood, with riders laughing and cracking jokes about the logistics of utilizing the gold pole while the bus is in motion and nudging their buddies to go ahead and “demonstrate.”

Big yellow school buses also joined the fleet, allowing for plenty of passengers to hop on or off at some of the more popular parking lots. As riders took their seats and boarded, they asked one another if they were locals or traveled in from out of state.

When asked, 60-year-old Kam Traynham pointed to a small Blue Bird bus with solar panels on the sides parked in the dirt lot adjacent to the Aquatic Center and said, “I’m from wherever I park that thing!”

Her “skoolie” bus, affectionately named “Freedom,” has been converted into her home, which she shares with her Chihuahua and gray tabby cat. Her journey to Havasu started in Louisiana, and she’s clocked 3,500 miles since September in her ride.

“This is my first time to Havasu, and Arizona, even,” Traynham said. “I keep telling people that it’s the most beautiful state.”

She’s most looking forward to seeing the hot air balloons and having some sweets from Mr. Fudge, one of the vendors, during her first visit to the festival. Mackinac Island, Michigan, was where she grew up, and Mr. Fudge just so happens to use a recipe from the same place, she explained.

After Havasu, she’s headed to Yuma and then off to Ehrenberg for Skooliepalooza 2020. Being on the move is important for Traynham’s health, and living the “skoolie” life is the perfect way to stay mobile — literally.

“You see a lot of people my age just sitting around, waiting to die,” Traynham said. “But I want to live.”

She’ll be living it up at the Balloon Festival with thousands of others this weekend, as the event continues today through Sunday night.

Prayer Shawl Ministry offers solace to those in distressing situations

Craftsman enjoys projects where the wood does all the talking

Woodworking in the desert can be a challenge. Understanding the nature of wood is a must.