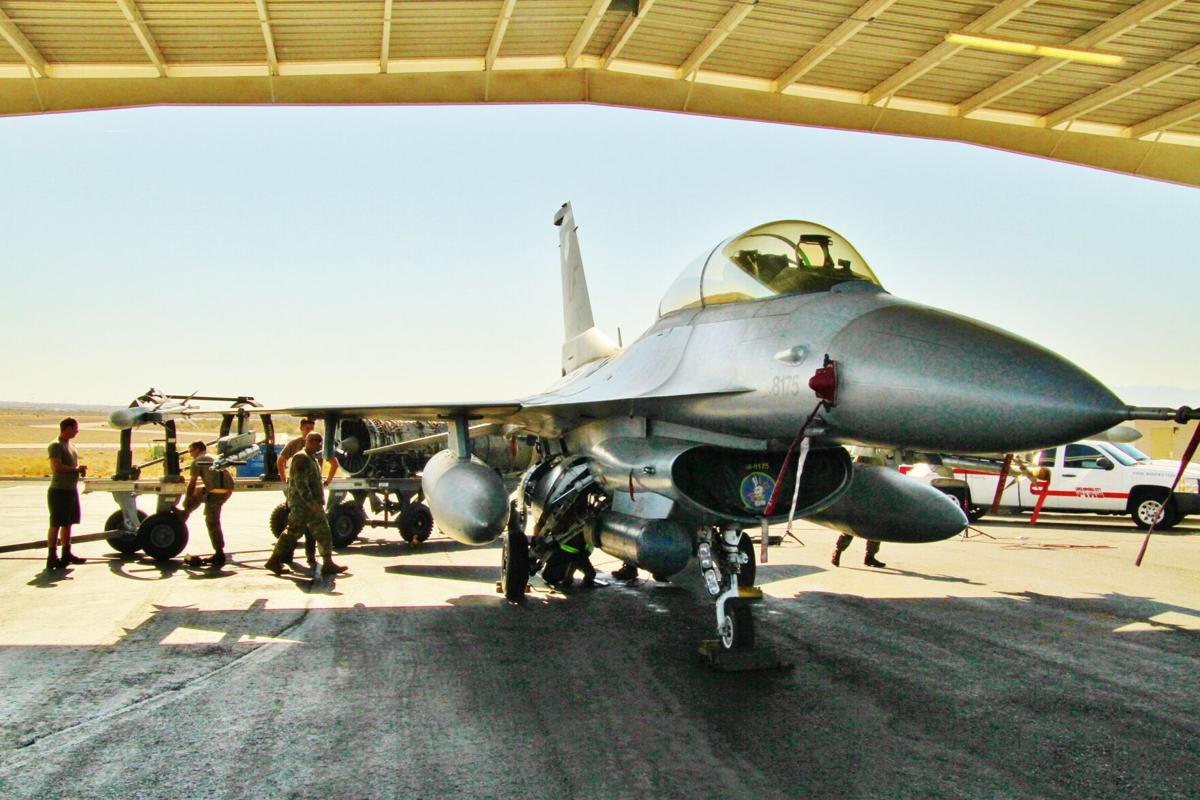 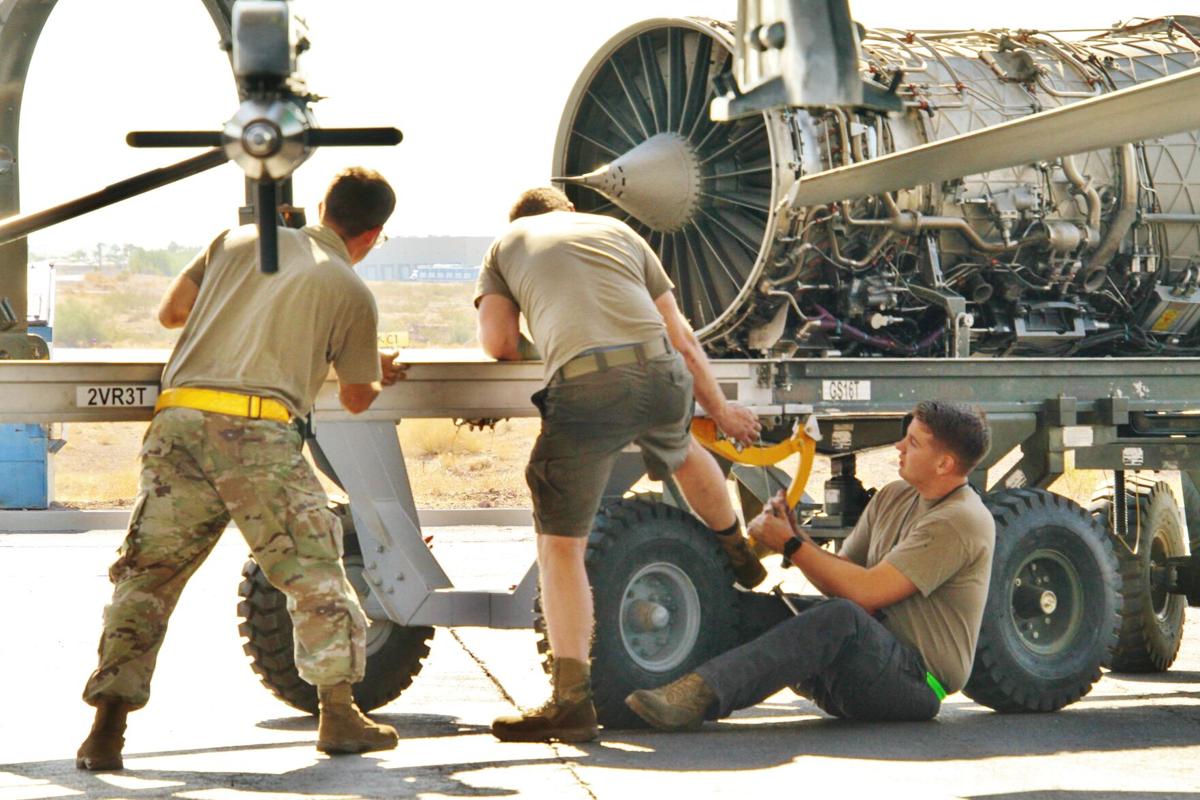 A Luke Air Force Base maintenance recovery team removes an engine from an F-16 fighter aircraft Thursday at Lake Havasu Municipal Airport. The aircraft’s engine is expected to be replaced by Friday, before it is flown back to its home base.

A Luke Air Force Base maintenance recovery team removes an engine from an F-16 fighter aircraft Thursday at Lake Havasu Municipal Airport. The aircraft’s engine is expected to be replaced by Friday, before it is flown back to its home base.

The U.S. Air Force had to resort to unusual methods Wednesday evening in delivering a replacement jet engine to Lake Havasu Municipal Airport.

When an F-16 fighter jet was forced to make an emergency landing at the airport due to engine failure, officials at Luke Air Force Base dispatched a crew to examine the aircraft and conduct any repairs necessary to get it airborne.

“As soon as we were notified, we assembled a maintenance recovery team,” said Air Force Master Sgt. Christopher Ammons, of the 56th Fighter Wing.

A replacement engine for the aircraft was transported to Havasu on Wednesday, according to Ammons, but unloading the engine was somewhat more difficult.

“We could only move the engine off its trailer, but there wasn’t a loading dock at (Havasu’s) tiny airport,” Ammons said. “We had to get the next best thing.”

The Air Force maintenance crew transported the jet engine to Havasu’s Home Depot location, where they requested use of the business’ loading dock. The engine was offloaded at Home Depot, where the crew rolled it through the aisles of the business and out through the location’s front doors. From there, the engine was transported across State Route 95 to Lake Havasu Municipal Airport.

“We made the most of the resources we had,” Ammons said.

According to Home Depot Store Manager Becca Saunder, the Air Force’s request came as a surprise, but staff were eager to help.

“They came into the store and told us they had a situation with a plane at the airport,” Saunder said. “They needed to get their equipment offloaded, and asked if they could use our dock. They brought a cart with them, and brought it through the store to walk through our door … we had to clear our main aisle to make room for them.”

According to Saunder, store employees enjoy opportunities to aid the military and community when needed.

“They were really happy to do it, and they were excited to see it,” Saunder said.

On Thursday, Air Force personnel removed the faulty engine from the F-16, which rested at the southern edge of the airport. Ammons estimated that the failed engine took about eight hours to remove from the aircraft, and the new engine would require eight hours to secure before the plane could be made ready to fly.

“Havasu has been amazing, with help from the police and Home Depot,” Ammons said. “This has probably been one of the smoothest recovery teams I’ve been on.”

The incident earlier this week, which forced copilots Kristopher Holstege and Brian Crawford to make their emergency landing at Lake Havasu Municipal Airport, was the second such incident in the past three years.

In April 2018, another pilot of Luke Air Force Base’s 56th Fighter Wing was forced to make an emergency landing in his F-16 at Havasu’s airport. Although significant damage was caused to the aircraft in that incident, the pilot was able to eject safely.

“This happens very rarely,” Ammons said Thursday. “Most of our engines come from a civilian company, Pratt & Whitney. We work very closely with them to make sure the engines in these aircraft work efficiently.”

The plane involved in this week’s emergency landing has been in service at Luke Air Force Base, in the Phoenix area, since 1990.

“They’re getting pretty old,” Ammons said. “It’s one of the older jets in the military today.”

So no picture of the jet engine being pushed down the center of the Home Depot? Booo! Do better please. Love the article.