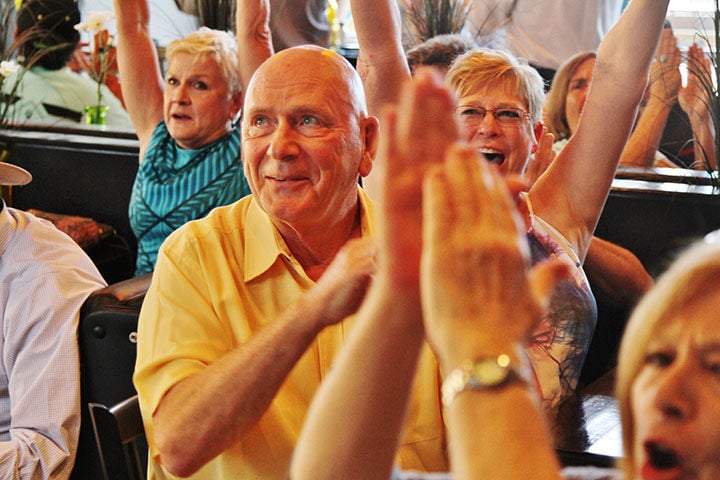 Former Lake Havasu Partnership for Economic Development President Gary Kellogg applauds as the ABC competition names its finalists. Kellogg served as the PED’s president early in the competition, before his retirement in early 2016. 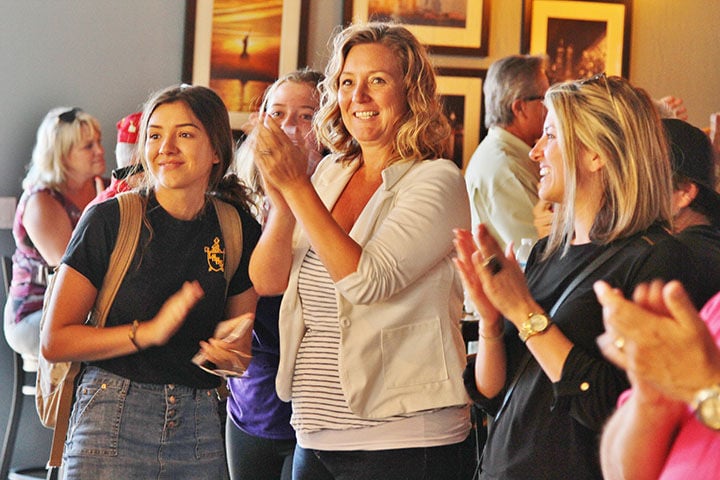 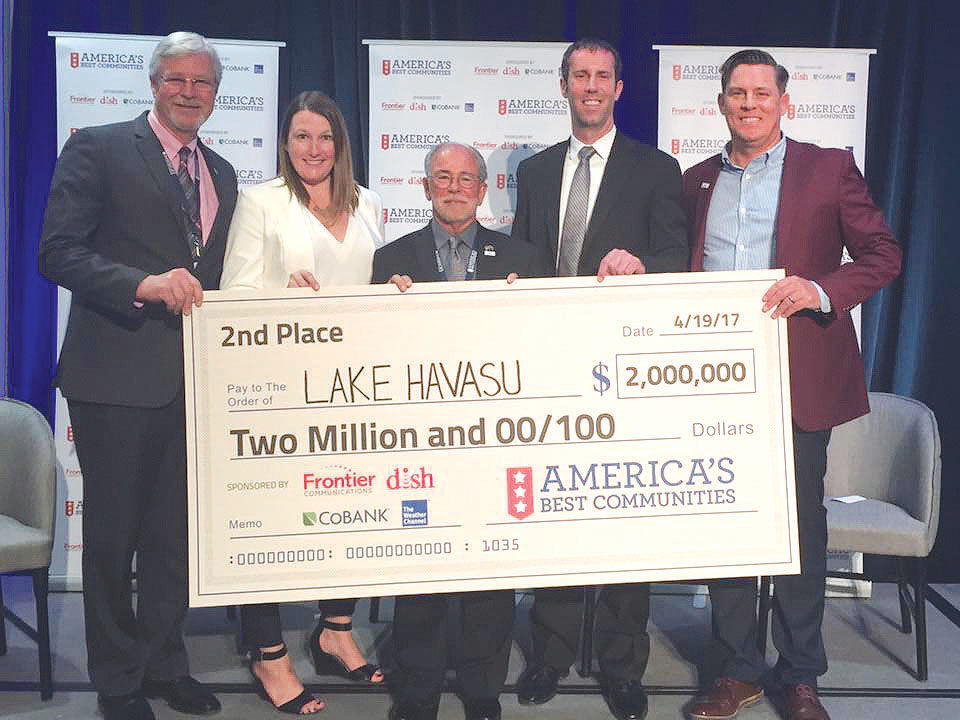 Former Lake Havasu Partnership for Economic Development President Gary Kellogg applauds as the ABC competition names its finalists. Kellogg served as the PED’s president early in the competition, before his retirement in early 2016.

Havasu residents and community leaders gathered at the establishment Wednesday afternoon to witness the culmination of more than two years of planning and effort in Frontier Communications’ “America’s Best Communities” Competition. The crowd sat upright in their seats, some standing as the announcement was live-streamed from Denver. Lake Havasu City placed second among the top eight contenders in this final round, represented by Mayor Mark Nexsen, City Councilman Cal Sheehy and Lake Havasu City Partnership for Economic Development Vice President Tonya Krueger.

“It was the community that made this happen,” Nexsen said. “We were just the messengers. They worked so hard on this, and they were so excited to be involved. If there’s one message I can deliver, it’s: ‘Lake Havasu City, I’m proud of you.”

The announcement brings not only recognition to Havasu, but an additional $2 million for projects, in addition to $150,000 in grants from the competition toward Havasu’s community goals. The first place winner, Huntington, West Virginia, will claim $3 million for its economic and community development.

Huntington had big aspirations from the contest’s outset, according to Huntington Communications Director Brian Chambers. The plan set forth by Huntington officials focused on revitalizing the city’s entire community; and specifically targeted three of the city’s distressed neighborhoods. With Huntington’s victory, Chambers says his city has a chance to represent the whole of the Appalachian region.

“This competition put a spotlight on small towns throughout America,” Chambers said in a telephone interview. “It motivated us, and it made us all move very quickly. It raised the bar for every community involved.

“We congratulate Lake Havasu City,” Chambers said, “and each of the other competitors who made it this far. No one should hold their head tonight. This competition was a celebration of small communities…We are the heartbeat of the country. We represent small communities throughout the U.S., and we wear that with pride.”

The plan behind Havasu’s competitive success has become known as “Vision 20/20,” a program encompassing sectors of tourism, economic development, education, water conservation and community development efforts. It was the first plan of its kind, incorporating efforts from city officials, the Lake Havasu City Convention and Visitor’s Bureau, the Lake Havasu Area Chamber of Commerce, the PED and perspectives from residents throughout Havasu.

“It doesn’t stop today just based on the winnings,” Sheehy said. “We have an opportunity to move our plan forward quicker. The entire team did a great job today in sharing the future of Lake Havasu City. They were able to share the vision that our community has and the work we’ve put in to make the vision a reality.”

City officials maintain that the plan, written based on the goals and hopes of Havasu residents, will remain the guiding framework of Havasu’s development for decades to come.

With the America’s Best Communities Contest wrapped up, the Lake Havasu Vision 20/20 revital…

Congratulation's are in order for this crew to pull off this victory. Lake Havasu City pales when compared to the contest winner, Huntington, West Virginia and 3rd place Statesboro, Georgia. They have universities, major industries and employment, historic bustling cities, etc, etc, etc. We have ................. wastefinding, an Arch, a bridge, a couple of new park purchases, in no way compare to the other two contest winners, and ............... no money to revitalize anything[sad]

Is there a website where we can view the plan and it's goals? Will the prize money and grant money be used solely for any projects identified in the plan?
Lake Havasu is a great place to live and we appreciate the effort put forth by all involved for our city, Thank You!

Congratulations to LHC! Your hours of dedication to the project and the cooperative teamwork resulted in a wonderful outcome!

With more people making their way outdoors again, people are eager to get on the w…