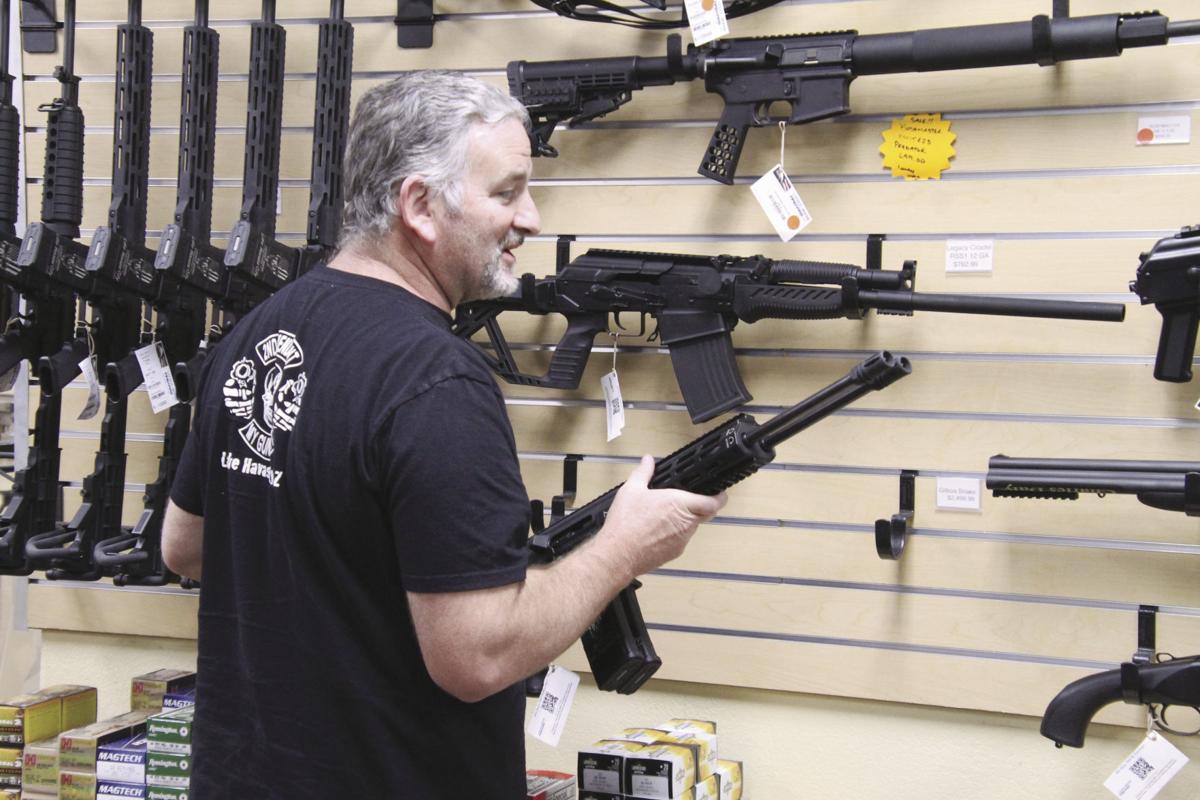 London Bridge Firearms Manager Scott Mitchell agrees with Mohave County’s resolution to declare itself a Second Amendment “sanctuary” on Monday. “I think it’s great,” Mitchell said. “If other places are going in the other direction as ‘sanctuaries’, why shouldn’t we be one?” 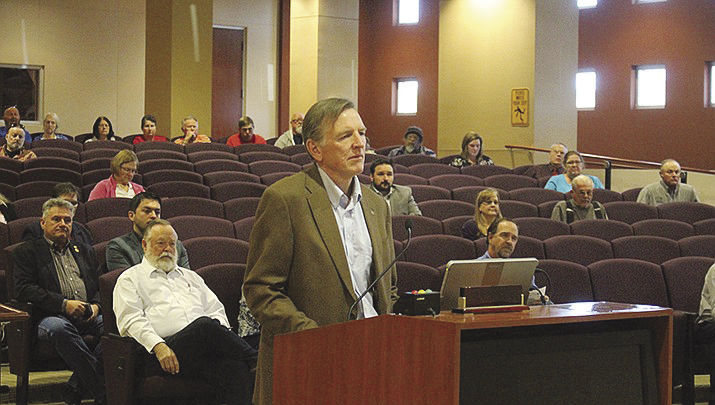 Rep. Paul Gosar speaking in front of the Mohave County Board of Supervisors in support of the resolution on Monday.

London Bridge Firearms Manager Scott Mitchell agrees with Mohave County’s resolution to declare itself a Second Amendment “sanctuary” on Monday. “I think it’s great,” Mitchell said. “If other places are going in the other direction as ‘sanctuaries’, why shouldn’t we be one?”

Rep. Paul Gosar speaking in front of the Mohave County Board of Supervisors in support of the resolution on Monday.

Mohave is now a “sanctuary” for Second Amendment rights, after a unanimous vote by the Mohave County Board of Supervisors.

A crowd gathered in the county’s meeting hall in Kingman on Monday to speak in favor of the resolution, including Congressman Paul Gosar, Arizona Senator Sonny Borrelli and state legislator Leo Biasiucci. To some, the declaration was an affirmation of the county’s desire to protect residents’ rights to arm themselves. For others, it was a rebuttal to the concept of a “sanctuary” in another context throughout the country.

“While we’re voting on this here, in (Tucson) they are voting on whether to become a ‘sanctuary city’ for illegal immigration,” said board chairwoman Hildy Angius. “Everyone will understand what we meant to do here today.”

For now, the resolution serves no purpose other than to declare Mohave County’s stance, and its intention to defend its residents Second Amendment rights, should such become necessary.

“(The resolution) is nothing legally binding,” Angius reiterated at the meeting. “It’s a statement by a government entity about something we feel strongly about. It’s not a law or an ordinance – it’s a resolution of support. We have the support of the Sheriff, and if it ever gets to the point where the courts would have to get involved because of gun laws implemented by the feds or the state, we would step up and fight them.”

Mohave County Democratic Party Chairwoman Mary McCord Robinson also spoke at the meeting, and was the one member of the public to oppose the resolution – not because she disagreed with it, she said, but because she believes county residents should have a better understanding of what the term, “sanctuary,” means in the context of gun rights.

“I’m a gun owner,” Robinson said. “I own lots of guns, I carry concealed and I have my permit. What I’m opposed to is bringing (the resolution) forward at this time. I think there needs to be more discussion, and there needs to be a better understanding of the issue. I don’t think people really understand what it means to be a sanctuary city … and I don’t think Mohave County is at risk against ‘red flag’ laws. (The resolution) adds more divisiveness that we don’t need right now.”

A regional stance against gun restrictions

The board’s decision Monday follows a similar declaration in August by the city of Needles, California, which identified itself as a “second amendment sanctuary” for gun owners frustrated with California legislation allegedly restricting residents’ right to bear arms.

“Anyone who’s been paying attention to what’s going on around us sees there’s traction to implement gun control laws here in Arizona,” Angius said. “Things are happening at warp speed and happening incrementally. You’ll look around and say, ‘What happened to my country? What happened to my rights’? I refuse to let that happen here without a fight.”

Angius proposed Monday’s resolution to name Mohave County a “sanctuary” for Second Amendment rights, and says she has received support from many members of the community.

“For me, this is a statement from Mohave County that if congress, the state legislature or the governor passes laws that infringe on our Second Amendment rights, with the help and leadership of our county sheriff, they’re in for a big fight. I hope other Arizona counties will follow suit.”

Mohave County Sheriff Doug Schuster spoke in support of the resolution Monday morning, assuring the board and members of the audience that he has, and would continue to uphold the rights of county residents.

“Myself and my staff swore an oath to defend the rights of people that were bestowed upon them by the U.S. Constitution and the Arizona Constitution,” Schuster said. “I’m an ardent supporter of the Second Amendment. There will always be a need to regulate the use of firearms for the safety and security of our communities – however, the rights of our citizens to carry firearms will, God willing, never be infringed … The day they outlaw guns is the day your sheriff becomes an outlaw.”

According to Gosar, the perceived threat to citizens’ Second Amendment rights is evident on the national stage, and will become an important issue during the 2020 Presidential Election.

Gosar believes Democratic rivals in Congress may be taking steps to undermine Americans’ gun rights, and praised Mohave County’s stance in affirming those rights for the county’s residents.

“You see this fast encroachment in the federal government. This is a rare opportunity to see what you’re for and what you’re against … this is about the strength of empowerment. Thousands of crimes are thwarted each year because a citizen had the personal protection of the Second Amendment. The Second Amendment is there for tyranny against a government that is overbearing. I applaud you for making this commencement … thank you for standing up for American citizens and the Second Amendment.”

According to state legislator Leo Biasiucci, of Lake Havasu City, Mohave County’s resolution was symbolic not only to Arizonans, but to others beyond Arizona’s borders.

“There are a lot of people moving to Arizona, and it’s important to show this is a county that supports their Second Amendment rights. I think it’s vital in getting the right people to move to our district.”

“We’re starting to see bills come through the legislature from the other side of the aisle, trying to control and take away our gun rights,” Biasiucci said. “I will always be a ‘no’ vote on any bill that tries to take away those rights … at the moment (Republicans) have a 31 to 29 advantage. People need to know how important it is to elect people who are going to protect our Second Amendment rights. The moment that’s gone, I think our country is over.”

According to Borrelli, assertion of Arizonans’ Second Amendment rights is a challenge to his liberal contemporaries.

“The other side of the aisle keeps pushing to undermine more and more of the constitution,” Borrelli said at the meeting. “I support the rights of citizens to defend themselves. They should be able to maintain that God-given right.”

According to Angius, Mohave isn’t the first county in the country to adopt such a resolution, and she’s encouraging others to do the same.

“All over the country, it’s a movement,” Angius said. “We have open carry laws, concealed-carry laws … nothing’s happening yet. But if there are things happening around the country and around the state. If the federal government moves on our Second Amendment rights, we’re going to fight it with whatever means we have. I’m hoping the rest of the state and other counties follow suit. What we’re trying to get is a statewide nullification, if the federal government does pass a law restricting our Second Amendment rights.”

NEEDLES -- The City of Needles has declared itself a Second Amendment sanctuary city, a firs…

With measures taken by the city of Needles in asserting gun owners’ Second Amendment rights,…

The satisfaction in the guys face holding the weapon is a little bit perverse for me.

If you need an AR15 to protect yourself, you've made some poor decisions in life. Especially in a small town like Havasu.

Well it's now "official" the idiots on FOX and Friends did a piece about this stupid move. Once again we are the laughingstock of the nation.

Mr. Biasiucci states he wants to attract the right kind of people to our district, with the passage of this stupid proclamation.Does he mean the low education, low income, crabby old white folks ? That sounds about right.

Hey, the ammosexuals have to do something to compensate for their small (hands)!

You have to admit there is nothing these morons won't do to keep us at the forefront of being the laughingstock of the nation.

I agree HwyRovr. Are these clowns saying that our 2nd Amendment rights don't exist without their stupid proclamation? What a waste of public time and money. When are we going to pass a proclamation to insure we are a 1st Amendment sanctuary county? What about the rest of the Amendments and our Bill of Rights?! Can we save our Constitution???? Morons....

The second amendment is the biggest threat to the first amendment.

No swimming, boating or fishing: Colorado River access is closed on tribal land near Parker in CRIT's stay-at-home order