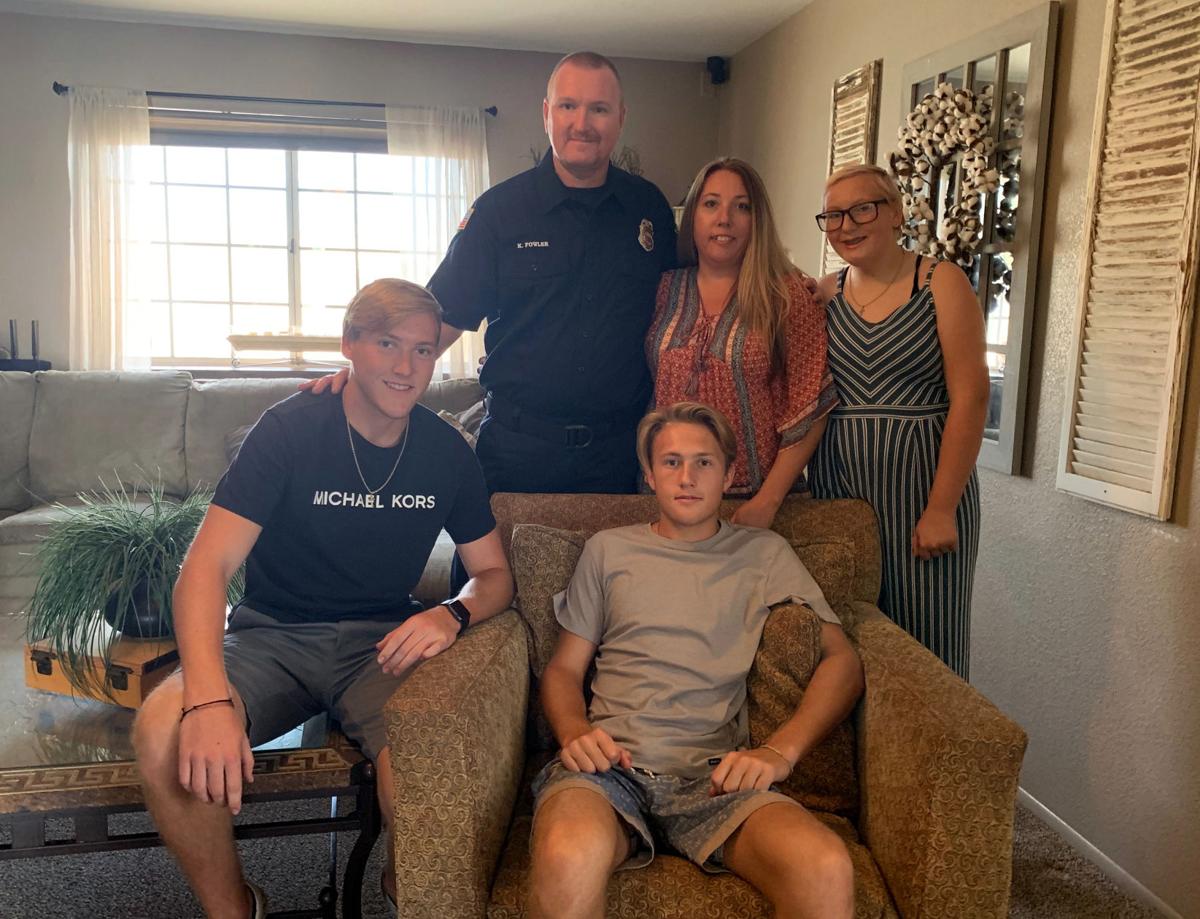 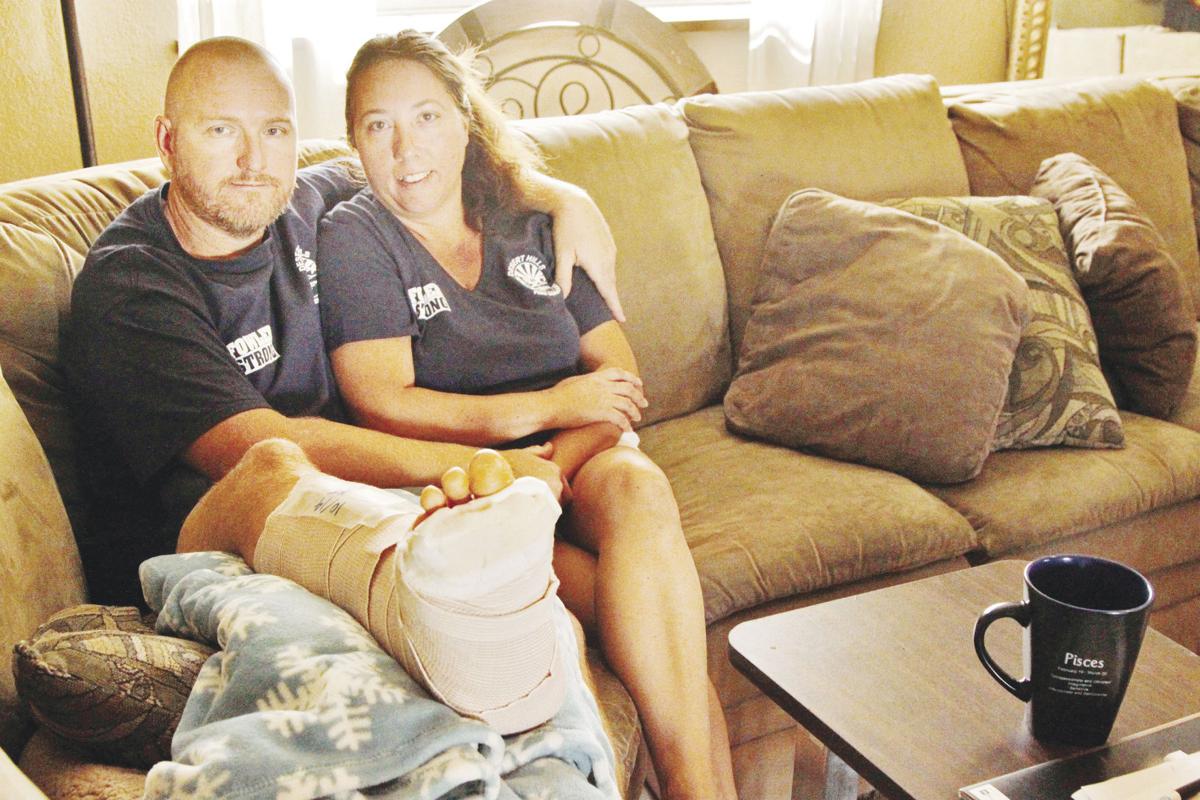 Desert Hills Firefighter Kurt Fowler and his wife, Trina Fowler, remain in their Lake Havasu City home as Fowler recovers from a wound received during this month’s mass shooting in Las Vegas. 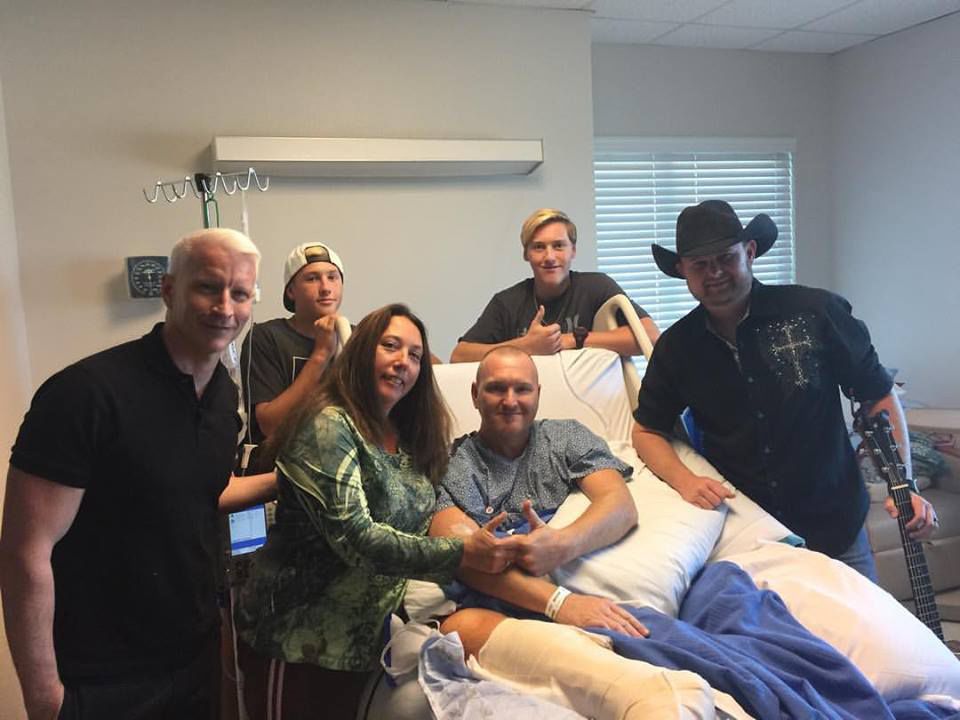 Desert Hills Firefighter Kurt Fowler is seen from his hospital bed recovering from being shot in Las Vegas shooting earlier this month. CNN’s Anderson Cooper, far left, and country music star Matt Farris, far right, are among those wishing him well in his recovery.

Desert Hills Firefighter Kurt Fowler and his wife, Trina Fowler, remain in their Lake Havasu City home as Fowler recovers from a wound received during this month’s mass shooting in Las Vegas.

Desert Hills Firefighter Kurt Fowler is seen from his hospital bed recovering from being shot in Las Vegas shooting earlier this month. CNN’s Anderson Cooper, far left, and country music star Matt Farris, far right, are among those wishing him well in his recovery.

October 1, 2017, is a day that will never be forgotten in the lives of millions, including Lake Havasu City’s very own Kurt Fowler, Desert Hills Fire District firefighter. Almost two years later, Fowler is back at work and closing one chapter of his recovery after being shot in the leg while protecting his wife during the mass shooting at the Route 91 Harvest Festival in Las Vegas.

“I would say the physical healing is closed, but the continued emotional journey will last a long time,” Fowler said. “Only a portion of it is closed.”

Family and the support of the community is what got Fowler through, and continues to do so.

“I think the big picture is that good always overcomes evil, and there are so many good people in the world,” Fowler said. “Without all of those good people, we wouldn’t be able to be where we’re at right now.”

There were several businesses, individuals and fundraisers — too many to list and thank one at a time, Kurt said. “And the amazing doctors at Sunrise [Hospital] — they really put me back together.”

“We definitely gained friendships with people that we would have never met if it wasn’t for meeting them through this tragedy,” his wife, Trina Fowler, said.

Kurt thinks his fellow firefighters were surprised to hear that he was coming back.

“We’ve definitely come a long way for sure,” Trina said. “Whereas we didn’t know if he’d ever walk again, now he just has a limp and swelling that I think he’ll always have in his leg. Physically, now he can do stuff with the kids again.”

The family is now working on being able to hike and camp again, and all of the things they weren’t sure if they would be able to do as a family ever again.

“You follow the doctor’s orders and do the therapy and everything that you’re supposed to do, and prayer — miracles happen… We didn’t know, but now here we are,” Trina said. “So it’s pretty amazing.”

Kurt’s return to work brought relief to the family financially, as well. “It was definitely peace of mind that life would kind of go back to whatever the new normal is for us,” Trina said.

He has been back at the station for three weeks now, and he said that while it’s exciting, it’s also been an adjustment. “It’s really rough to be at work because I’m used to being at home all the time and being able to be here for all three of my children and my wife every day,” Kurt said.

Trina said, “With him going to work, it’s super exciting and it is peace of mind. But at the same time, it’s two nights a week that he’s not here with us. It’s a comfort, having him here.”

The road to recovery has been anything but easy and is far from over for the Fowler family.

“I think the emotional part is definitely rough. That’s something that I don’t think that anybody will ever truly understand except the ones that are there because our lives will always be different,” Trina said.

Even running errands or daily activities have been transformed by the tragedy, and watching the news lately doesn’t help either.

“None of that is even remotely the same,” Trina said. “He had a rough time just the other day in the grocery store, and now we’re just seeing more shootings, constantly. Those are huge setbacks that kind of put you right back to where you were a year and a half ago, which is a huge bummer.”

But to still see excitement from the community about Kurt’s return to work almost two years later is heartwarming for the family.

“It brings out the good in the community,” Kurt’s daughter, Timori Fowler, said.

Trina added, “Which we need, for sure… If people see more good, maybe there would be a little less bad.”

Vegas isn’t always a city of sin — it’s a city of love, even in the face of tragedy. It was …

Desert Hills firefighter among the wounded

Our View: 1 year later, answers are few, but healing is evident

A year ago today, terrorism came home. Nobody knows why Stephen Paddock fired from his Manda…