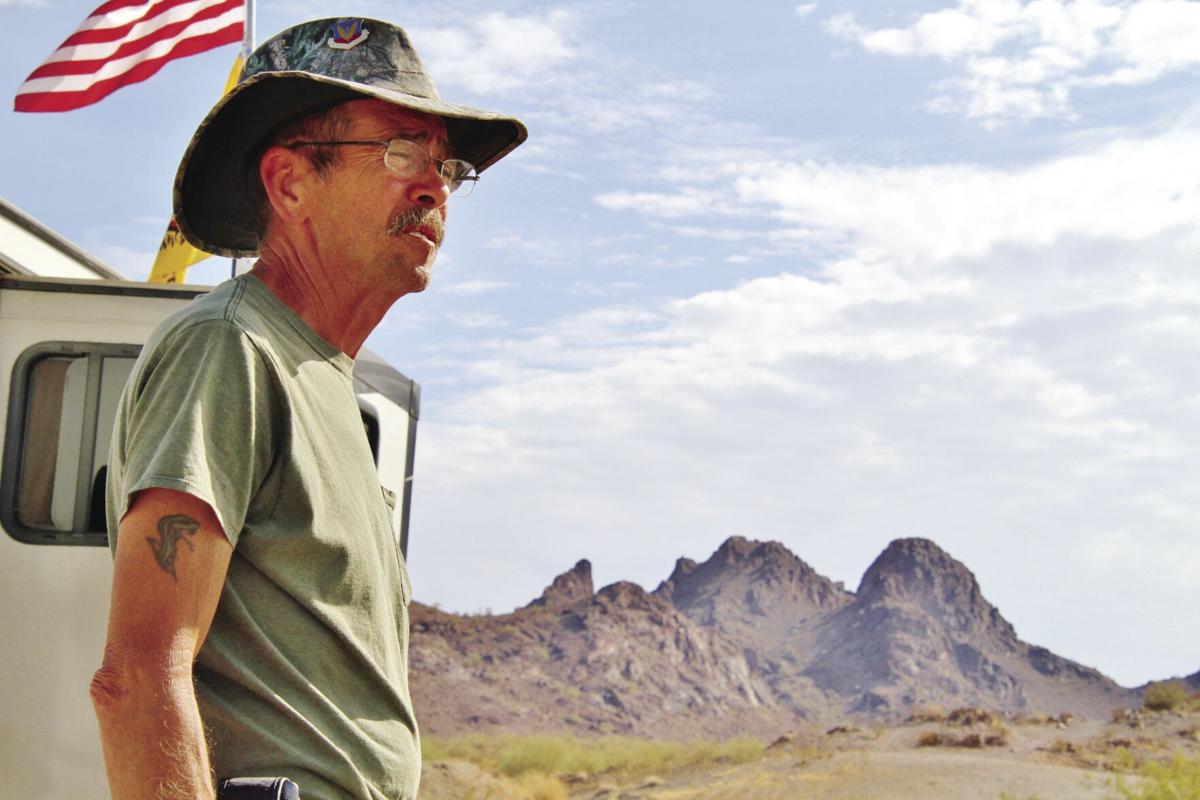 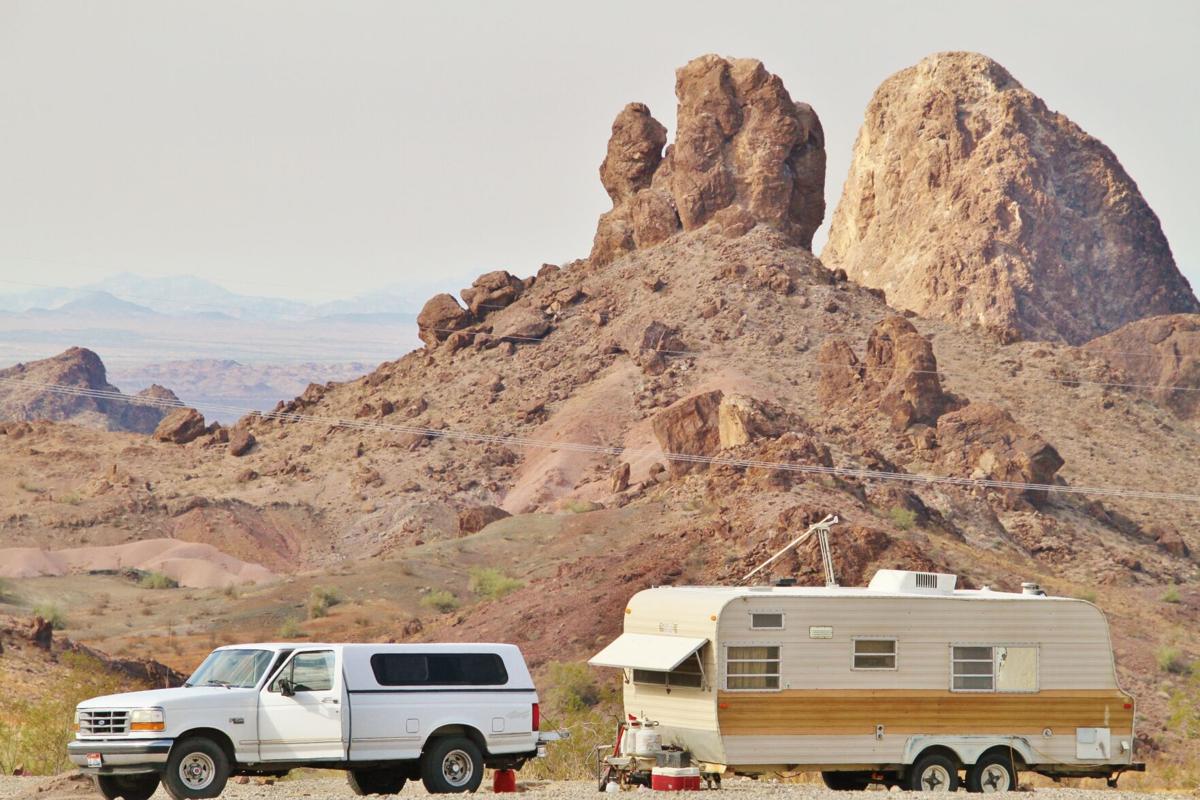 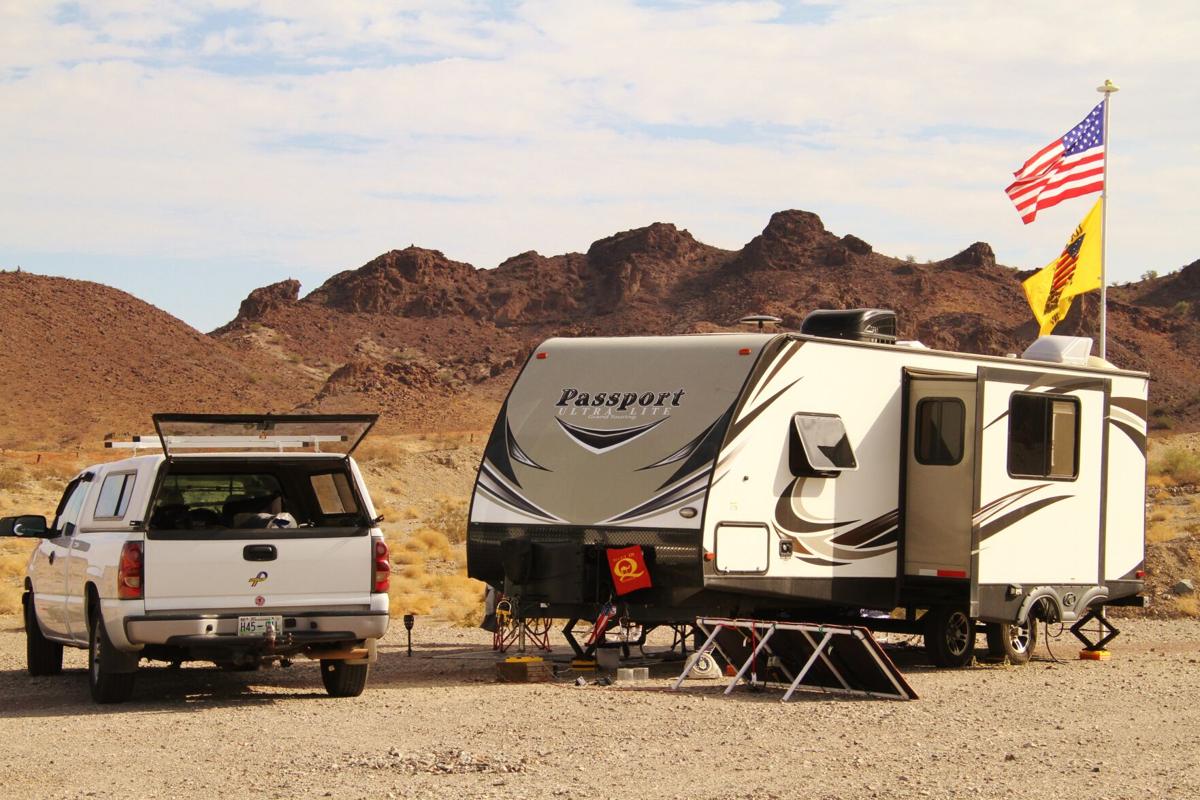 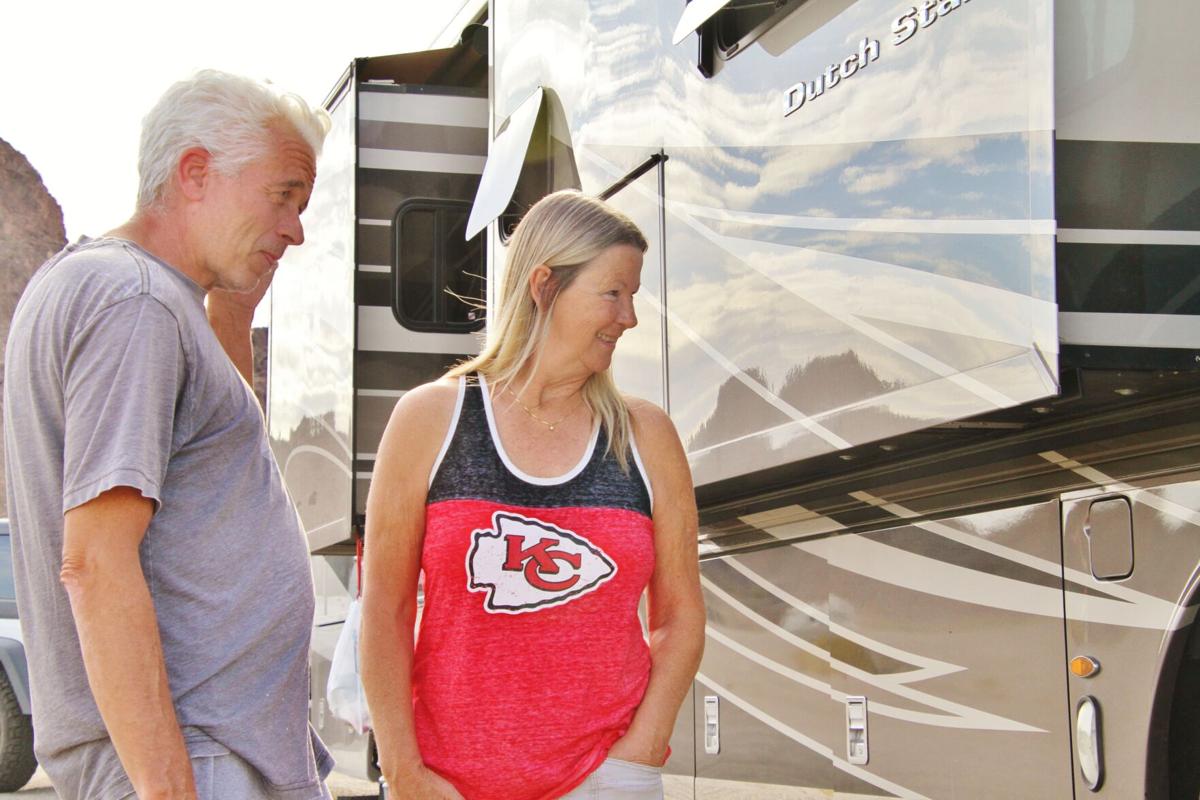 Vincent and Linda Dimapoli are among a growing number of full-time travelers, known as “nomads,” throughout the Southwest. The couple sold their home almost four years ago, and have been touring the country ever since.

Vincent and Linda Dimapoli are among a growing number of full-time travelers, known as “nomads,” throughout the Southwest. The couple sold their home almost four years ago, and have been touring the country ever since.

A light breeze swept across the desert hardpan three miles north of Lake Havasu City Thursday morning, as Janet Jacoby’s dog barked within her small white camper. The vehicle had been her home for the past two years — and the jagged mountain ranges of Mohave County loomed over her back yard.

“For me, it was coming home every night,” Jacoby said. “I was sitting in my three-room house, watching videos, and I started to think: ‘There’s got to be more than this’.”

Until 2019, Jacoby owned a home and held a full-time job. Now she’s among a growing population of long-term travelers — a wandering tribe connected only by the promise of fulfilment, and a desire for freedom.

According to the national RV Industry Association, more than 22 million households own a recreational vehicle — and that number surged during the coronavirus pandemic last year. But only 1.5% of all recreational vehicle owners have fully adopted their RVs as traveling homes.

They call themselves nomads, and their search has led them to the Lake Havasu region this October. But historically, their travels haven’t been without conflict with local residents.

“My kids are grown, and I’m divorced,” Jacoby said. “I watched videos about traveling the country, and living in an RV full-time. I decided that I could do it. I sold my home and most of my possessions. After eight months of homework, I took off.”

The decision to pull up her roots has been rewarded, she says, in the people she’s met and the places she’s seen on her journeys. Jacoby set up her camper at the BLM-designated camping area north of Lake Havasu City about a week ago. Surrounded by rugged desert landscape, she’s only one member of a temporary community of fellow travelers.

“It’s the comradery of the people you meet, and the freedom,” Jacoby said. “And I have a new backyard every place I stop. I lived in Chandler when I was in high school … I love Arizona, and I have ties here.”

But traveling for years - or even for the rest of her life - can have its challenges.

“I worry about my rig falling apart,” Jacoby said. “Mechanical issues worry me, or not being able to find a spot.”

But of Jacoby’s fears, her own safety isn’t one of them.

“I can tell you three things about safety,” Jacoby said. “The majority of people who do this are just like me - They keep to themselves. But you should listen to your instincts. If it doesn’t feel right, find a new spot. Aside from that, most of us have guns. Almost everyone who does this has a gun - being from Texas, you know I’VE got a gun.”

Life on the road

Hardened dust and sand crunched beneath Rich LaBeau’s feet as his eyes scanned the surrounding mountainside. Five years ago, he might have survived prostate cancer.

He doesn’t know yet.

The cancer cells are still there, he says. But until the cancer decides for certain, LaBeau has a reprieve - and he intends to enjoy it. LaBeau lit a cigarette as he spoke Thursday morning.

“My wife and I thought I was going to die,” LaBeau said. “We thought, ‘that’s it’. Traveling was something we thought about doing for a long time. And after most of the cancer was removed, we decided: ‘To hell with it. Let’s just go’.”

LaBeau has visited the Lake Havasu area several times throughout his travels, and continues to enjoy it.

“We’ve traveled the country,” LaBeau said. “We try to go where it’s 70 degrees every year. (Havasu) is perfect. It’s good for hiking and exploring. It’s nice and quiet.”

LaBeau once owned a carpentry business, until the Recession. When he was forced to close his business, he tried several more occupations before his eventual retirement. Now, he describes himself as a nomad - and he has no intention of being anything else.

“It was a little scary at first,” LaBeau said. “But when I got used to traveling so much, it was perfect for me. I wouldn’t give it up for anything. I love this lifestyle … everyone who gets the chance to do this should do it. There’s so much around the country to see.”

LaBeau and his wife tend to avoid larger cities in their travels, unless necessary. When they have no choice, they often do so at times when they know traffic will be least congested. And LaBeau favors staying on public lands, surrounded by like-minded travelers..

“It’s usually the nomads who come out here,” LaBeau said. “It’s a lot safer being around nomads than in RV parks. Out here, we all watch out for each other. And we’ve never had a problem with safety with this kind of life.”

But according to LaBeau, recreational short-term campers and weekend warriors can pose a larger issue for federal land management officials as well as long-term campers.

“We’re usually the ones who clean up the trash others leave behind,” LaBeau said. “Last year we were cleaning out washes that were loaded with trash. We’ve picked up tires and bags and bags of stuff.”

But historically, not all long-term campers have shown as much consideration in the Havasu area. Two years ago, the Desert Hills area of Fathom Drive petitioned Mohave County officials after hundreds of long-term campers took residence on State Trust land adjacent to London Bridge Road.

For months, Fathom Drive homeowners complained of campers overstaying the time permitted to camp on state land, as dictated permits obtained from the Arizona State Land Department. Complaints also included abandoned garbage throughout the area - including, in one instance, an entire recreational vehicle that had been left to rust in the desert.

According to LaBeau, the area’s nomads and full-time RV motorists have no intention of damaging - or diminishing - the beauty of their surroundings.

“Nomads want to treat these places the way we’d treat our home. We don’t want trash and cigarettes strewn all over our yard,” LaBeau said. “We try to leave places better than when we got there.”

‘Until we can’t drive anymore’

Former California business owners Linda and Vince Dimapoli sold their home, packed up what belongings they didn’t sell, and took to the nation’s highways and byways almost four years ago. And they haven’t stopped traveling since.

“It started when we rented an RV for our kid’s wedding,” Linda said. “After the trip, we thought to ourselves, ‘why are we still living in California’? Everything was nuts in California. We sold our house, bought our RV, and people thought we were crazy.”

The couple arrived in the Havasu area this week, and it’s one of their favorite spots to visit.

“We’re seeing different stuff all the time,” Linda said. “We expected the place to be more full in October … It’s a beautiful spot to set up.”

Vince says he and his wife have spent the past four years finding comfortable weather and beautiful scenery throughout the U.S.

“We love the freedom we have,” he said. “Part of the beauty of this is that we can find new places to travel to … it’s like being on permanent vacation.”

Vince says he and his wife will likely remain in the Havasu area for several more months as they apply repairs to their vehicle and prepare for future adventures ahead.

“If something broke in the rig, it would be much harder to fix while we’re living in it,” he said.

How long those adventures will last, however, remains to be seen.

“One day we might buy a house up north or in the south,” Vince said. “We’ll retire in Arizona or Texas when we stop … but we’ll probably keep driving until we can’t drive anymore.”

Love $eeing those RV'$ heading back to town.

Most of our winter residents of 'Camp Tightwad South and North' are boondocking for one reason and one reason only...

Havasu is turning into a tent city. A bunch of old RVs along the road side. Trash everywhere. Not good

Is that all you ever do: complain? Go back to Scottsdale if you are so unhappy here.

1502 - Personally, I'd rather look at revenue generating Storage Facilities!

After a 19-month freeze, the United States is planning to open up its land borders…

Bashas' announced it will give away free donuts on Monday.