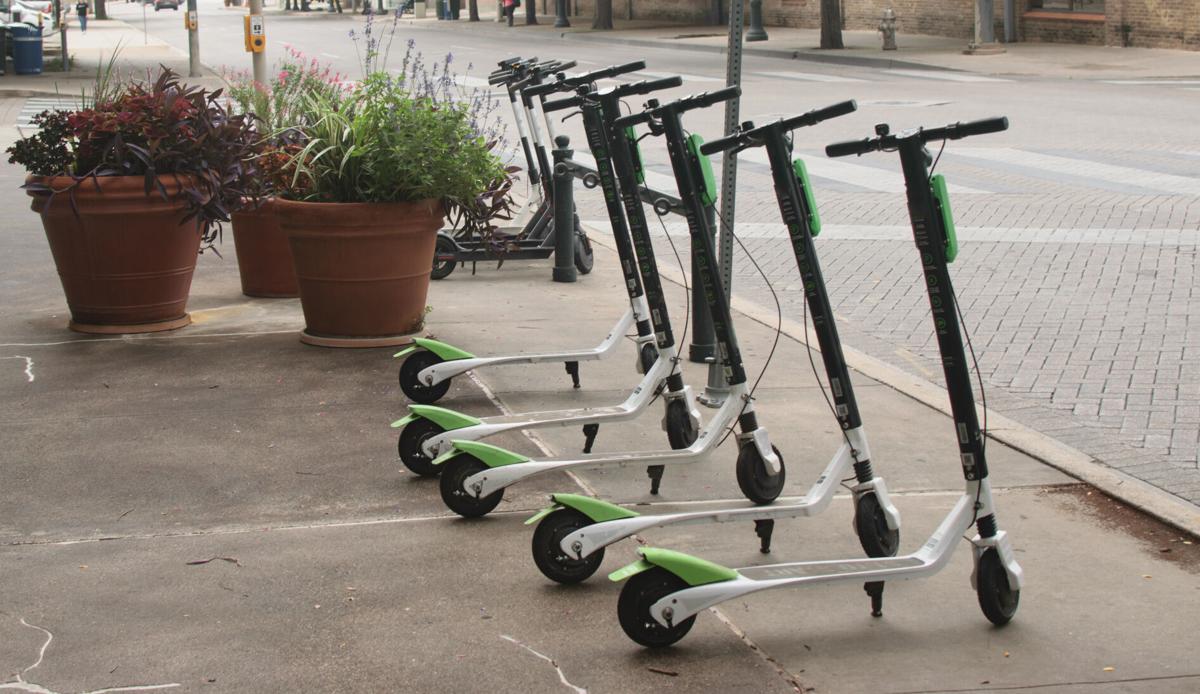 Citizens may notice more electric scooters parked in public rights of way or cruising along in bike lanes and on multi-use paths in the months ahead.

City Manager Jess Knusdon said Lake Havasu City was recently approached by electric scooter company Bird, which is exploring the possibility of starting an electric stand up scooter sharing program here in Havasu. The City Council will hold a public hearing today about whether to allow an e-scooter pilot program that would temporarily allow such a scooter sharing system to operate in the city for six months, or until the city adopts an ordinance to regulate scooter sharing systems.

Although the resolution being considered by the council would establish the parameters of a scooter sharing pilot program, Knudson said discussions with Bird are still ongoing. He said details such as where specifically the scooter sharing program would be allowed to operate and when the six-month trial period would begin would need to come back to council for approval if Bird ultimately elects to move forward in Havasu and seeks a temporary operating permit.

Knudson said the e-scooter pilot program resolution being considered today would establish a set of non-negotiable ground rules that any operator would have to follow in order to set up a pilot scooter sharing program.

“We just want to make sure that they as a company can be successful but, more so, the concern for the city is that we want to make sure that our residents don’t see it as a nuisance,” Knudson said. “So what we are trying to get ahead of is examples and situations where you have the scooters laying in the street, blocking traffic, in front of different businesses, or people being disturbed by the scooters in the parks or other areas.”

The resolution also spells out what areas the scooters could be ridden in and where they can be parked, as well as where riding and parking is prohibited. The company would be responsible for responding to complaints of improperly parked or inoperable scooters within two hours.

If approved, the operator would pay the city $1,000 to operate under the pilot program, and an additional 10 cents per ride within the city.

Knudson said he doesn’t have any idea whether Havasu is a good fit for a scooter sharing program or not, or how much money 10 cents per ride would amount too for Havasu.

“There are a lot of challenges with the layout of Havasu when it comes to this type of program,” he said. “So time will tell if it is something that would be successful or not. I have no expectation.”

In order to use Bird’s scooter sharing system riders must first download the Bird app.

Scooters available to ride are marked on the application’s map and once the rider locates an available scooter they scan the attached QR code or enter a digital code into the app to unlock it and start riding.

The map on the app will show the rider where they are allowed to go and, according to the FAQ’s on the Bird app, if a rider leaves the operational zone the scooter may slow or stop. The rider must then return to the operational zone in order to continue riding, or to end the ride.

The map on the app also marks areas where riding and parking scooters is prohibited.

According to the app users pay per scooter ride, but the rates change from market to market.

The application’s help section also states that scooters themselves may be restricted to slower speeds in certain areas to comply with local regulations. The Bird app’s help section also says there is an in-app tutorial that is accessible when attempting to ride a scooter that includes the local parking regulations. It also says that some markets have a preferred parking incentive in which a customer receives a credit if they leave their scooter in a “preferred parking zone” marked on the map.

Bird’s website says it has E-Scooter Sharing Systems in place in more than 50 U.S. cities including Phoenix, Tempe, Scottsdale and Tuscon. The website also says the University of Arizona is one of several colleges with a scooter sharing system in place.

· Operator can deploy up to 75 scooters in Havasu under the pilot program.

Too hot in the summer, too cold in the winter and too windy! Dumb idea for an old demographic!

“Scooters can be a big hassle for communities,” said Mayor Cal Sheehy. Really! This is a disaster just waiting to happen. They have tried Segway's, bicycle routes are a disaster, city transit is in the works for a re-do and now e-scooters, just another brain fart. You must be good at something before you take on more problems of public safety, sidewalk clutter, and the knowledge to administer and evaluate program success! Picture a holiday weekend and the downtown traffic, Cars, Trucks, RV's ,boat trailers, scooters for the physically challenged, transit buses and now we add e-scooters!

You have got to be kidding me...I'm speechless. This is just crazy. It's bad enough that we have a million side by sides, motorcycles, people hauling boats, and you want to add a scooter????? The number of accidents has increased and Knudsen wants to add scooters. The town is a highway death traps.

Ok, so I've used these in other parts of our country. Would I do it in this city? Heck no. Vehicle drivers hit stationary objects in this city on a regular basis, now you want to offer more (and smaller to see) moving targets to hit? This city needs to get back to the basics of functional driving capabilities or start pulling licenses. You have to drive defensively at any stop sign intersection or especially in a store parking lot. Scooters weaving around will just become more unseen objects in populated areas.

Earlier this week, the Mohave County Health Department ruled that deliveries will …

Man wanted for sexual conduct with minor arrested in Havasu