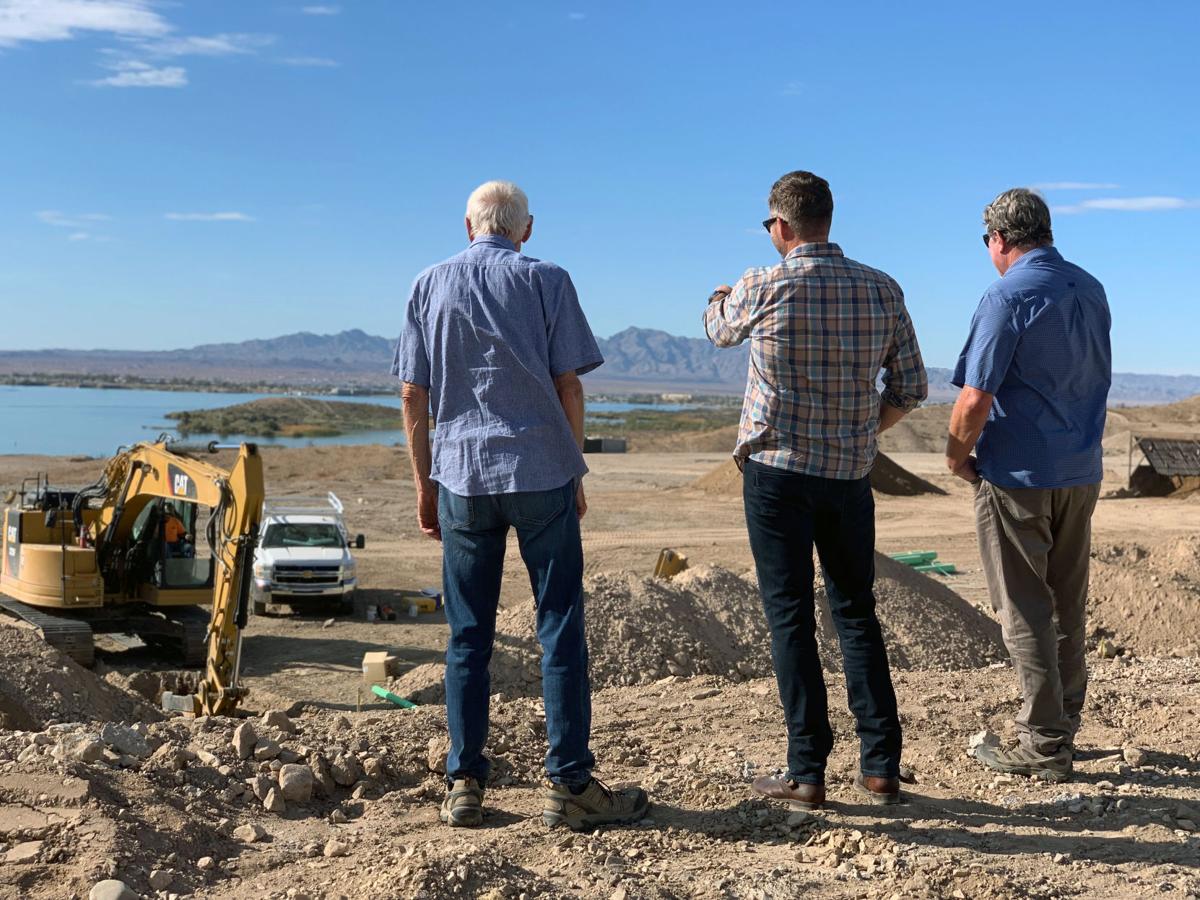 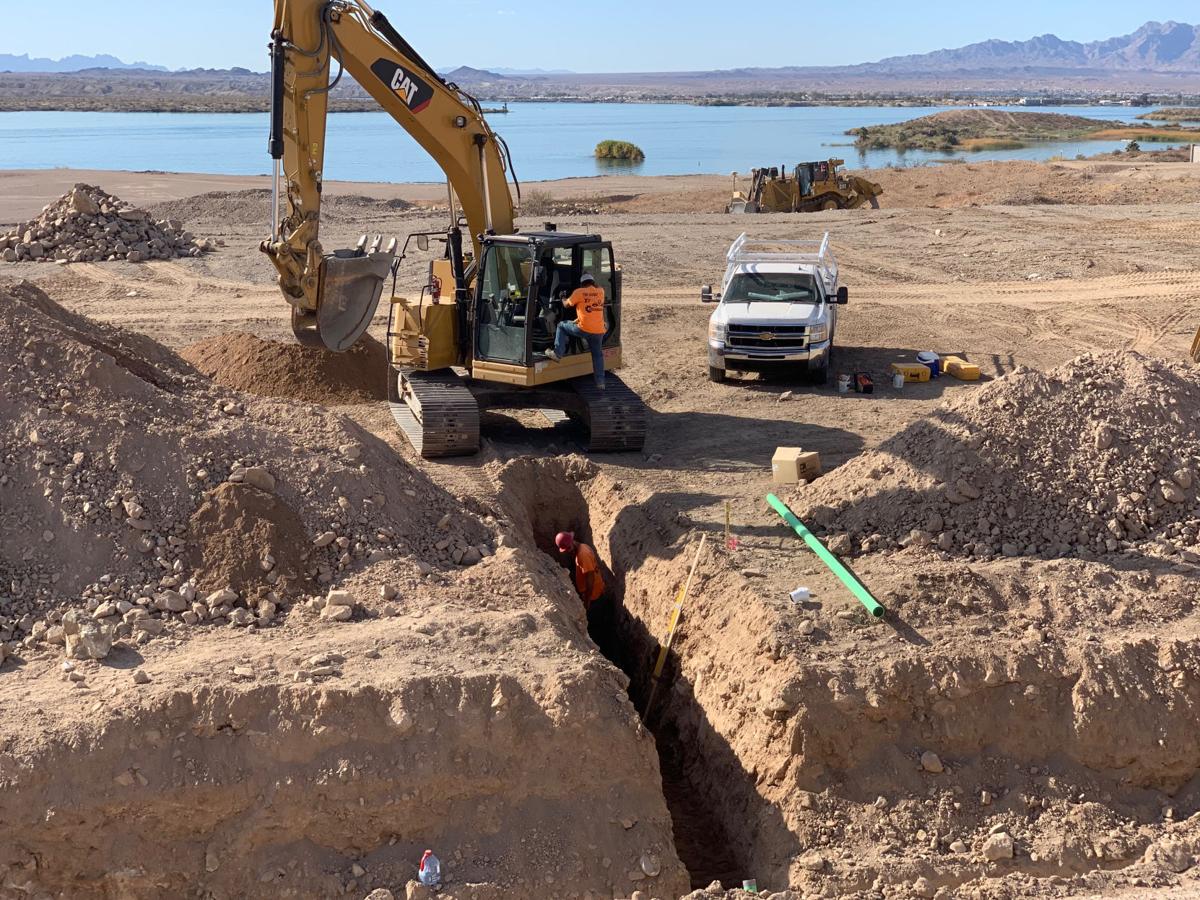 Crews dig the trenches necessary to install water and sewer infrastructure underneath a future street.

Crews dig the trenches necessary to install water and sewer infrastructure underneath a future street.

When highway travelers pass by the inactive intersection that leads into the Havasu Riviera project site, a tiny glance is granted, and it doesn’t look like much has changed since things finally got moving again in August.

But behind the hills and down the unopened road, a different story is unfolding. Dirt is definitely moving across the project’s 550+ acres, and the developers couldn’t be more excited to get back to work.

Jim Komick of Komick Enterprises said that after a long “miserable” delay full of unknowns and unanswered questions, “it’s all good and all on track right now.”

“We’ve put it behind us, and we seem to have a much, much better working relationship (with Arizona State Parks),” Komick said. “Everybody seems to be gung-ho on it, and we’re definitely gung-ho on it. I mean, we’ve waited long enough.”

Since the loan consent agreement was signed in August, the project has been assigned a project manager at Arizona State Parks and Trails and the partners hold weekly phone calls with them to work through the remaining details of the project and ensuring everything is up to state code and standards, he said.

“They have a review process that we’re going through over the next couple of months to get everything reviewed and approved so that we’re back under construction,” Mychal Gorden of Desert Land Group said.

While you won’t see any sticks in the ground quite yet, all of the initial steps for construction are underway, he says.

The road is completed, up to the State Parks portion of the land, where it awaits connection with the launch ramp already sitting in the water. “All of the infrastructure — the water, the sewer, all the conduits for dry utilities are all in the ground,” Gorden said. The intersection itself is also completed, and energizing it with power is one of the next steps in the process, now that UniSource Energy Services has been paid the necessary deposits.

“Those payments have all been made, both for power offsite to get to the intersection as well as to pay for power to get all the way down to the marina and to the subdivision,” Gorden said. Getting power will be ongoing over the next few months as materials are ordered and the work gets scheduled. The intersection won’t be opened until there’s “actually something to go to,” Gorden said, when phase one of the project is complete.

The first phase is estimated to be completed by August 15, 2020, according to the developers. Marina construction is expected to start on March 1.

With its completion, the road will become open to the public, leading visitors past construction on future site projects and down to the state park entrance.

After checking in and paying for park use, park patrons will continue down the road into a large parking lot and six-lane launch ramp. Bathrooms and a portion of docks will also be completed at its initial opening.

The next phase will include the waterfront restaurant, marina store, remaining docks, fuel station and day use areas.

Dirt is moving on other areas of the project site as well. Construction crews are working to install underground water and sewer infrastructure in order to complete the almost 80 lots that will ultimately become a neighborhood dubbed Marina View at Havasu Riviera.

The developers are hoping to finish the neighborhood by the spring so they can “show it off” to the public and start selling homes. Two more neighborhoods, currently undergoing grading, will also branch off of the main road to create over 200 future homes, with differing vantage points of the lake, mountains and surrounding desert.

Still no power for stoplight at Havasu Riviera

Although progress at Havasu Riviera remains hard to gauge for the average citizen, taking place behind rolling desert hills and down an unopen…

Waiting for 2007 all over again then this might actually be worth it.

The tax payer $5 million investment for a private marina, private development. Hopefully the new mayor and city manager will make better decisions in the future.