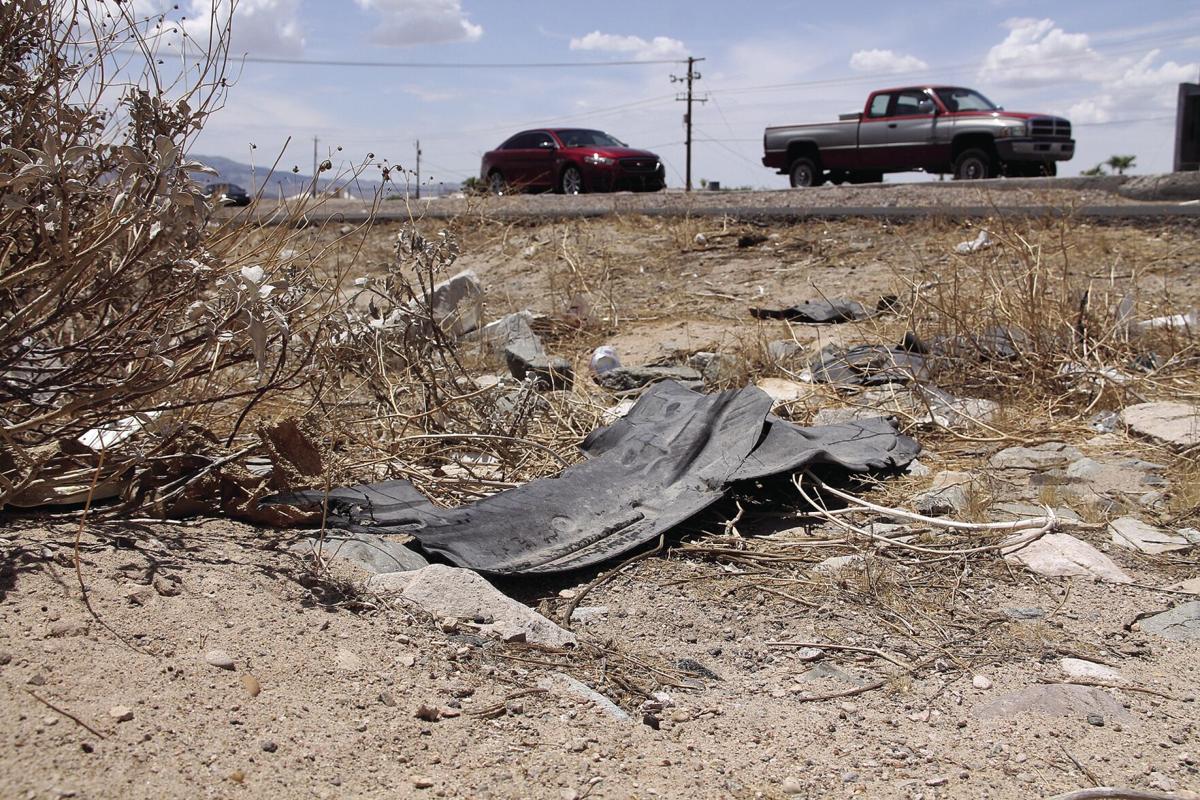 Roadside trash is collecting at a higher rate along State Route 95 through Lake Havasu City in the past year. Work crews haven’t been available to do the work as much in the past year due to the pandemic. 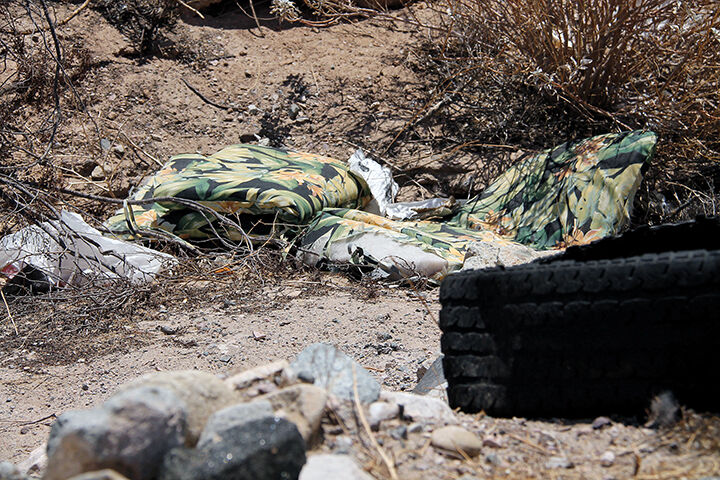 Roadside trash is collecting at a higher rate along State Route 95 through Lake Havasu City in the past year. Work crews haven’t been available to do the work as much in the past year due to the pandemic.

Plastic bags, cardboard boxes, tires and countless cigarette butts strewn along State Route 95 through Lake Havasu City have unfortunately become a part of the scenery along the highway over the past year.

The Arizona Department of Transportation, which is responsible for keeping the state highways clean and in good condition, has been dealing with a significant reduction in manpower for its normal cleanup efforts during the pandemic. It isn’t just Havasu, ADOT Assistant Communications Director Doug Nick said many areas in Arizona are experiencing similar problems – calling it a statewide issue.

“The condition of Highway 95 is worsening and it is getting to a point where something needs to be done about it now,” Knudson said. “We are receiving a number of complaints — and rightfully so — that the trash along SR-95 has grown to unacceptable levels. Whether it is on the north side or the south side, as our residents already know, the accumulation of trash in those areas is growing and we need a plan to clean it up.”

ADOT has continued to conduct cleanup operations along state highways throughout the pandemic, but Nick said ADOT maintenance crews’ first priority is driver and highway safety.

“They clean up trash and debris as often as possible,” Nick said. “However, their primary job is [to perform] tasks such as pavement resurfacing and crack repair, guardrail and fence repair, and other tasks directly related to safety.”

In a typical year ADOT crews’ trash removal efforts would be supplemented by inmate work crews and volunteers through the state’s Adopt a Highway program. But the Arizona Department of Corrections, Rehabilitation, and Reentry suspended all outside work programs – including the highway cleanups – as a safety precaution in March 2020 and the number of volunteers cleaning along the highway plummeted during the pandemic.

As a result, the amount of litter collected fell in many districts as well.

The Northwest District - which includes most of Mohave County including all of the Tri-Cities, Yavapai County, and parts of La Paz and Maricopa counties including Wickenburg – only picked up about half as much litter in 2020 as it did in 2019. Nick said the Northwest District collected a total of 54 tons of trash along state highways last year, after collecting 108 tons in 2019. Nick said ADOT doesn’t keep a running total of how much trash it collects, so there is no way to tell how much has been gathered off the highway so far in 2021.

“ADOT crews do their best to remove litter and debris on a consistent basis. These men and women are cleaning up their own communities,” Nick said. “ADOT and volunteer groups are part of the solution and shouldn’t bear any blame for the behavior of others who actually do the littering. The most important factor here is the behavior of motorists. The simple answer is not to litter in the first place. Litter is unsightly, unhealthy and unsafe.”

Nick also pointed out that there are some types of litter that ADOT crews, volunteers, and inmate laborers are not allowed to pick up due to safety concerns – including syringes, dirty diapers, and or bottles filled with urine. He said all of those types of litters are much too common along state highways.

Knudson said the highway through Havasu needs regular and ongoing cleanups rather than a one-time event. He said because it is a state highway it should be the state that takes the lead on cleaning up along the side of the road. He said the city is responsible for cleaning and repairing city streets, the county takes care of county roads, and the state is supposed to pay to clean up along state highways.

“We make sure that there is routine maintenance and clean ups on our roadways and our expectation is the state would do the same on Highway 95,” Knudson said. “It is extremely visible to those that travel throughout the community, come to Havasu on vacation, or pass through Havasu. So it is obviously very important that Highway 95 in maintained in a way that is acceptable.”

Knudson said he has reached out and had some initial conversations with ADOT about ways the city could potentially partner with, or assist the state with cleanups. But the city is hesitant to spend its own money to clean up.

“There are already taxes that are being paid to the state for that clean up, so using city funds for this is not the proper approach,” Knudson said. “We can’t pass that responsibility on to the city as a whole, but we are willing to help and partner where we can.”

Through an Intergovernmental Agreement work program with the Department of Corrections, ADOT has been able to use inmate work crews to boost cleanup efforts along Arizona’s highways in years past. Knudson said at the city’s request several years ago inmate crews have been visiting SR-95 through Havasu at least three times per year.

Knudson said those efforts helped out a lot, but when the covid-19 pandemic started kicking up throughout the state in March 2020 the Department of Corrections suspended all of its inmate work programs as a safety precaution.

Nick said it will be up to the Department of Corrections to determine when and how to make its inmate laborers available for highway cleanup again. As of Monday, he said he was not aware of any timetable for when that might occur.

For its part, the Department of Corrections has already started resuming more normal operations this summer. The department announced on July 9 that it resumed all of its Intergovernmental Agreement work programs – which includes highway cleanup crews. A member of the department’s media relations team told Today’s News-Herald on Tuesday that they believe all or most of the department’s inmate work crews have returned to work, but they were not able to confirm that crews had returned to work along state highways by the end of the day Tuesday.

Whenever prison crews return to work along state highways, Nick said ADOT expects the extra hands to be a big help in areas where the crews are utilized – like Lake Havasu City.

“In those areas where such crews have been used in the past, their absence has been noticeable with the increase in litter,” Nick said. “While we can’t specifically quantify a number, there’s no question that the added inmate personnel will once again be a very important part of the work to clean up roadside trash.”

Nick said aside from the loss of inmate labor, the biggest challenge ADOT has faced keeping highways clean during the pandemic was a significant reduction in volunteer labor.

“Understandably, fewer volunteers were available during the brunt of the pandemic, though we never suspended cleanup operations and have always followed public health guidelines,” he said.

According to ADOT’s maps, different volunteer groups have adopted sections of State Route 95 all the way through town - in two mile increments - starting just north of Cattail Cove State Park extending north to within two miles of the SR-95 junction with I-40.

Mayor and city leaders don't have LHPD enforce covered load law. Don't blame the state for the mess you created. Mayor Sheehy told me he'd take care of this before he was elected. He hasn't.

Havasu people do not even clean the trash out of their own yards. Just drive around and take a look.

So, what is the mindset of litter bugs? Lighted cigarette butts, drink containers, etc.?

Once again the city and state realize there is an issue, but no one wants to step up. Just point flingers. The city states they have received all this extra funds from taxes, federal relief, etc. And come up with a plan. Simple. Perhaps they should team up with some volunteers , and we all go out there and address it. Instead of waiting to see what happens.

Much of the trash looks like it may be coming from vehicles handing to the dump without properly covering the load. This includes local contractors! Start ticketing violators!

Didn’t State Rep B get a bill passed for those who received a traffic citation to opt into a work program in lieu of paying a fine?

That would be a great bill to see signed! Also, why not use trustees, or probationers to pick up some of the stuff as part of their community service sentence?

I’ve seen troubled juvenile work crews do this sort of cleanup. It helps reduce their sentencing, however spoken with the officers running such crews and have been informed many of this generation of kids would rather sit and take the longer sentencing then do manual labor. They have to want to.

Driving into Havasu it looks horrible with all the trash and tumble weeds. Drive into Scottsdale and you see a huge difference.

Agree 100% 1502 has never had anything positive to say about Havasu. Please move to Scottsdale.....

His kids won't let him move back in.

You keep bragging about Scottsdale and shaming Havasu, but your kids won't even keep you. I guess their door hits you where God split you pretty fast too. Back to your view of the tumbleweeds.

Property tax rates are set to increase in Mohave County. But the board may not be …