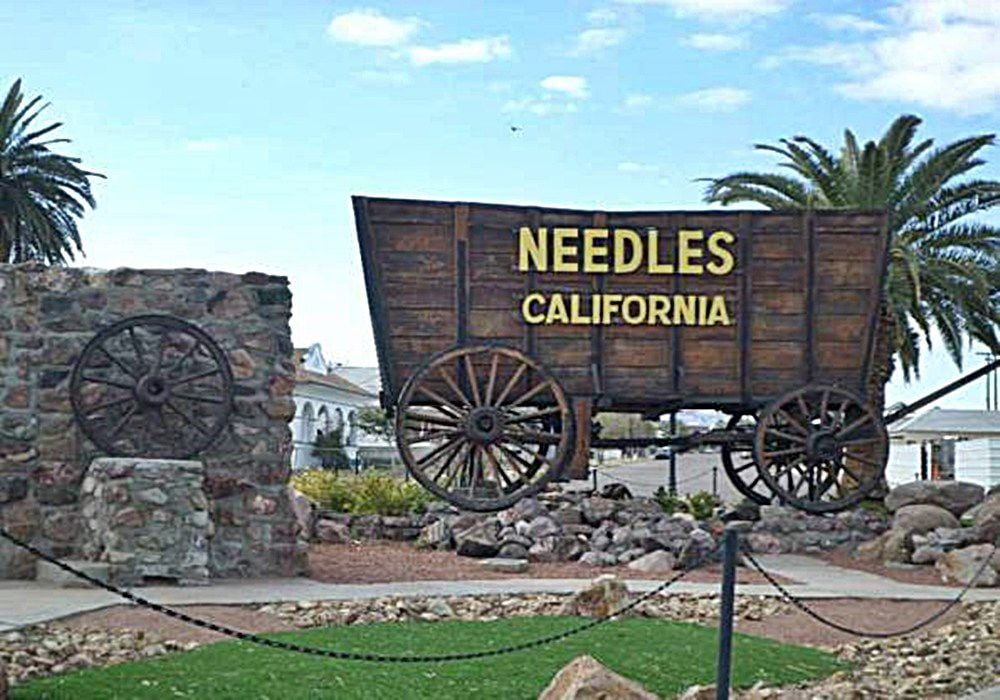 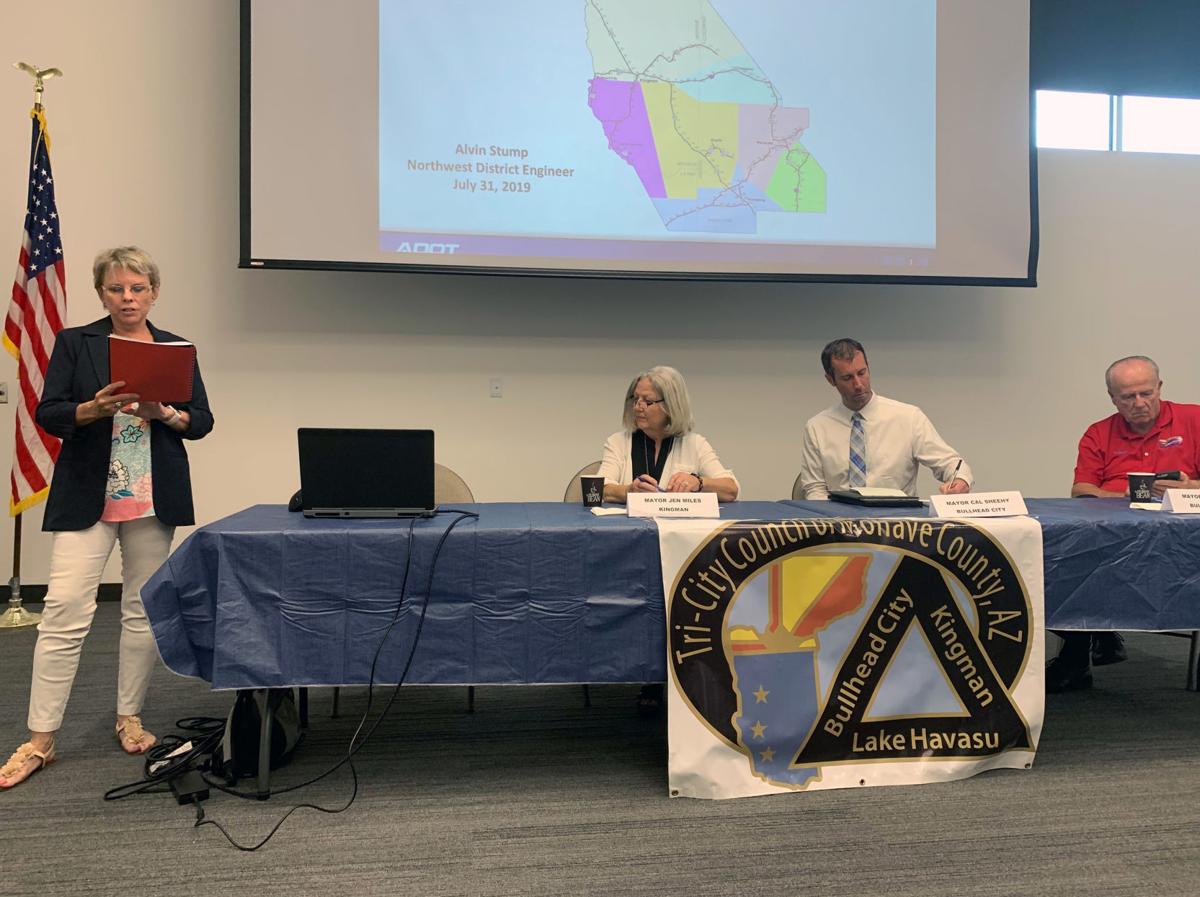 Hildy Angius, Mohave County supervisor for District 2, gives an update on her recent actions during the Tri-City Council meeting on Wednesday in Bullhead City.

Hildy Angius, Mohave County supervisor for District 2, gives an update on her recent actions during the Tri-City Council meeting on Wednesday in Bullhead City.

Needles is officially a Second Amendment Sanctuary City, and Mohave County is looking to show their full support with a resolution.

Mohave County Supervisor Hildy Angius, District 2, submitted a request for board action backing the city of Needles in their declaration as a Second Amendment Sanctuary City, and “their efforts to support the San Bernardino County Sheriff in the exercise of sound discretion to not enforce against any person an unconstitutional firearms and ammunitions law within the city limits,” according to the resolution.

“Needles is growing. It’s going to be the pot capital of California, but as they try to get businesses to come, one of the problems is we’re an open-carry,” Angius said. “If you have a gun in your car and you’re stopped in Needles, you’re in big trouble. So people avoid Needles.”

Instead, people find alternate routes around the city, such as cutting through Golden Shores, she said.

“Needles has to show that people go through it. Plus, they’re more in common with us than they are with California, so I thought that that was pretty bold,” Angius said.

Angius spoke at the Needles City Council meeting when the declaration was being discussed to show her full support.

On Monday, Angius will present the resolution to the Board of Supervisors for a vote. She also wants to send the resolution to Lake Havasu City, Bullhead City and Kingman for their review and consideration of support as well.

Angius hopes that cities throughout the county will “show our neighbor that we support their endeavors to follow the Constitution.”

Needles Mayor Jeff Williams said the community response to the declaration has been mostly positive.

“California doesn’t really think or worry about the outlying cities,” Williams said, which causes some issues for communities like Needles.

Williams said that the city has the support of California Assemblyman Jay Obernolte and California Sen. Shannon Grove so far. Their next step is writing up the legislation with their assistance.

“California needs to stop passing laws that take away our rights,” Williams said, “but I’m not holding my breath.”

NEEDLES -- The City of Needles has declared itself a Second Amendment sanctuary city, a firs…

Mohave is now a “sanctuary” for Second Amendment rights, after a unanimous vote by the Mohave County Board of Supervisors.

Ahh look at that. Needles - that pathetic little town without a grocery store - is nuts and now we know (but have long suspected) Hildy is nuts as well.

Here we have Hwy, the pathetic liberal whiner complaining about Needles.

Not complaining at all, just pointing out that despite Needles not having a grocery store the most important thing for the city council was to make them a sanctuary for gun nuts - who WILL NOT move to Needles.

I got to disagree with you on this one Hwy. As an American citizen, I resent anytime government tries to ignore our Constitution, it's Amendments and Our Bill of Rights. The 2nd Amendment is there to protect the 1st Amendment. Don't tread on our Constitution!

Hwy thinks that it is somehow the responsibility of the City to provide a grocery store. Liberals think that government should provide everything. They also think that government should interpret the Constitution as they see fit, and if that means draconian gun laws, then so be it. Due to his questionable mental abilities, Hwy is probably ineligible to own or possess a firearm anyway.

On, my, yet another personal attack with a lot of untruthful nonsense -"Hwy is probably ineligible to own or possess a firearm anyway." Actually I have quite a few firearms ranging from a Ruger 380 LCP to a Taurus 357 magnum pistol to a Ruger P94 40 cal along with a custom modified 308 Remington 700 sniper rifle and a 12 gauge shotgun. Why do losers insist upon posting lies about me? And nowhere have I ever intimated that the Needless city council "provide" a grocery store. I just find it interesting that they chose to do a grandstanding, utterly useless action instead of working to get a grocery store in their pathetic community. Even gun nuts are not going to move to a s-hole (Trump phrase) that doesn't have a grocery store.

It isn't just liberals attacking our constitutional rights. Our republican (sic) governor is currently proposing to allow guns to be confiscated (without notice) based on a secret warrant and to be able to hold you for 14 days based on a claim of mental illness. Not a proven mental illness, just a claim of mental illness. WTF? Did you see the story in today's edition? "Should guns be taken from people with mental health problems? Arizona governor thinks so" There is a correct way to deal with this issue that doesn't trample on our Constitutional rights. So is the governor a liberal hiding in a conservative party or, is there just no more difference between the political parties?

Over the weekend, two Havasu-based boat manufacturers promoted their products at t…

Candidates are still filing to run for seats on the county’s governing board, but …

With grant funding for the Veterans Treatment Court set to expire within the year,…