GEO Group, a Florida-based company, was picked to manage the state prison in Kingman. Several riots in early July led the state to cancel its contract with a Utah-based private firm that was running the prison. 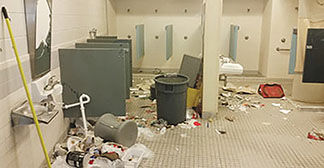 Rioting at Arizona State Prison-Kingman in July forced many inmates to be relocated, as the facility was uninhabitable.

GEO Group, a Florida-based company, was picked to manage the state prison in Kingman. Several riots in early July led the state to cancel its contract with a Utah-based private firm that was running the prison.

Rioting at Arizona State Prison-Kingman in July forced many inmates to be relocated, as the facility was uninhabitable.

Officials with the Arizona Department of Corrections on Thursday will ask a legislative committee to approve the state's purchase of Arizona State Prison-Kingman.

The Arizona Republic reports the purchase from GEO Group, would be for more than $137 million. The state would save about $8 million a year in interest by refinancing and owning the long-troubled prison.

ADOC, points out the Republic, already pays the debt through a per diem on each inmate the for-profit company houses.

The reason for the request is to free up about $2 million for GEO to use to boost salaries in the notoriously underpaid private prison industry. According to the Republic, the GEO Group, which operates a number of prisons globally, made more than $32 million in profit the first quarter of 2016, a 12.5 percent increase over the same quarter a year earlier. The total compensation for CEO George Zoley was $6.6 million for 2015 - a 53 percent increase over the previous year.

If approved, the new deal would take a deep cut of the company's revenue.

While the company has not returned requests for comment, the Republic said the per diem the state pays GEO Group would decrease from more than $60 per inmate per day to about $40.37.

How the company feels might be a mystery, but the Arizona Correctional Peace Officers Association is not happy. The Republic said the 2,000 members have not received a pay increase in nine years. Spokesman Robert Blackmer told the Republic that the money saved in buying the Kingman prison should go to take care of state employees "before we worry about whether private prisons can take care of their staff."

It's a fight that could grow bitter. Gov. Doug Ducey has made it clear he will attempt to expand the private prison industry in Arizona, saying they are more cost-effective than state-run prisons.

Lawmakers, however have refused to commission studies on the subject despite widespread opposition that claims just the opposite. Currently, according to the Republic, 17 percent of the state's nearly 43,000 inmates are in private prisons like the one in Golden Valley.

New Kingman prison operator: ‘We will not cut corners’

Florida firm to take over management of Kingman prison

KINGMAN — The Mohave County Grand Jury has indicted eight inmates, out of hundreds who parti…

The “school-to-prison pipeline” takes on a new meaning this week with a plan proposed by Gov. Doug Ducey to cut property tax in Mohave County,…

Flipping the switch: Festival of Lights kicks off with swim race

Editors Note: This story about the Swim Race Across the Bridgewater Channel contai…