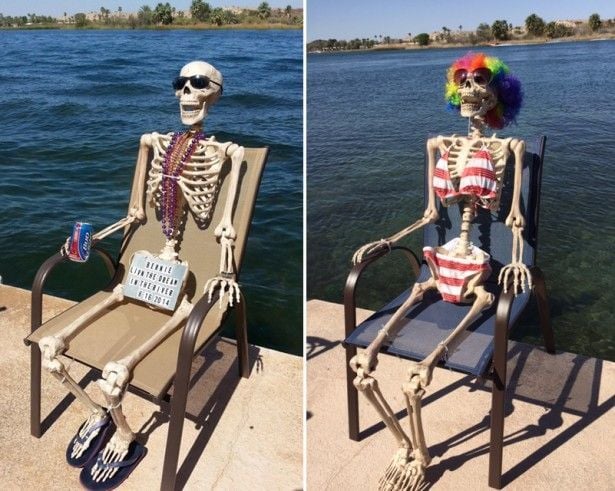 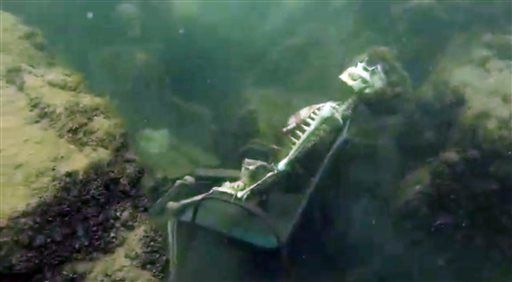 In this frame from video provided by the La Paz Sheriffs' Office, fake skeletons are strategically placed to appear as if they were sitting together with their lawn chairs bound to large rocks in the Colorado River near the Arizona and California border. A man snorkeling came across the two fake skeletons sitting in lawn chairs about 40 feet underwater and reported the skeletons to the La Paz County Sheriff's Office on Monday, May 4, 2015, launching a hunt for what authorities believed could be real bodies. It turned out the skeletons were fake. (AP Photo/La Paz Sheriff's Office)

In this frame from video provided by the La Paz Sheriffs' Office, fake skeletons are strategically placed to appear as if they were sitting together with their lawn chairs bound to large rocks in the Colorado River near the Arizona and California border. A man snorkeling came across the two fake skeletons sitting in lawn chairs about 40 feet underwater and reported the skeletons to the La Paz County Sheriff's Office on Monday, May 4, 2015, launching a hunt for what authorities believed could be real bodies. It turned out the skeletons were fake. (AP Photo/La Paz Sheriff's Office)

PARKER -- Things were a little less grim in the Colorado River this weekend, and Parker residents are dismayed by the fact.

Parker resident Martin Sholl said he took “Bernie” and “Bernadette,” a pair of plastic Halloween skeletons that occupied a local diving area on Friday. The skeletons, purchased in Phoenix by an unidentified couple last year, were a source of national attention this May when they were discovered at the bottom of the river.

The skeletons were placed there for the amusement of divers, tethered to a pair of lawn chairs and dressed in silly clothing. “Bernie” was found with a beer can wired to his bony hand, and “he” held a sign in his lap which read: “Bernie livin’ the dream in the river.”

Sholl says that it was he who discovered the skeletons while scuba diving in May, and he contacted La Paz County Sheriff’s deputies in reference to human remains. Deputies came with divers from the Buckskin Fire Department to investigate and soon discovered the joke.

It was deep, Sholl said in an online statement at ParkerLiveOnline.com. He could make out one of the skeletons, which appeared to be the right size and shape for an adult. After finding the body of a friend in the river last year, he said the discovery mortified him.

“Skeleton tea party,” Sholl said. “It was funny. The next day when my friend called and told me that the chaos I created was on every morning show in the country, I was shocked. It sucked when I found out they didn’t mention me at all.”

According to Sholl, the media’s focus was on La Paz County Deputy Curt Bagby, who led the recovery of the two plastic skeletons and the investigation into their origins.

“The story and video went viral, and still I was ‘the snorkeler,” he said. “I called (a local news agency) and asked why I wasn’t mentioned, and they said Bagby thought I didn’t want to because I was too embarrassed. They had my info – He could have asked me.”

After the skeletons were found in May, Bagby spoke with the Bureau of Reclamation for reassurance that it was safe to return “Bernie and “Bernadette” to the depths. Their resting place was about 45 feet beneath the surface, in a popular diving area, he said. In a Sunday interview.

“It was kind of a difficult situation,” Bagby said. “We’re not supposed to have them in the waterway in the first place, but the public wanted them there. The Bureau of Reclamation didn’t have a problem with it. People still talked about the fact that they were there.”

Over the past five months, the skeletons had become an amusing attraction to recreational divers, and to members of the Buckskin scuba teams during their training in the Colorado River. While the “abduction” of the two skeletons isn’t technically illegal, it’s left Parker without a recent claim to fame.

Ultimately, according to Sholl’s statement, he took the skeletons as a personal slight toward Bagby for withholding his name from the media.

“When you’re dealing with the media (as a law enforcement officer) you can’t assume that people want to be named,” Bagby said.

The two skeletons now reside on Sholl’s balcony in Parker, and Sholl said that he will return them to the river after Halloween.

Chris Chambers, of the Buckskin Fire Department, believes that while “Bernie” and “Bernadette” occupied the bottom of the river, their presence turned the area into a fun feature during the department’s dive training, and made the river bed into a “neat dive spot.”

“Hopefully he’ll give the skeletons to the Buckskin Fire Department, and let us take them back down. They’re a really neat attraction,” Chambers said.

Sholl didn’t technically break any laws in removing the skeletons from the riverbed , and the La Paz County Sheriff’s Department does not intend to pursue the matter further.

CIENEGA SPRINGS, Ariz.  — A man snorkeling in the Colorado River near the Arizona and Califo…

‘Human remains’ in Colorado River revealed to be fake skeletons

Colorado River skeleton mystery solved; no charges will be filed

PARKER -- A husband and wife diving team walk into the sheriff's office.

Well that showed everybody huh?

So sad. Mt. Sholl's 15 minutes of fame ended before it started.

Well now your name will be associated as the giant baby who took his football and went home. There is always one in every crowd, and you sir are it. You should be embarrassed of yourself.

Martin Sholl is a wanky baby!!!!

Unbelievable! This man is the worlds biggest cry baby. I guess we should have a parade for him and place a statue (skeleton) in the park.

Are that shallow of a human that you need to have your name mentioned in the news? Well here's hoping everybody knows your name now and let's you know about it in a big way. How very sad you are