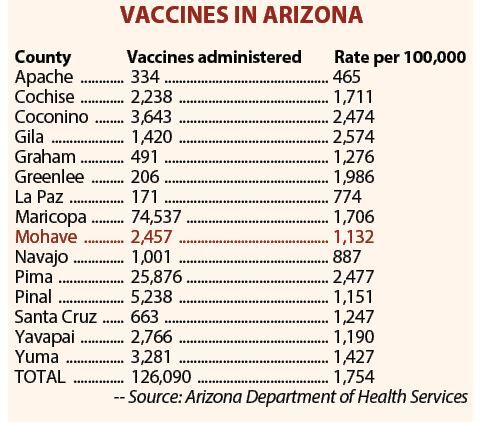 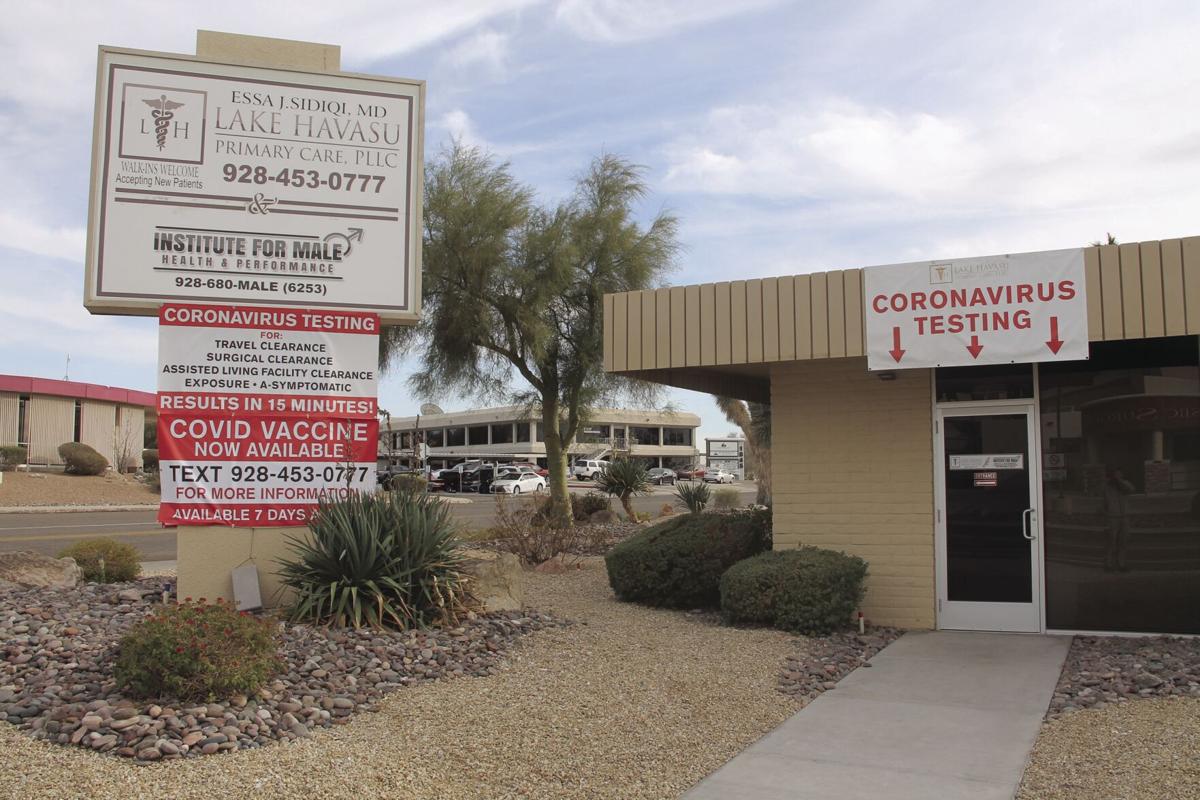 Covid-19 vaccinations are advertised at Lake Havasu Primary Care on the corner of Mesquite Avenue and Civic Center Lane.

Covid-19 vaccinations are advertised at Lake Havasu Primary Care on the corner of Mesquite Avenue and Civic Center Lane.

The pace of vaccine distributions in Lake Havasu City has increased since Mohave County moved into Phase 1B.

Joseph Lopez with Lake Havasu Primary Care said the facility has vaccinated an average of 112 people per day since the vaccine became available to the 1B population this week. Previously, Lopez said Lake Havasu Primary Care had been distributing about 32 doses per day while the county was in Phase 1A, and the facility is capable of distributing about 350 doses of vaccine per day.

“It is opening it up more, which is good,” Lopez said. “At the end of the day the objective is to get those who want to be vaccinated, vaccinated and to get some protection here to the county. So the subcategory has definitely made a big difference. It helps a lot.”

Although the county as a whole has moved into phase 1B distribution, Havasu Regional Medical Center spokesperson Corey Santoriello said the hospital in Havasu is still working on vaccinating the 1A population of the highest-risk frontline workers, support staff, and community partners who interact with patients.

“Currently, we are receiving numerous calls and messages from community members on a daily basis inquiring about the availability of the vaccine to the Phase 1B group,” Santoriello said. “HRMC is hopeful we can accommodate this expanded group of people in the weeks and months ahead as we receive additional shipments of the vaccine and anticipated allocations from the state.”

Those wishing to be vaccinated must contact vaccine providers directly in order to schedule an appointment. There are currently five providers distributing vaccine in Lake Havasu City, and each has its own process for scheduling. The Mohave County Health Department asked that only those who are currently eligible to receive the vaccine call to inquire about an appointment.

Lopez said people can call Lake Havasu Primary Care to be placed on a waiting list for the appropriate distribution phase. People on the waiting list are then contacted when Mohave County begins that particular phase. Lopez said they had about 425 people on the 1B waiting list when they became eligible to be vaccinated.

Since 1B vaccinations began, Lopez said Lake Havasu Primary Care has had a lot more people call to be vaccinated.

“Just last night I scheduled, I think, 117 vaccinations - it is busy,” he said. “People want the vaccination and they are searching for it.”

Although 1B includes several groups of people, the Mohave County Public Health Department announced on Thursday that it is sub-prioritizing distribution within 1B in accordance with guidance from the state. The first subgroup in 1B being vaccinated is protective services occupations - which includes law enforcement, corrections officers, firefighters, and other emergency response staff, and more.

The next 1B subgroup to be vaccinated will be those 75 and older. The health department said it hopes to begin those vaccinations late next week. After the elderly, the next 1B subgroup includes education and childcare workers, followed by essential services/critical industry workers, and finally adults with risk conditions in congregate settings.

Meanwhile, there have been 1,970 new cases in the last 7 days and there have now been 389 deaths in Mohave County. It will be sometime this summer before enough people are vaccinated to stop the virus. We need an enforced mask ordinance, closed indoor dining and drinking until the virus is under control.

If you check the Obituaries today you can see a father and son who both passed away from covid-19 complications just days apart of each other. Families and friends are suffering from this pandemic and the death it brings to our community.

Gov. Doug Ducey on Monday said children should return to Arizona classrooms while …