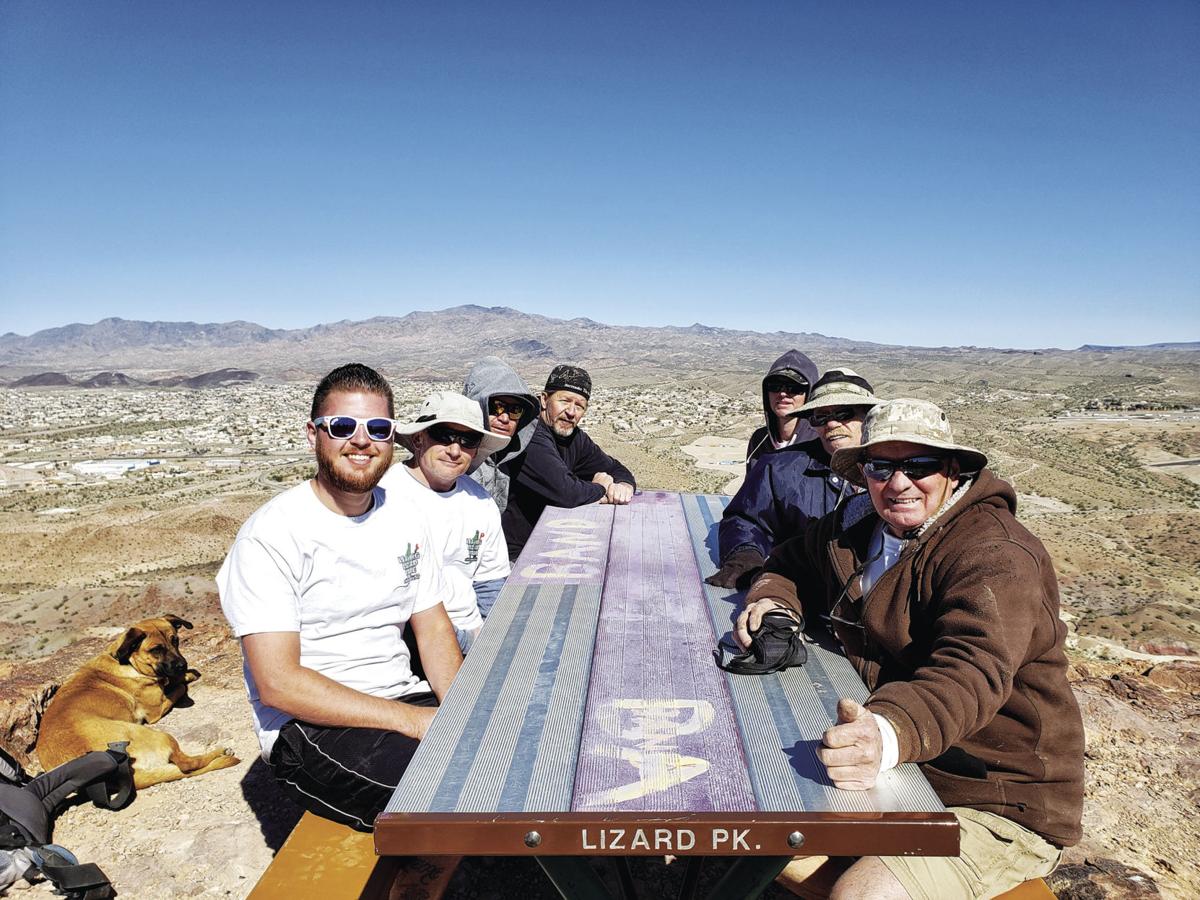 Members of the Leaping Lizards take a seat at the picnic table they refurbished at the top of Lizard Peek. It is adjacent to SARA Park. Tim O’Connor is seated in front on the right side. 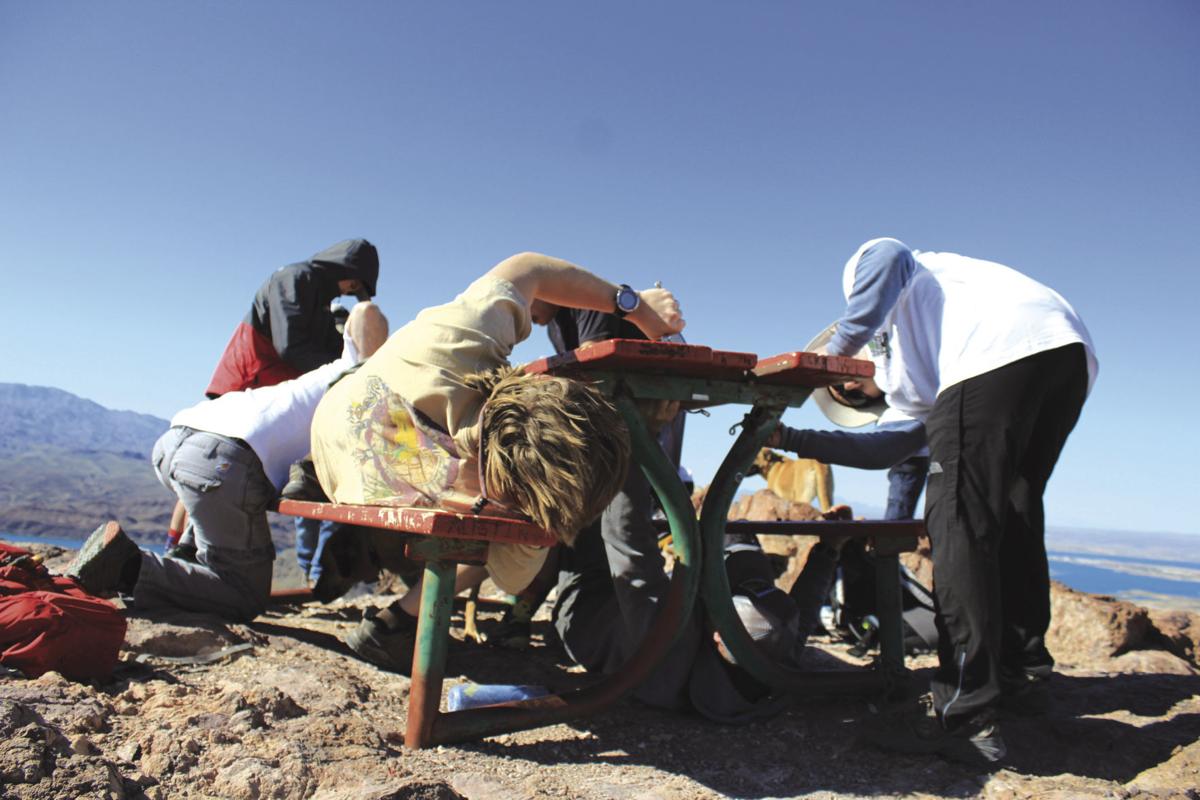 Members of the Leaping Lizards take a seat at the picnic table they refurbished at the top of Lizard Peek. It is adjacent to SARA Park. Tim O’Connor is seated in front on the right side.

When he was on the job Tuesday morning, Tim O’Connor could see people enjoying the fruits of his labor. It pleased him.

On the previous Saturday, O’Connor and nine of his friends – plus two dogs – scaled Lizard Peek to install a new picnic table on a small, flat area of the mountaintop. After an hour-long hike to reach the site, it took the group three hours to get the job done. They loosened the table’s decrepit bolts, pulled off the scarred lumber and installed new planks on the refurbished model.

While he could see the mountaintop from his work site in Lake Havasu City where he was helping to erect a steel building, O’Connor said he can also view the table being used from his south side home.

“Thank Dub Campbell for that,” O’Connor said. “Dub has the old bleachers and donated a few planks so we could fix the table.”

The table was in dire need of replacement. The metal frame was sturdy, but the wooden top and seats were in bad shape. And it wasn’t due to harsh desert conditions.

“That old table had been so disrespected. People carved into it and just about destroyed the top. It was so gouged that it looked like a topographical map,” O’Connor said.

The table had been installed April 29, 1991. O’Connor remembers the date because it was his son’s birthday. The table was old even then – it had previously rested in an Arizona State Park and was being discarded. O’Connor and his friends jumped at the chance to place the free acquisition atop Lizard Peek.

O’Connor and his mountain climbing pals are known in these parts as the Leaping Lizards Tribe. Founded in 1986, its most notable project was lighting up Cupcake Mountain every October with flares. They abandoned the annual lighting a few years ago because the site was being abused.

“We lit up Cupcake for 25 years. But it began to popularize it. When we’d go up there, we’d find cigarette butts and trash. And we found all these rock stacks that people built. We tore all those down, spread the rocks around and cleaned it up. Cupcake is a wilderness area. I don’t know why people want to spoil it,” O’Connor said.

He has every hope that the new table planks at Lizard Peek won’t be vandalized.

“The bleacher planks are strong and durable. I hope everybody enjoys it,” O’Connor said.

The refurbished picnic table atop Lizard Peek is distinctive. The word “band” appears prominently on a few of the table’s planks. The bleacher seats previously resided in Lake Havasu High School’s football stadium before 2018’s major stadium renovation. Those “band” sections were marked to reserve seats for the school’s marching band during events.

Mountain climbers can see the picnic table for themselves if they care to climb Lizard Peek.

Tim O’Connor was part of the group – the Leaping Lizards Tribe – that refurbished the picnic table. He said there are a few other inscriptions on the table.

“Dub Campbell’s name is on it, on the underneath side. There’s no other names, except the initials of everyone who helped with the project. Those are on the bolts,” he said.

It’s a bit of a climb to get to the table, which is on Bureau of Land Management Land between SARA Park and the Colorado River. It takes about an hour to hike to the top, “depending on what kind of shape you’re in and what you’re carrying,” O’Connor noted.

To get there, the trail begins just beyond SARA’s Crack and below the park. O’Connor said the starting point is marked by a brown BLM stake on the right-hand side of the wash. This leads to the Lizard Peek Two-step Trail.

“About halfway up, you’ll hit a skirt. It’s a little tough to negotiate. But if you can climb past that, you’ll reach the top,” he said.

He noted that Lizard Peek is so-named because on the way up, “there’s a 70-foot rock lizard looking at you.”

Two people drowned in the Colorado River on Thursday, according to the Mohave Coun…