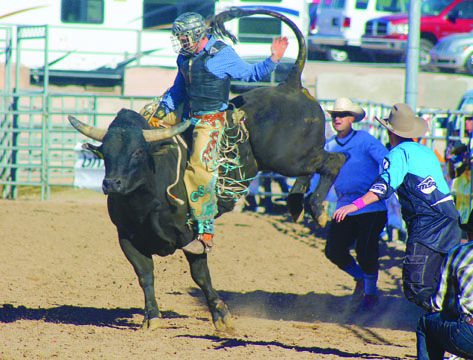 Efren Gallego took first place after scoring 77 points in Saturday's go-round. On Sunday Gallego was bucked early, but he was able to hold on to the No. 1 spot. 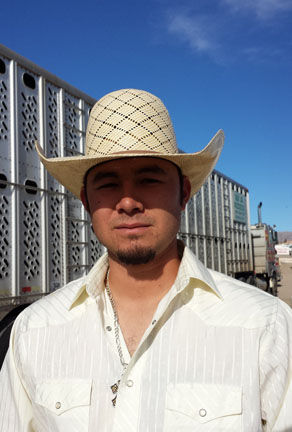 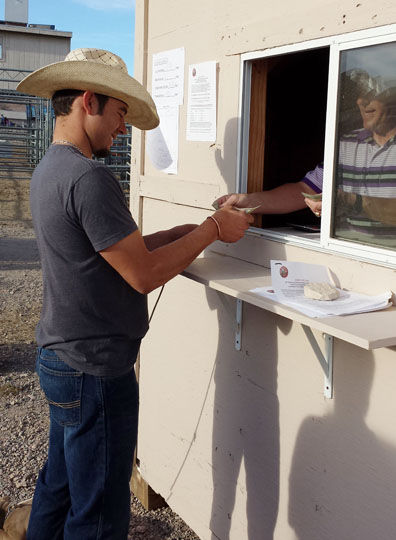 Efren Gallego collets his cash prize for taking first place in the bull riding event. Gallego said he would treat his brothers, Alonso and Joel, to dinner with his winnings

Efren Gallego took first place after scoring 77 points in Saturday's go-round. On Sunday Gallego was bucked early, but he was able to hold on to the No. 1 spot.

Efren Gallego collets his cash prize for taking first place in the bull riding event. Gallego said he would treat his brothers, Alonso and Joel, to dinner with his winnings

Efren Gallego wasn’t allowed to rid on ranch animals while growing up, but it didn’t stop him from become the bull rider he always wanted to be.

While many cowboys follow a progression of riding sheep, calfs, steers, and then bulls, that wasn’t an option for Gallego because on his ranch in Elfrida where he grew up, his mom wouldn’t allow him to ride animals.

“I think I was kind of born into this (cowboy) lifestyle. I was always a fan of doing what my mom told me not to do,” Gallego said.

Gallego said him and his younger brothers would sneak rides on steers when his parents were away from the ranch and his experience as a youth was very limited.

So when Gallego turned 18 he signed the wavers that allowed him to ride the bulls.

“I won my first rodeo on my second bull ride,” Gallego said. “I was hooked.”

Gallego opened up the sport to his younger brothers. Alonso and Joel who also competed in the Delbert Days Rodeo. He said his mother even supports him in his bull riding nowadays.

In the world of rodeo, Gallego said bull riders get a lot of respect, and they are usually a little crazier than most people.

“It takes a tough guy, and a real cowboy to ride a bull,” he said. “But the bullfighters (the cowboys who tame the bulls in the arena and protect the riders) are even crazier than bull riders. Out of respect they are the toughest cowboys out of all of them.”

When all is said and done, Gallego said he cares and is grateful to his brothers, because they are his support system and his best friends while he is on the road. And to show that gratitude he said he would take his brothers out for a nice dinner with the $747 cash he received for taking first place.

Keeping fit with no gyms open is a new NBA challenge

Denver’s players, if they're so willing, have the same assignment each day: Go to …

Photos: WORCS races through the weekend