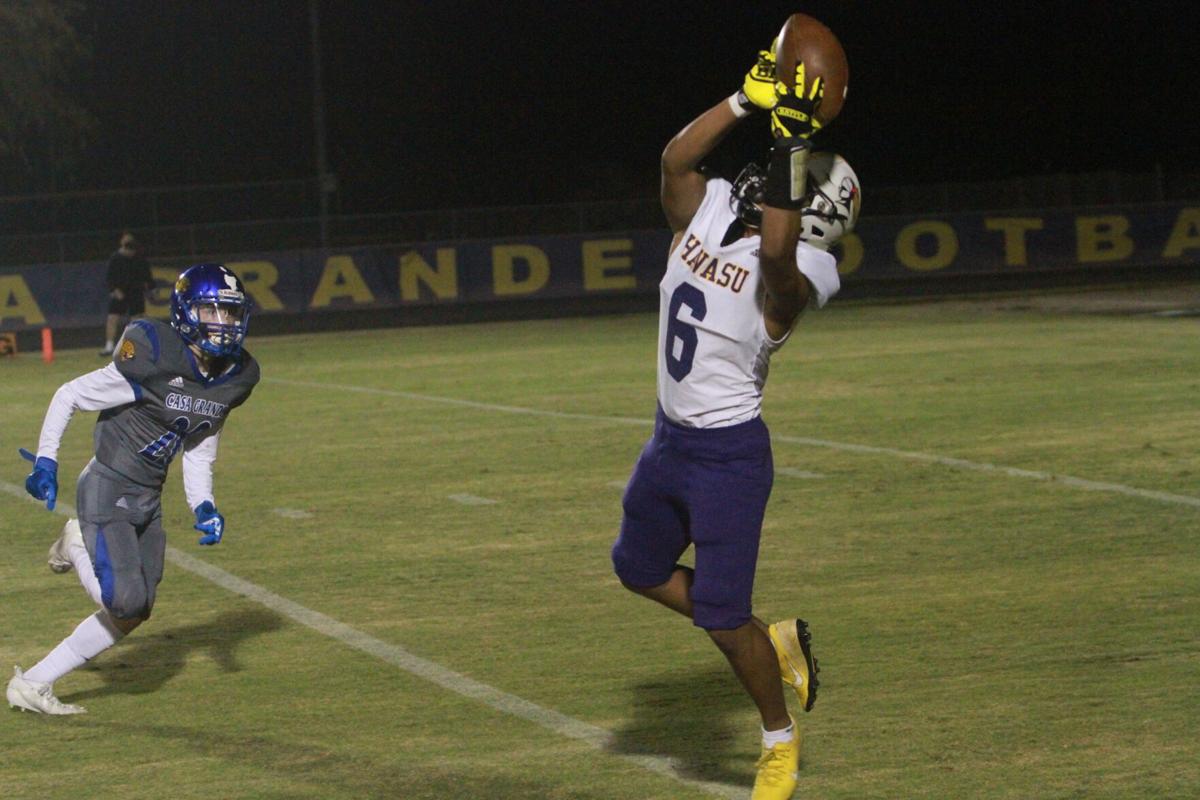 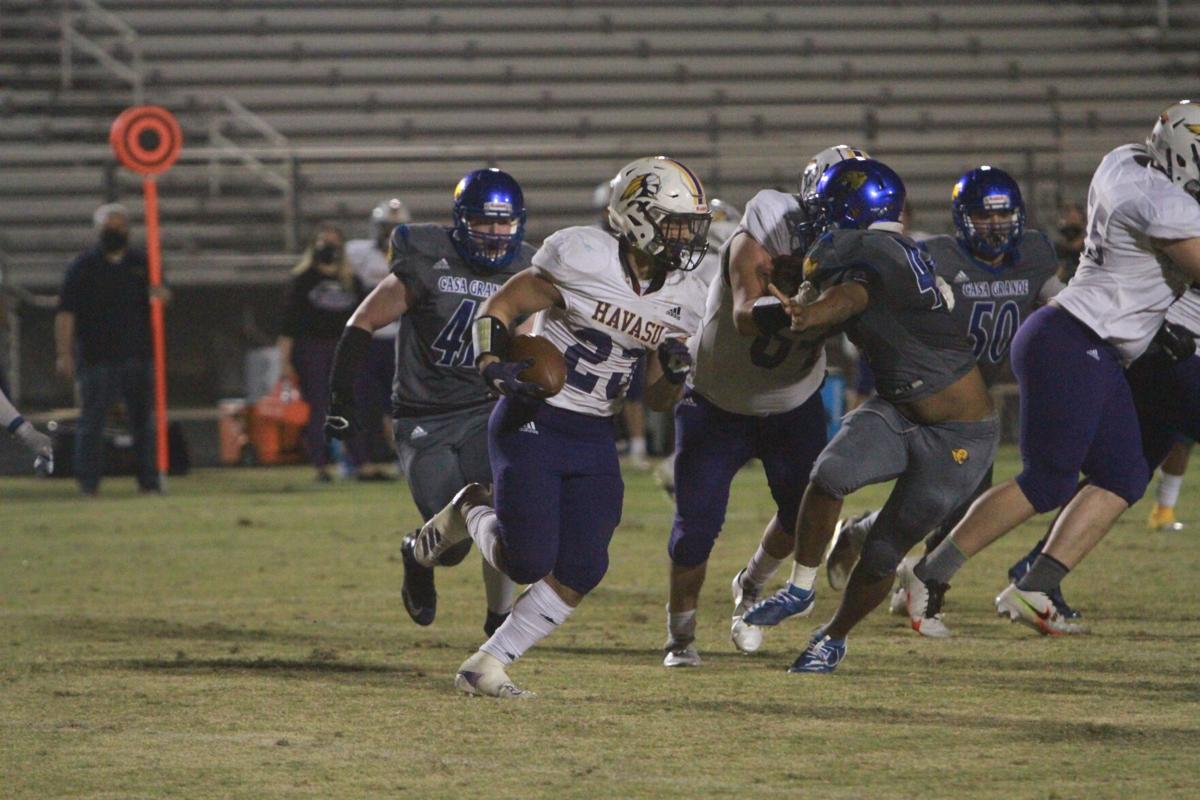 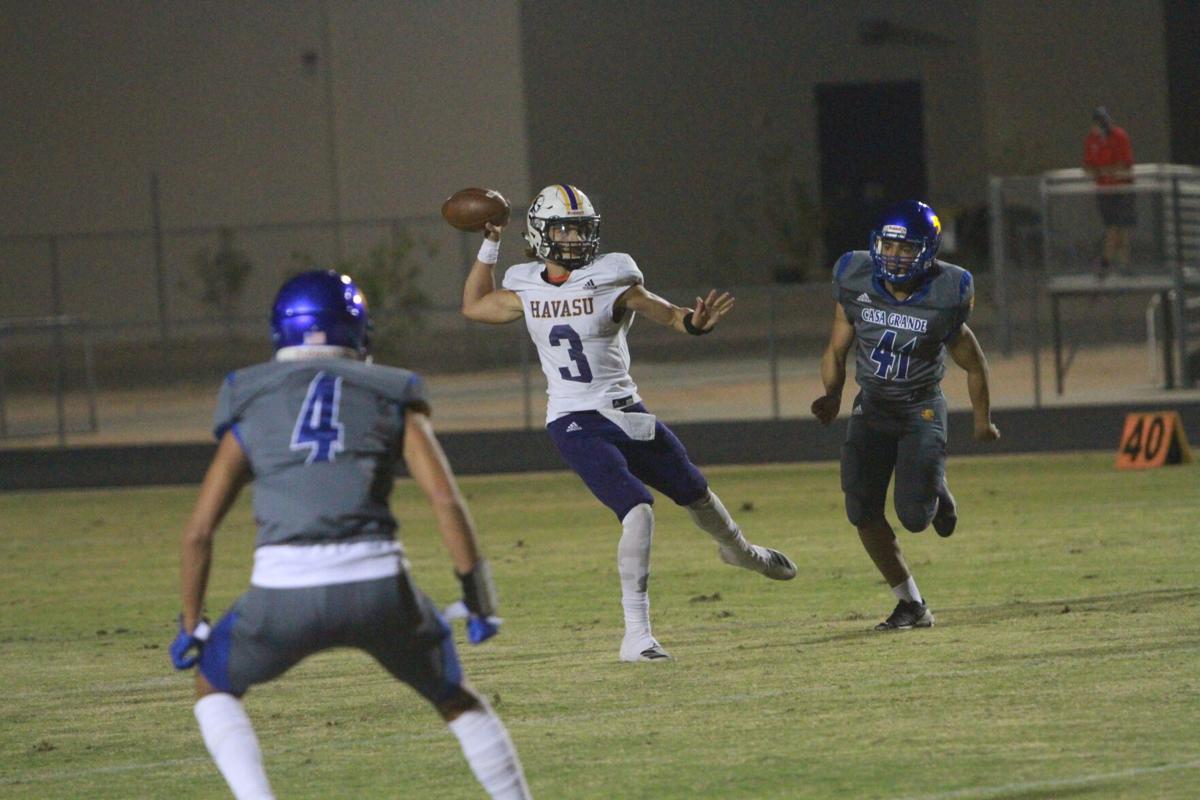 Despite the 2020 campaign ending with a loss in the 4A play-in round, Lake Havasu head coach Karl Thompson considered this season a success, especially with the lack of an offseason with a young roster and a new coaching staff.

“We played a very competitive schedule,” Thompson said. “When you play, at the time, Casa Grande No. 1 or No. 2 in the state [in the 4A conference], Glendale at No. 8, Estrella Foothills at No. 13…you’re playing top caliber teams. Buckeye was in that mix, Deer Valley, you’re playing a very competitive schedule. The campaign with these guys with that schedule, it was a great year for us.”

In their first postseason appearance in five years, the Knights’ season ended Friday with a 62-28 loss to 4A contender Casa Grande on the road. Havasu (4-4) was the 15th-ranked team in the conference while the Cougars (6-1) was No. 2. Casa Grande was re-seeded on Saturday to No. 1 for the 4A state tournament, which starts next week.

Compared to their 52-7 loss to the Cougars in week two, the Knights looked like the better team for majority of the first half, leading Casa Grande by 14 points twice.

Havasu looked poised to pull off the upset, taking an early 14-0 lead on two touchdowns from Isaac Stopke from 1 and 21 yards. Stopke’s first touchdown run came in the first quarter while his other score occurred in the second.

After the Cougars made it a one score game, Stopke scored his third touchdown of the night, catching a 6-yard pass from Donny Fitzgerald. RJ Keeton and Angel Flores each ran for a Casa Grande score to tie the game 21-21 at halftime.

“We came out ready to play, especially from the beginning,” Thompson said. “Our guys were very tuned in. They knew what the task was at hand. Just a little bit of depth got caught up with us.”

The Cougars took their first lead of the game inside the first minute of the second half on touchdown run from Keeton. In the Knights’ first possession of the half, Fitzgerald threw an 84-yard touchdown pass to Cody Pellaton to tie the game 28-28 with 10:16 left in the third quarter.

Those would be Havasu’s final points of the night, as the Knights were shut down offensively for the remainder of the game en route to getting outscored 41-7 in the second half.

Havasu’s early season loss to the Cougars was its second of the season and dropped the Knights to a 0-2 start. In its first two games, Havasu was outscored 33-100 and it was starting to look like a rebuilding year for the Knights, but the team made tremendous strides after week two.

The program will have much to build on with only 11 seniors departing program. Fitzgerald, defensive end Jon Justice, receiver/defensive back Cole Fuller, tight end/linebacker Aaron Bracamonte, linebacker Bubba Brandel, and offensive/defensive lineman Jace Strong are among the 11 players leaving.

Players who are expected to return next year include Stopke, Pellaton, Brenton Szymanski, Quinten Anderson, and Glen Adona. All four have contributed on both sides of the ball this year.

With a talented group slated to return, Thompson hopes to have “some type” of an offseason after the team’s summer workouts were shut down this year.

“Our guys got a lot of experience,” Thompson said. “A lot of guys that will be returning will know the effort that’s needed to get to the playoffs. Now, we need to see the effort to be successful in the playoffs.”

In the most unusual high school football season in recent memory, not only did the Knights get to play all eight of their scheduled games, but they were successful in using covid-19 precautions to avoid an outbreak. Multiple football programs across the state had issues with the virus this season including two teams in 4A forfeiting their play-in games.

Thompson praised Lake Havasu High Athletic Director Dustin Zampogna for coming up with a plan of safety protocols to conduct practices along with the guidelines set by the Arizona Interscholastic Association.

Thompson added that “everybody had to their part,” to make sure they were following guidelines all season.

“We stressed from having to wear the masks even on the bus, the locker room, practice time when you weren’t doing stuff,” Thompson said. “All those things came into play. When you have those safety protocols and procedures and you enforced and the players are compliant, maybe it was because we did a lot of things right or maybe because we were lucky.

Havasu hangs with No. 2 Casa Grande early, lose steam in second half

CASA GRANDE — The final score won’t show it, but the Lake Havasu Knights put a big scare into the second-ranked team in the 4A conference, lea…

Despite the 2020 campaign ending with a loss in the 4A play-in round, Lake Havasu …

Cardinals DL Peters out for season with knee injury

LAS VEGAS (AP) — Not so long ago, the UFC men's flyweight division was so thin and…